Green hydrogen is entering hockey stick territory: the point where it sees a sudden and sharp turn upward. A boom in the supply of and demand for the environment-friendly gas will power a whopping 120-fold global expansion in the key equipment used to split water and produce hydrogen.

Installations of electrolyzers are set to grow from 2 gigawatts currently to 242 gigawatts over the next eight years, with companies like Longi Green Technology, John Cockerill, Plug Power, ITM Power and ThyssenKrupp leading the manufacturing, according to BloombergNEF. Cumulatively, around $130 billion will be spent on electrolyzers between now and 2030. 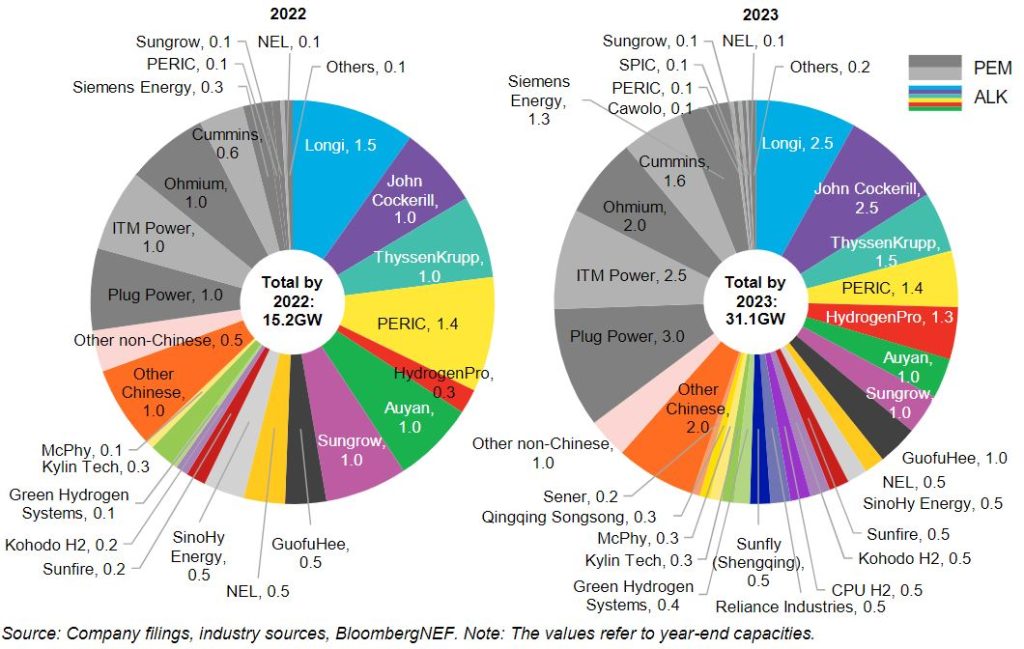 But the US is seeking to catch up, with at least $20 billion in supply-side incentives on offer from the federal government. The biggest offering comes from new hydrogen production tax credits that can provide up to $3 per kilogram of gas produced. That makes low-carbon hydrogen immediately competitive with its fossil counterpart in many parts of the US. By the end of the decade, the credits could make low-carbon hydrogen from the US the cheapest in the world — well below the $1 per kilogram benchmark goal set by the US Department of Energy.

Clean hydrogen has a critical role to play in a net-zero emissions world, providing a solution for hard-to-decarbonize sectors such as steel making, chemicals manufacturing and heavy-duty transport. It is expected to become increasingly cost competitive as deployments rise.

Some market players now see green hydrogen as being in the same spot as solar was before its boom years.

There are a few risks to the imminent high-growth phase. A significant volume of renewable energy is required to power the electrolyzers so delays in adding clean power could impact the growth of the industry, as might the pace of growth in the rest of the hydrogen supply chain, said Bhashyam. BNEF doesn’t see electrolyzer manufacturing capacity becoming a constraint to deployment this decade if companies implement near-term plans, however.

Localizing Clean Energy Value Chains Will Come at a Cost