Net-zero emissions can be reached via many pathways by mid-century, but none are easy, and none are certain. One thing is clear: there needs to be an immediate, unprecedented acceleration in deployment of existing technology in the coming decade, be that renewable energy, heat pumps or electric vehicles. In the twenty years from 2030 to 2050, decarbonization needs to accelerate in harder-to-abate sectors, and new technologies that complement clean power such as hydrogen, CCS and small modular nuclear, have to be rolled out.

BloombergNEF’s New Energy Outlook 2021 describes three climate scenarios to meet net-zero emissions and keep global average surface temperatures well below two degrees above pre-industrial levels. The first of them, BNEF’s Green Scenario, describes a pathway where greater use of clean electricity in the end-use economy is complemented by so-called “green hydrogen”, produced from water, using electrolyzers powered by wind and PV. Biofuels and recycling also play minor roles. Within the Green Scenario, the following solutions play a role in abating emissions in line with the Paris Agreement: 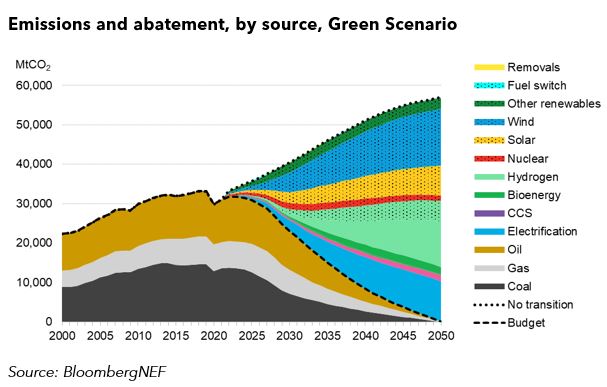 Hydrogen has many applications in abating emissions and has a prominent role in the Green Scenario to help reach net-zero emissions. Here, overall demand for hydrogen increases to 1,318 million tons by 2050. It is used most in the power sector to power hydrogen-fired gas turbines complementing wind and solar PV, accounting for 42% or 553 million tons of demand. Of the end-use sectors, hydrogen is used most in industry, at 341 million tons in 2050, of which 39% is used in steel production. A further 161 million tons goes to the transport sector, mainly driven by aviation – which accounts for 95 million tons – and medium and heavy commercial vehicles – accounting for 30 million tons. The use of hydrogen in buildings is relatively small, standing at 102 million tons in 2050 – two-thirds of which goes to residential buildings. 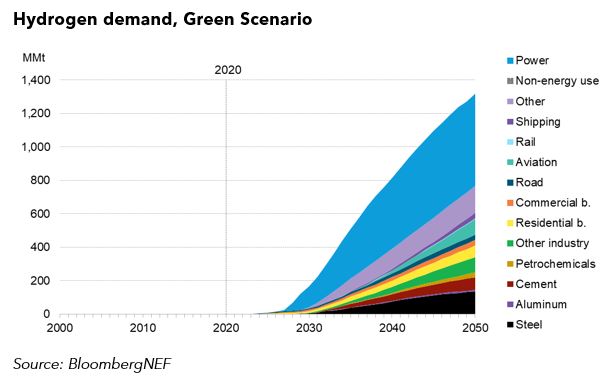 The large role of clean electricity and green hydrogen in the Green Scenario means this one also sees the highest uptake of variable renewables across all of BNEF’s scenarios. They provide almost 85% of the required electricity generation in the Green Scenario, of which 52% will come from wind and another 32% from solar. By 2050, there’s around 16.5 terawatts of utility-scale solar PV, 15.4 terawatts of onshore wind and 9.8 terawatts of offshore wind. This is, respectively, three times, four times and 28-times as much capacity as in BloombergNEF’s Economic Transition Scenario. Around 56% of all utility-scale PV and wind capacity is used to power electrolyzers and produce hydrogen, while the remaining renewables capacity serves electricity demand in direct end-use. 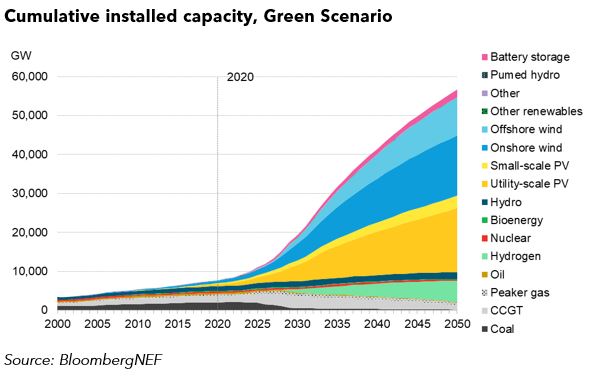 While this presents a massive investment opportunity – around $64 trillion in power generation assets alone will be required to supply the end-use economy as well as electrolyzers – this will require an unprecedented scale-up of supply chains across the world. As wind and solar PV take up significantly more space than conventional coal or gas capacity some countries might face land constraints and may have to look for alternative pathways. Or, if hydrogen is to play a major role in their long-term energy strategy, these countries will most likely need to import hydrogen, shift domestic production to offshore renewables, or produce it via dedicated nuclear electrolysis. Alternatively, these countries could put a higher emphasis on direct electrification or pursue carbon capture and storage instead.