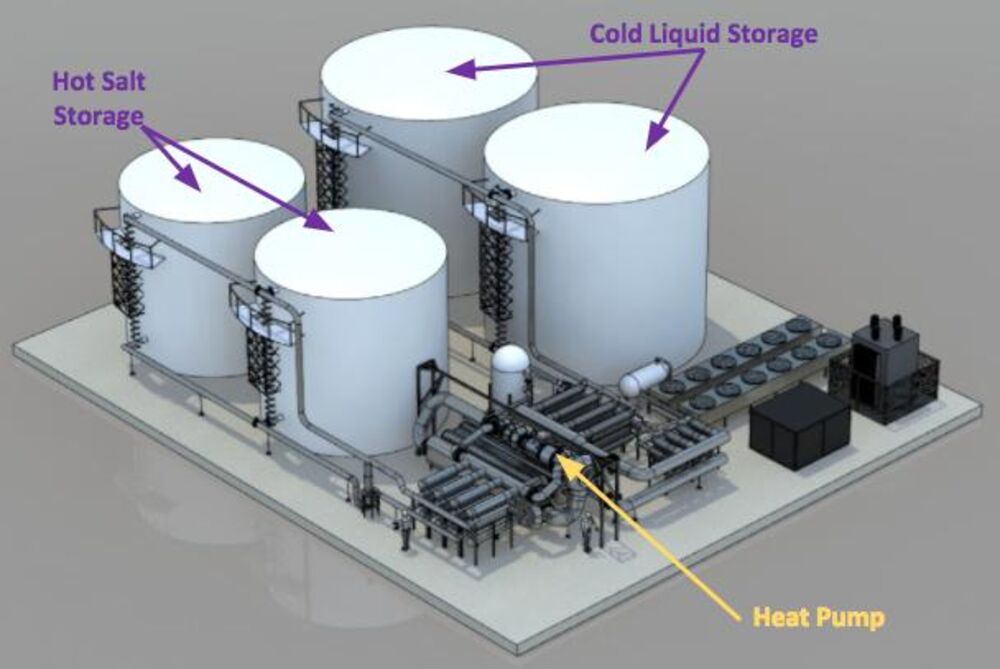 Alphabet Inc.’s secretive X skunk works has another idea that could save the world. This one, code named Malta, involves vats of salt and antifreeze.

The research lab, which hatched Google’s driverless car almost a decade ago, is developing a system for storing renewable energy that would otherwise be wasted. It can be located almost anywhere, has the potential to last longer than lithium-ion batteries and compete on price with new hydroelectric plants and other existing clean energy storage methods, according to X executives and researchers.

The previously undisclosed initiative is part of a handful of energy projects at X, which has a mixed record with audacious “moonshots” like Google Glass and drone delivery. Venture capitalists, and increasingly governments, have cut funding and support for technology and businesses built around alternatives to fossil fuels. X’s clean-energy projects have yet to become hits like its driverless cars, but the lab isn’t giving up.

“If the moonshot factory gives up on a big, important problem like climate change, then maybe it will never get solved,” said Obi Felten, a director at X. “If we do start solving it, there are trillions and trillions of dollars in market opportunity.”

She runs The Foundry, where a Malta team of fewer than 10 researchers is testing a stripped-down prototype. This is the part of X that tries to turn experiments in science labs into full-blown projects with emerging business models, such as its Loon internet-beaming high-altitude balloons. Malta is not yet an official X project, but it has been “de-risked” enough that the team is now looking for partners to build, operate and connect a commercial-sized prototype to the grid, Felten said. That means Alphabet may team up or compete with industrial powerhouses like Siemens AG, ABB Ltd. and General Electric Co.

X is stepping into a market that could see about $40 billion in investment by 2024, according Bloomberg New Energy Finance. Roughly 790 megawatts of energy will be stored this year and overall capacity is expected to hit 45 gigawatts in seven years, BNEF estimates. Existing electrical grids struggle with renewable energy, a vexing problem that’s driving demand for new storage methods. Solar panels and wind farms churn out energy around midday and at night when demand lulls. This forces utilities to discard it in favor of more predictable oil and coal plants and more controllable natural gas “peaker” plants.

In the first half of this year, California tossed out more than 300,000 megawatts produced by solar panels and wind farms because there’s no good way to store it. That’s enough to power tens of thousands of homes. About 4 percent of all wind energy from Germany was jettisoned in 2015, according to Bloomberg New Energy Finance. China throws out more than 17 percent.

Felten is particularly excited about working with companies in China, a voracious energy consumer — and a country where almost all Google web services are banned. Before that happens, the Malta team has to turn what is now an early test prototype in a warehouse in Silicon Valley into a final product that can be manufactured and is big and reliable enough for utilities to plug it into electricity grids.

In renderings, viewed by Bloomberg News, the system looks like a miniature power plant with four cylindrical tanks connected via pipes to a heat pump. X says it can vary in size from roughly the dimensions of a large garage to a full-scale traditional power plant, providing energy on demand to huge industrial facilities, data centers or storage for small wind farms and solar installations.

The system mixes an established technique with newly designed components. “Think of this, at a very simple level, as a fridge and a jet,” said Julian Green, the product manager for Malta.

Two tanks are filled with salt, and two are filled with antifreeze or a hydrocarbon liquid. The system takes in energy in the form of electricity and turns it into separate streams of hot and cold air. The hot air heats up the salt, while the cold air cools the antifreeze, a bit like a refrigerator. The jet engine part: Flip a switch and the process reverses. Hot and cold air rush toward each other, creating powerful gusts that spin a turbine and spit out electricity when the grid needs it. Salt maintains its temperature well, so the system can store energy for many hours, and even days, depending on how much you insulate the tanks.

Scientists have already proven this as a plausible storage technique. Malta’s contribution was to design a system that operates at lower temperatures so it doesn’t require specialized, expensive ceramics and steels. “The thermodynamic physics are well-known to anyone who studied it enough in college,” Green said. “The trick is doing it at the right temperatures, with cheap materials. That is super compelling.”

But lithium-ion battery prices are falling quickly, according to Bloomberg New Energy Finance. And Malta must contend with low oil and natural gas prices, a market reality that’s wiped out several companies working on alternatives to fossil fuels. “It could potentially compete with lithium-ion,” said Bloomberg New Energy Finance analyst Yayoi Sekine. “But there are a lot of challenges that an emerging technology has to face.”

One hurdle is convincing energy incumbents to put capital into a project with potential returns many years down the road. Alphabet has the balance sheet to inspire confidence, with $95 billion in cash and equivalents. Yet the tech giant has a recent history of retreating from or shutting experimental projects that stray from its core areas of high-power computing and software.

Robert Laughlin, a Nobel prize-winning physicist whose research laid the foundation for Malta, is now a consultant on the project. He met X representatives at a conference a few years ago. They discussed the idea, and the lab ultimately decided to fund the project and build a small team to execute it. Laughin has signed off on the team’s designs, and he said his theories have been working with the prototype.

Laughlin believes X is more committed than previous potential backers. He first pitched the idea as his own startup, taking it to luminary tech investors including Khosla Ventures and Peter Thiel’s Founders Fund. They passed, according to the scientist, because they didn’t want to deal with the tougher demands of a conservative energy industry that will have to buy and use the system in the end. “What we’re talking about here is engines and oil companies — big dinosaurs with very long teeth,” said Laughlin. That’s “above the pay grade of people out here.” A representative from Founders Fund declined to comment. Khosla didn’t respond to requests for comment.

X won’t say how much it has invested so far, but it’s enough for Laughlin. “A blessing came out of the sky,” he said. “X came in and took a giant bite out of this problem.”