Artificial Intelligence Will Become an Essential Part of Industrial Policy

Governments around the world are rushing to set artificial intelligence (AI) policies in 2020 as nations recognize the technologies’ potential, and possible drawbacks. Twenty one out of the 40 countries reviewed in BloombergNEF’s 2020 National Industrial Digitalization ranking announced new AI policies or initiatives since mid-2019.

BNEF’s 2020 ranking (press release) reveals the industrial digitalization progress of 40 countries using metrics in investment, governance, workforce and technology. A high score indicates active digital efforts, and the potential for future scaling, across industry and government, backed by the capital, skills and technology. AI policy, funding, targets and regulation are front of center of the strategy for top countries from the ranking ─ South Korea, Singapore and Germany. Each has launched national AI strategies while also outlining draft guidelines to regulate its use.

Policies aim to incentivize AI use…

AI is a top technology focus for countries racing to create technology economies. Governments are forming AI policies in two ways: incentivizing uptake and regulating use.

South Korea, which took top spot in BNEF’s 2020 ranking, established a national strategy for AI, within which it allocates 1 trillion won ($870 million) over 10 years to develop an AI semiconductor industry. Additional funding has been pledged toward AI research and development, including the formation of six AI graduate schools. AI policies appear to be most effective when aimed specifically at key sectors within an economy (such as computer chips in Korea). Other countries are still in the process of understanding what a national AI strategy might look like for their country. For example, Brazil has launched a public consultation to guide the formation of its national AI plan and identify opportunities in education, R&D and ethics.

… and regulate AI use

While encouraging the use of AI, governments are keen to ensure the technology is being developed and applied responsibly. Most nations already have regulations in place to safeguard data use, however few regulations exist for the use of AI. Regulators are cautiously crafting draft policies and proposals that will first undergo public consultation.

For example, in February the European Commission launched an AI white paper as part of its digital strategy, outlining a new regulatory framework for the use of AI. The white paper recommends six requirements that could together comprise new regulations for ‘high-risk’ use cases of AI such as facial recognition and autonomous machinery. Similarly, in January this year the U.S. White House released draft guidance on AI with 10 principles for agencies to consider when deciding whether and how to regulate AI.

While some countries are developing their own AI frameworks, many have signed up to the OECD principles on AI. In May 2019, the OECD’s 36 member countries, along with Argentina, Brazil, Colombia, Costa Rica, Peru and Romania, signed up. It comprises five values-based principles for responsible deployment of trustworthy AI and five recommendations for public policy and international co-operation.

AI will both create and displace jobs

In recent years, demand for workers with digital skills and a knowledge of building AI algorithms has skyrocketed. At the same time, AI is automating some forms of data collection, processing and customer communication, which threatens the jobs of low-skilled workers. 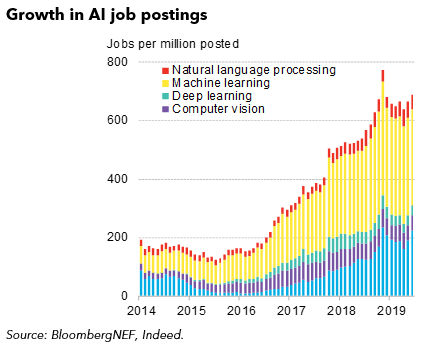 Through AI policies and digital strategies, governments are trying to ensure they have citizens who can take advantage of AI, rather than be displaced by it. Policies include investing in STEM education and nationwide upskilling programs, to ensure workers have the skills to compete in a digital economy. For example, the U.K.’s AI sector deal has allocated 406 million pounds ($530 million) toward addressing the shortage of science, technology and engineering skills. Other countries are issuing visas to attract skilled foreign workers to meet the skills shortage. In March, Germany launched the skilled immigration act to attract 25,000 more workers per year, targeting IT, engineering and STEM skills.

Countries are also forming partnerships with private companies to help retrain the workforce. For example, Malaysia partnered with Coursera during the pandemic to train the nation’s workforce on technical skills. Workers have unlimited access to 3,800 courses and professional certificate programs through 2020. Australia’s digital transformation agency has partnered with Microsoft Azure to build digital skills in the public sector through cloud technology training. In India, the central board of secondary education has integrated an AI course into its curriculum, developed in partnership with IBM.

Policy makers are carefully shaping standalone policies to maximize AI’s potential while minimizing its risks. We expect more governments to launch national AI strategies and policies in 2020 and beyond. Additional focus will be geared toward forming suitable AI regulation that can ensure AI is developed responsibly, without stifling innovation.

Covid-19 stalled policy progress in some South American and African countries but also accelerated digitalization projects across other regions and sectors. Digital technologies including AI featured prominently in many large stimulus packages over the past months.