Hong Kong and London, November 30, 2021 – Lithium-ion battery pack prices, which were above $1,200 per kilowatt-hour in 2010, have fallen 89% in real terms to $132/kWh in 2021[1]. This is a 6% drop from $140/kWh in 2020. Continuing cost reductions bode well for the future of electric vehicles, which rely on lithium-ion technology. However, the impact of rising commodity prices and increased costs for key materials such as electrolytes has put pressure on the industry in the second half of the year.

These prices are an average across multiple battery end-uses, including different types of electric vehicles, buses and stationary storage projects. For battery electric vehicle (BEV) packs in particular, prices were $118/kWh on a volume-weighted average basis in 2021. At the cell level, average BEV prices were just $97/kWh. This indicates that on average, cells account for 82% of the total pack price. Over the past two years, the cell-to-pack cost ratio has diverged from the traditional 70:30 split, a result of changes to pack design, such as the introduction of cell-to-pack designs.

On a regional basis, battery pack prices were cheapest in China, at $111/kWh. Packs in the U.S. and Europe cost 40% and 60% higher, respectively. This reflects the relative immaturity of these markets, the diverse range of applications and, for the higher end of the range, low volume and bespoke orders.

Prices continued to fall in 2021 as the adoption of the low-cost cathode chemistry known as lithium iron phosphate (LFP) increased, and as the use of expensive cobalt in nickel-base cathodes continued to slide. On average, LFP cells were almost 30% cheaper than NMC cells in 2021. However, even low-cost chemistries like LFP, which is particularly exposed to lithium carbonate prices, have felt the bite of rising costs throughout the supply chain. Since September, Chinese producers have raised LFP prices by between 10-20%.

Based on historical trends, BNEF’s 2021 Battery Price Survey, which was launched in time for the virtual BNEF Summit Shanghai, predicts that by 2024 average pack prices should be below $100/kWh. It is at around this price point that automakers should be able to produce and sell mass-market EVs at the same price (and with the same margin) as comparable internal combustion vehicles in some markets. This assumes no subsidies are available, but actual pricing strategies will vary by automaker and geography.

However, higher raw material prices mean that in the near-term, average pack prices could rise to $135/kWh in 2022 in nominal terms. In the absence of other improvements that can mitigate this impact, this could mean that the point at which prices fall below $100/kWh could be pushed back by two years. This would impact EV affordability or manufacturers’ margins and could hurt the economics of energy storage projects.

James Frith, BNEF’s head of energy storage research and lead author of the report, said: “Although battery prices fell overall across 2021, in the second half of the year prices have been rising. We estimate that on average the price of an NMC (811) cell is $10/kWh higher in the fourth quarter than it was in the first three months of the year, with prices now closing in on $110/kWh. This creates a tough environment for automakers, particularly those in Europe, which have to increase EV sales in order to meet average fleet emissions standards. These automakers may now have to make a choice between reducing their margins or passing costs on, at the risk of putting consumers off purchasing an EV.” 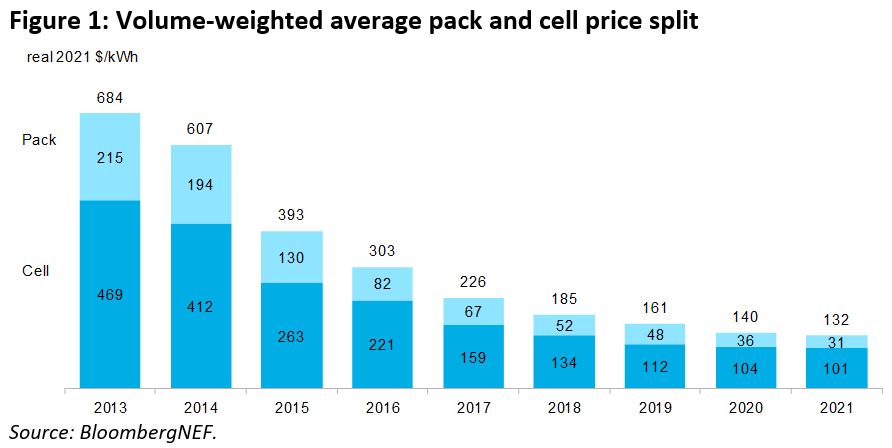 Kwasi Ampofo, head of metals and mining at BloombergNEF said: “Prices for lithium have risen substantially this year as a result of constraints within global supply chains, rising demand in China and Europe and the recent production curbs in China. Although we expect demand to keep growing in 2022, other factors such as global supply-chain constraints and China’s production curbs should have been resolved by 1Q 2022. This will help to ease lithium prices.”

The path to achieving $100/kWh is clear, although the timing now looks more uncertain. In 2021, a wave of automakers released battery technology roadmaps outlining how prices can be reduced below $100/kWh. Companies like Renault and Ford have publicly announced targets of $80/kWh by 2030.

Continued investment in R&D alongside capacity expansion across the supply chain will help to improve battery technology and reduce costs over the next decade. BloombergNEF expects next-generation technologies, such as silicon and lithium metal anodes, solid-state electrolytes and new cathode material and cell manufacturing processes, to play an important role in enabling these price reductions.