London and New York, March 26, 2019 – Two technologies that were immature and expensive only a few years ago but are now at the center of the unfolding low-carbon energy transition have seen spectacular gains in cost-competitiveness in the last year.

The latest analysis by research company BloombergNEF (BNEF) shows that the benchmark levelized cost of electricity,[1] or LCOE, for lithium-ion batteries has fallen 35% to $187 per megawatt-hour since the first half of 2018. Meanwhile, the benchmark LCOE for offshore wind has tumbled by 24%.

Onshore wind and photovoltaic solar have also gotten cheaper, their respective benchmark LCOE reaching $50 and $57 per megawatt-hour for projects starting construction in early 2019, down 10% and 18% on the equivalent figures of a year ago.

Elena Giannakopoulou, head of energy economics at BNEF, commented: “Looking back over this decade, there have been staggering improvements in the cost-competitiveness of these low-carbon options, thanks to technology innovation, economies of scale, stiff price competition and manufacturing experience.

“Our analysis shows that the LCOE per megawatt-hour for onshore wind, solar PV and offshore wind have fallen by 49%, 84% and 56% respectively since 2010. That for lithium-ion battery storage has dropped by 76% since 2012, based on recent project costs and historical battery pack prices.”

The most striking finding in this LCOE Update, for the first-half of 2019, is on the cost improvements in lithium-ion batteries. These are opening up new opportunities for them to balance a renewables-heavy generation mix.

Batteries co-located with solar or wind projects are starting to compete, in many markets and without subsidy, with coal- and gas-fired generation for the provision of ‘dispatchable power’ that can be delivered whenever the grid needs it (as opposed to only when the wind is blowing, or the sun is shining).

Electricity demand is subject to pronounced peaks and lows inter-day. Meeting the peaks has previously been the preserve of technologies such as open-cycle gas turbines and gas reciprocating engines, but these are now facing competition from batteries with anything from one to four hours of energy storage, according to the report.

Tifenn Brandily, energy economics analyst at BNEF, said: “Solar PV and onshore wind have won the race to be the cheapest sources of new ‘bulk generation’ in most countries, but the encroachment of clean technologies is now going well beyond that, threatening the balancing role that gas-fired plant operators, in particular, have been hoping to play.”

Offshore wind has often been seen as a relatively expensive generation option compared to onshore wind or solar PV. However, auction programs for new capacity, combined with much larger turbines, have produced sharp reductions in capital costs, taking BNEF’s global benchmark for this technology below $100 per MWh, compared to more than $220 just five years ago.

Giannakopoulou said: “The low prices promised by offshore wind tenders throughout Europe are now materializing, with several high-profile projects reaching financial close in recent months. Its cost decline in the last six months is the sharpest we have seen for any technology.”

Although the LCOE of solar PV has fallen 18% in the last year, the great majority of that decline happened in the third quarter of 2018, when a shift in Chinese policy caused there to be a huge global supply glut of modules, rather than over the most recent months. 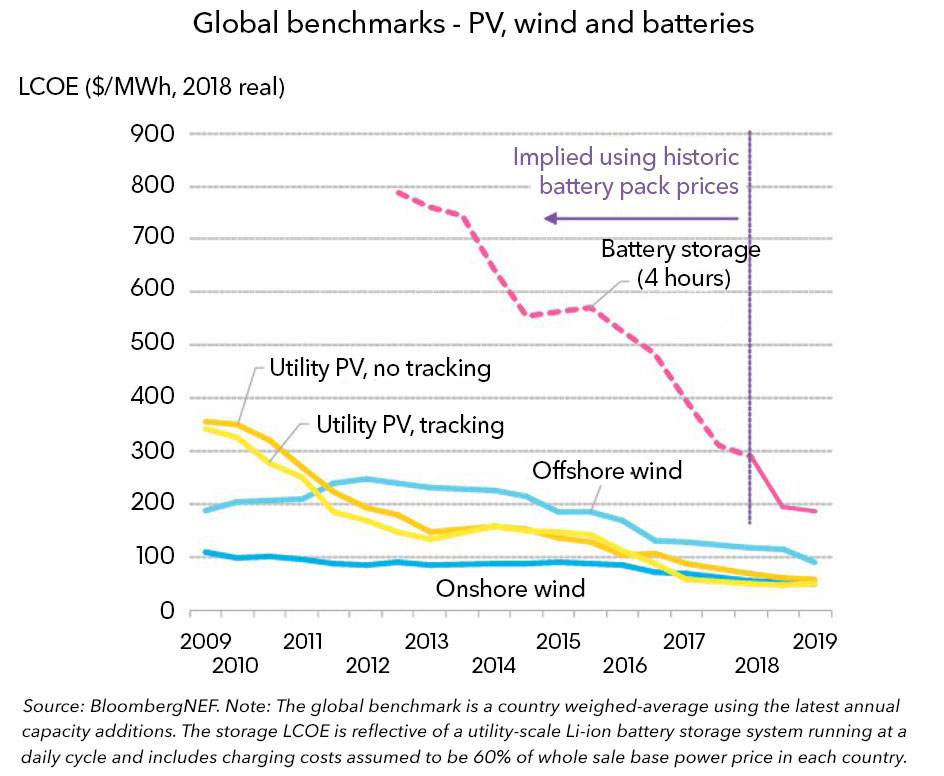 BNEF’s LCOE analysis is based on information on real projects starting construction and proprietary pricing information from suppliers. Its database covers nearly 7,000 projects across 20 technologies (including the various types of coal, gas and nuclear generation as well as renewables), situated in 46 countries around the world.

[1] LCOE measures the all-in expense of producing a MWh of electricity from a new project, taking into account the costs of development, construction and equipment, financing, feedstock, operation and maintenance.