The latest battle for Iraq’s future is unfolding around the country’s oldest oil field.

Federal government troops pushed back forces from the semi-autonomous Kurdish region with a rapid thrust into Kirkuk province in northern Iraq, breaking a stand-off over the long-disputed area. Baghdad wants to reassert control of the area’s oil deposits from Kurdish fighters, who seized the territory and its capital city, also called Kirkuk, to ward off Islamic State militants in 2014. The Kurds, who voted overwhelmingly for independence in a referendum last month, see the resources as a financial lifeline for a future state.

Kirkuk’s oil, discovered by the forebears of BP Plc and Total SA in 1927, lies in one of the Middle East’s great fields. Its long anticline — the ridge in the Earth’s crust trapping the accumulation of oil — can be easily seen from the air, running straight through Kirkuk city, home to almost a million people.

Crude flowed from Kirkuk 10 years before Saudi Arabia struck oil and two decades before the kingdom found the giant Ghawar field. Kirkuk’s oldest well, Baba Gurgur, earned its name — the Kurdish term for “Father of Fire” — for the flames fed by hydrocarbons oozing to the surface in a nearby pit. Local lore has it that the fire has been burning for centuries.

While the area around Kirkuk now pumps just about a 10th of Iraq’s total output of 4.5 million barrels a day, according to estimates compiled by Bloomberg, it remains a valuable prize. 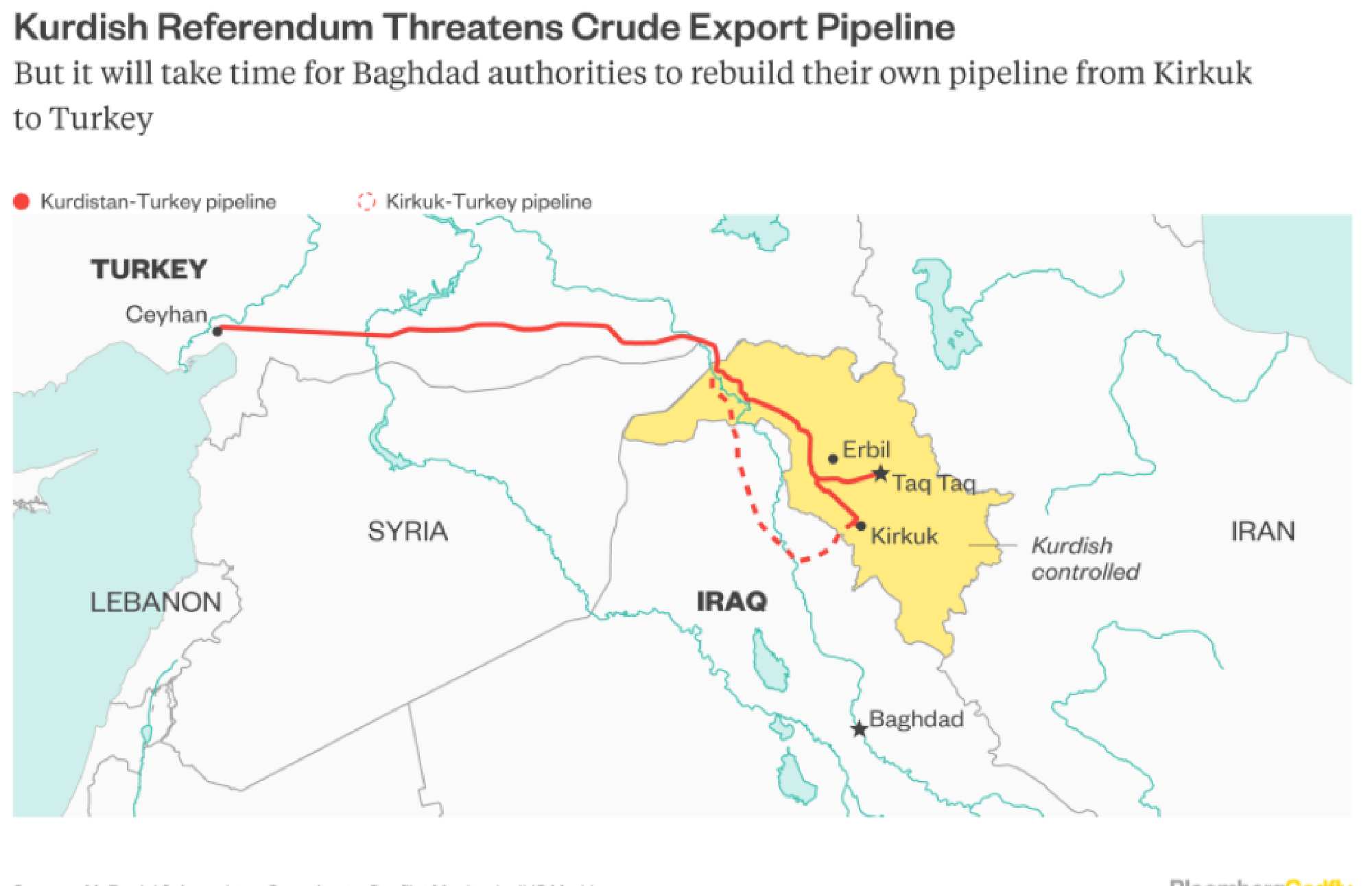 As foreign investment dollars flowed into Iraq’s giant southern oil fields after the overthrow of Saddam Hussein, production in the northern region has been locked in the past. After suffering years of mismanagement under the former dictator — his regime pumped unwanted fuel oil from a local refinery back into the field — Iraq’s failure to pass and enforce a national oil law and set up lasting revenue-sharing arrangements prevented the disputed areas from gaining a benefit from foreign investment.

BP studied ways to boost output in the area as recently as 2015, a project made impossible by the prolonged fight against Islamic State militants. The latest hostilities add to questions over the oil region’s future.

“Even should stability return to the region, this conflict raises uncertainty on where the Kirkuk fields will lie in the list of future Iraqi development priorities,” analysts including Damien Courvalin at Goldman Sachs Group Inc. wrote in a note published on Tuesday.

As for oil markets, most of the crude pumped at the Kirkuk field flows through a Kurdish-operated pipeline to reach foreign buyers. A closure of this link “would have the largest consequences for global oil balances as, without significant domestic storage capacity, most production would need to be shut in,” the analysts said.

After routing the Islamist group from areas in the north and west, Iraq’s federal forces and Kurdish fighters find themselves facing off over the field. By Tuesday, Baghdad’s troops had seized two oil-well clusters that produce almost 300,000 barrels a day between them.

The battle is part of a wider power struggle involving Iran, Turkey and Syria, all of which have large Kurdish populations and reasons to be wary of independence for Iraq’s Kurds.

“Clearly this fight goes beyond oil to an issue of wider autonomy in the broader region,” Bassel Khatoun, chief investment officer for Franklin Templeton Investments in the Middle East, said Tuesday in an interview in Dubai.

The venture that discovered Kirkuk’s oil at the Baba Gurgur well in 1927 involved the predecessors of the European and U.S. companies that would become global majors, as well as Calouste Gulbenkian, the Armenian entrepreneur who played a starring role in the birth of the Middle East’s oil industry.

Gulbenkian, known as Mr. Five Percent for the stakes he held in oil projects across the Persian Gulf, was born in the Ottoman Empire, which stretched across modern Turkey and into present-day Iraq. The collapse of that empire during the First World War left behind a patchwork of nations across the Middle East, stitching together diverse ethnic and religious groups that have so often clashed.

For questions related to information in this article, please contact the authors directly.