Exelon Corp., the biggest U.S. nuclear operator, is investing in the batteries of the future.

The company is a lead backer of Volta Energy Technologies, a startup that plans to evaluate and test new energy-storage technologies. Albemarle Corp., the Charlotte-based lithium supplier, is also a lead investor in Volta.

Power companies are increasingly focused on energy storage, spurred in part by regulators demanding that the technology be added to the grid. American Electric Power Co. is adding an energy-storage system at two hydroelectric dams and invested in a U.S. storage developer. Duke Energy Corp., meanwhile, is installing batteries as it trims coal capacity. Exelon is focused on battery and energy-management systems to shape “the utility of the future,” according to Chief Executive Officer Chris Crane.

“We call it ‘life beyond lithium-ion,’” he said in an interview.

Volta’s business is to find and evaluate promising new storage technologies, and has an agreement to test them at the U.S. Energy Department’s Argonne National Laboratory.

The goal is to reduce “the likelihood of a blind alley or a technology that won’t bear out,” said Paul Kearns, Argonne’s director.

“The innovation landscape — the pipeline of innovations — is dense with opportunity and ideas and, as a result, chaotic,” said Volta CEO Jeff Chamberlain, a former chemist who last worked at Argonne. “We will help investors and end-users cut through the noise.”

The startup’s investors are corporate strategic investors who also plan to use the technologies, though Volta may also act as a venture investor. Chamberlain declined to specify the size of Exelon’s and Albemarle’s investments in Volta. 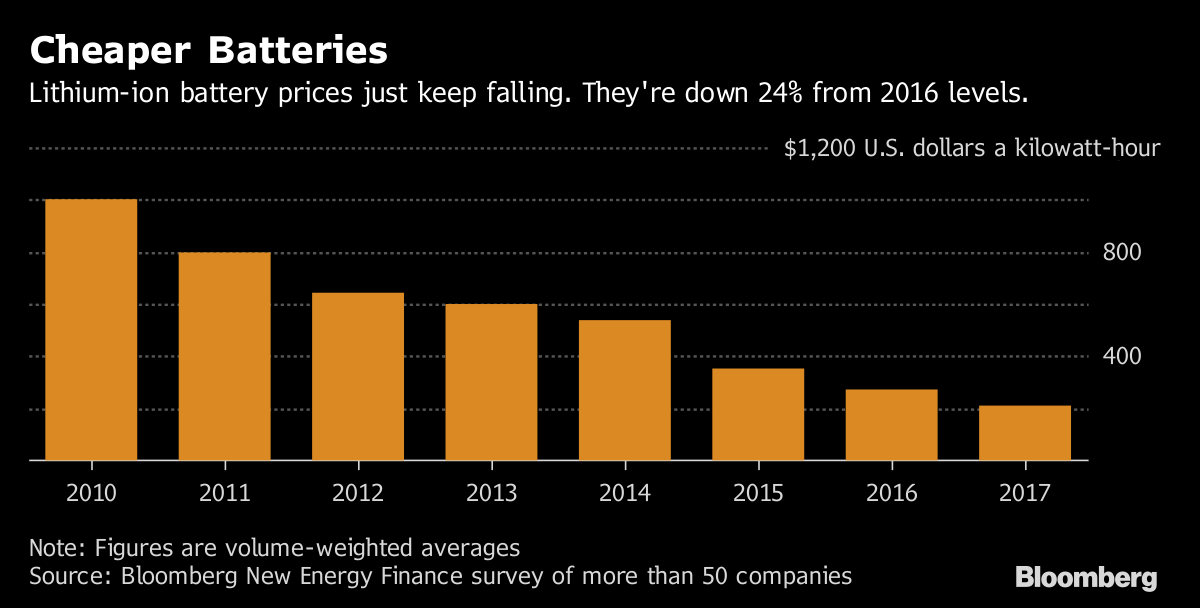 The emergence of Volta coincides with a sharp decline in prices for lithium-ion battery packs — the units that power electric vehicles. They are selling at an average of $209 per kilowatt-hour, down 24 percent from a year ago and about a fifth of what it was in 2010, according to Bloomberg New Energy Finance.

The competition today among existing battery manufacturers largely involves price, said Yayoi Sekine, a New York-based analyst at Bloomberg New Energy Finance. “But if you want to be in the game in the long-run, it is about the next technology — and who can advance it fastest.”