Singapore, London and New York, May 9, 2019 – Recent years have seen rapid growth in the global market for LNG, with volumes of exports and imports up 10% in 2018 alone. This expansion is set to continue apace in the years ahead, according to a new forecast from research firm BloombergNEF (BNEF).

However, growth rates of LNG exports and imports are seen moving out of sync in 2019-2023, with exports increasing faster than imports in 2019 – putting downward pressure on prices unless unusual temperatures in import markets lift demand – and then imports outstripping exports in 2022-2023.

BNEF’s Global LNG Outlook 2019-2023 sees LNG supply jumping by 33 million metric tons per year in 2019, reaching a record 358MMtpa[1], with the U.S. Gulf Coast, Australia and Russia commissioning or expanding export facilities. Meanwhile, ‘structural’ LNG demand, or weather-neutral demand at current LNG prices, is expected to rise by 17MMtpa this year, thanks to additional purchases for power generation and heating in Europe and Asia.

Ashish Sethia, head of commodities at BNEF, commented: “This year’s expected excess supply of 16MMtpa will be hard for the market to absorb, unless we get a dose of ‘wild demand’ for either a hotter summer or colder winter in North Asia or Europe. If not, pressure will be on LNG prices.”

The prospect of short-term oversupply is not deterring investors. A further seven multibillion-dollar LNG export projects, including three in Louisiana in the U.S. and two in Mozambique, are close to a final investment decision and are likely to put extra supply into world markets post-2023.

Maggie Kuang, head of LNG analysis at BNEF and  lead author of the forecast, said: “We expect the market to become tight again from 2022 onwards, with demand rising due to higher penetration of gas in China’s inner provinces and growth of LNG bunkering in inland waterways, and as Thailand and Pakistan become important engines of LNG demand growth.”

That period could also prove to be testing for Europe’s power and heating sectors. John Twomey, head of European gas analysis at BNEF, said: “Europe will become increasingly import-dependent for its gas over the next few years. The LNG market is forecast to tighten by 2023, and European prices will need to be high enough to compete with those of fast-growing markets in Asia and to attract LNG imports.”

The jump in LNG demand last year, totalling nearly 30MMtpa, reflected a 41% surge in purchasing of the commodity by China, and other significant percentage increases in imports in South Korea, India, Pakistan, and Europe. One of the few countries to see a big percentage reduction in demand was Egypt.

On the supply side, 2018 saw the start of production at three LNG ‘trains’, or liquefaction and export facilities, in Australia, at two more in Russia and three in the U.S. The world’s largest LNG producer, Qatar, increased production only marginally.

One important symbolic change for LNG is the gradual shift away from using crude oil as the price benchmark for contracts, to using a gas index, underlining the way the market for LNG has matured as an alternative to coal for electricity generation and for industrial, business and residential heating. New projects from the U.S. are pushing the mix toward gas-indexation, the BNEF report says. 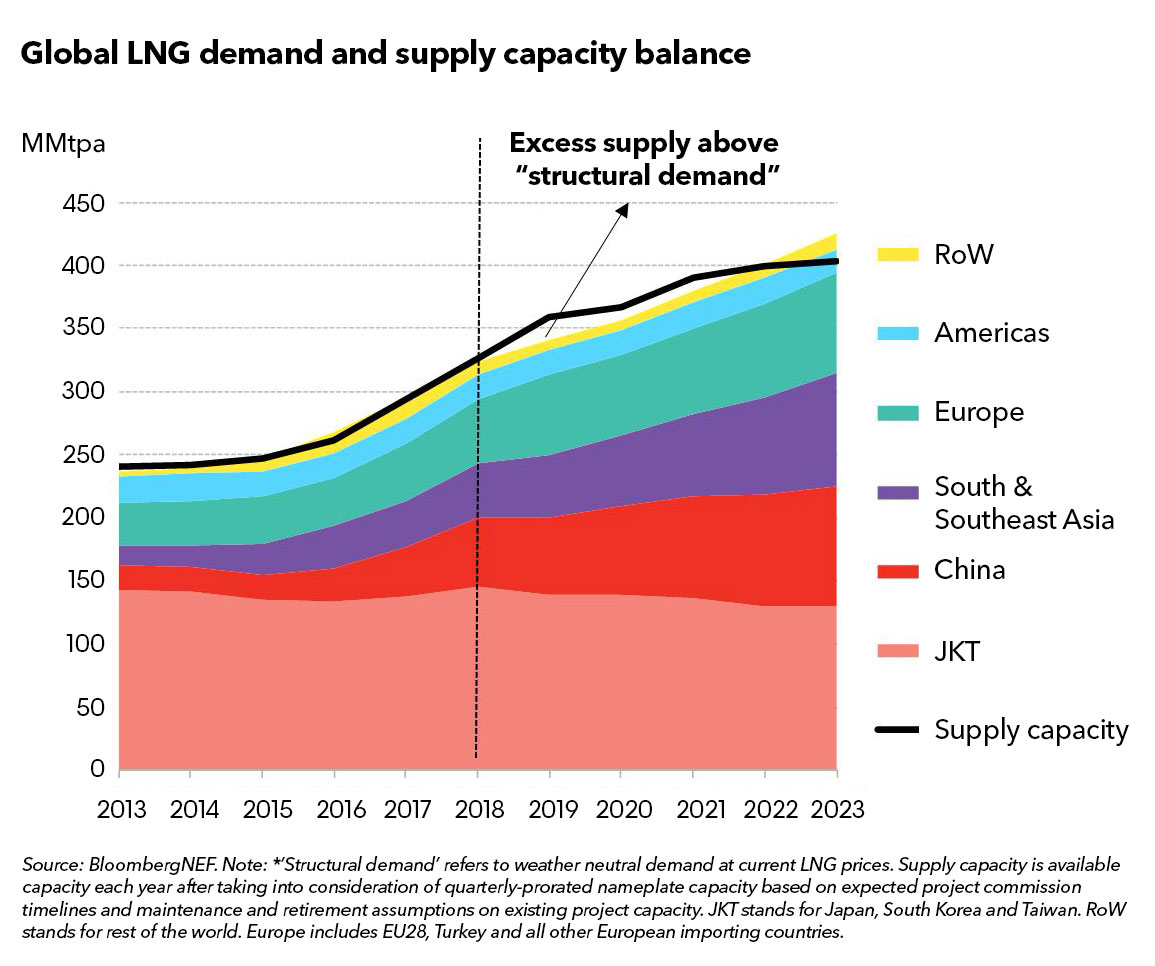