Every year, BloombergNEF’s advanced transport team builds a bottom-up analysis of the cost of purchasing an electric vehicle and compares it to the cost of a combustion-engine vehicle of the same size. The crossover point — when electric vehicles become cheaper than their combustion-engine equivalents — will be a crucial moment for the EV market. All things being equal, upfront price parity makes a buyer’s decision to buy an EV a matter of taste, style or preference — but not, for much longer, a matter of cost.

The crossover point, per the latest analysis, is now 2022 for large vehicles in the European Union. For that, we can thank the incredible shrinking electric vehicle battery, which isn’t so much shrinking in size as it is shrinking — dramatically — in cost.

Analysts have for several years been using a sort of shorthand for describing an electric vehicle battery: half the car’s total cost. That figure, and that shorthand, has changed in just a few years. For a midsize U.S. car in 2015, the battery made up more than 57 percent of the total cost. This year, it’s 33 percent. By 2025, the battery will be only 20 percent of total vehicle cost. 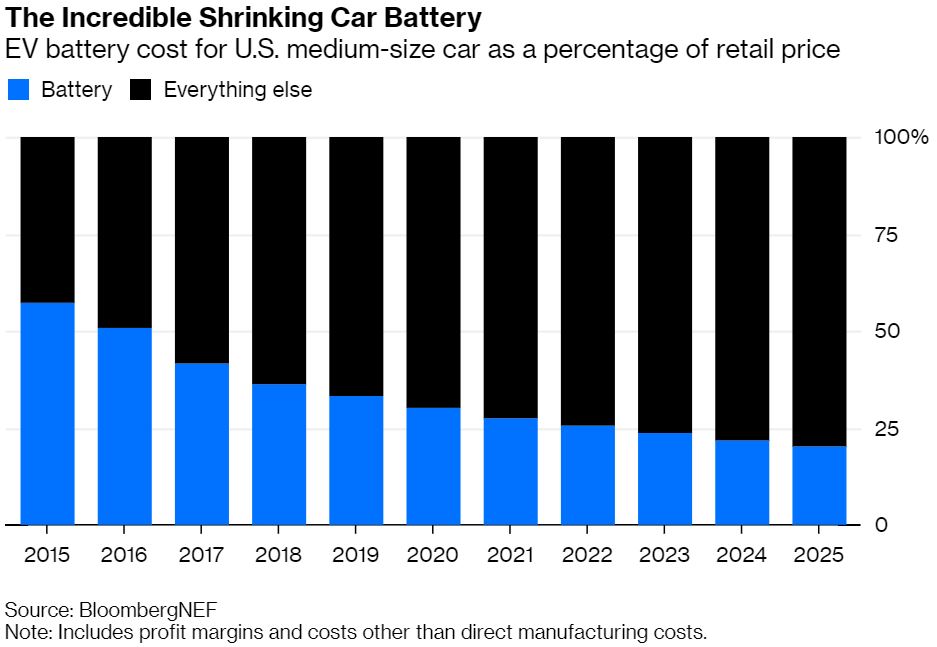 My colleague Nikolas Soulopoulos, author of the research note, provided further insights. The first is that he expects electric vehicle chassis and body costs to drop slightly, while those same costs will rise modestly for combustion vehicles “as a result of light-weighting and other measures to help comply with emissions targets.”

Second, Soulopoulos expects bigger cost improvements in the electric powertrain, as “large-volume manufacturing is only now beginning for such parts.” By 2030, costs for motors, inverters and power electronics could be 25 to 30 percent lower than they are today.

The incredible shrinking electric vehicle battery doesn’t just mean cheaper electric passenger cars. It also means all sorts of other vehicles that weren’t previously practical to electrify now are — and beyond proof-of-concept scale, too.

One example: Komatsu Ltd. has just announced a small all-electric excavator. The company’s rationale is worth reading:

Equipped with an in-house developed new charger, high-voltage converter and other devices, it offers excavation performance on par with the internal combustion model of the same power output, while achieving zero exhaust gas emissions and a dynamic reduction in noise levels. It is an environment and people-friendly machine. Komatsu expects a wider range of applications for this machine, including construction work near hospitals or schools or in residential areas, where contractors have conventionally paid special attention to exhaust gas and noise during work, as well as inside tunnels or buildings.

Smaller EV batteries will soon be flying, too. Harbour Air Ltd., which operates 42 planes in 12 short routes in British Columbia, is adding an electric plane to its fleet. “The intent is to eventually convert the entire fleet,” says founder and CEO Greg McDougall, who offers a familiar rationale for his optimism: Ranges and capabilities “are changing very rapidly with the development of the battery technology.”

McDougall’s company is seeking approval for his plans ahead of today’s battery economics in anticipation of what’s coming. “We don’t want to be trying to get through the regulatory process after it becomes more economically viable; we want to do it now,” he says.