Bullard: Utilities Accept the New, But Will They Embrace It?

Texas power generator Luminant announced that it will close two coal-fired power plants in early 2018. The week before, it said it would close another coal plant that is more than 40 years old — an announcement that came days before the clearly telegraphed effort to roll back the Clean Power Plan. The three plants join the ranks of more than 200 plants that have closed in the past decade due to age, a losing battle against low-cost natural gas and renewable energy, low or negative demand growth, and pollution regulations. The news indicates that long-term economics, not short-term politics, are shaping today’s power mix.

Utility companies, it seems, are just not that into coal anymore — or they don’t see it as a source of growth. Using the Bloomberg Document Search, I combed through investor presentations by 127 publicly listed U.S. utility companies since 2009 and discovered that four particular terms or keywords — “new technology,” “distributed energy,” “power/energy storage” and “batteries,” and “innovation” — are being mentioned with increasing frequency, indicating that companies view these new technologies and concepts as either areas for growth or material threats to their success.

“New technology” made a big appearance in public filings by utility companies in 2010, then reached a new high in 2014. This year to date, “new technology” has been mentioned more than ever before. 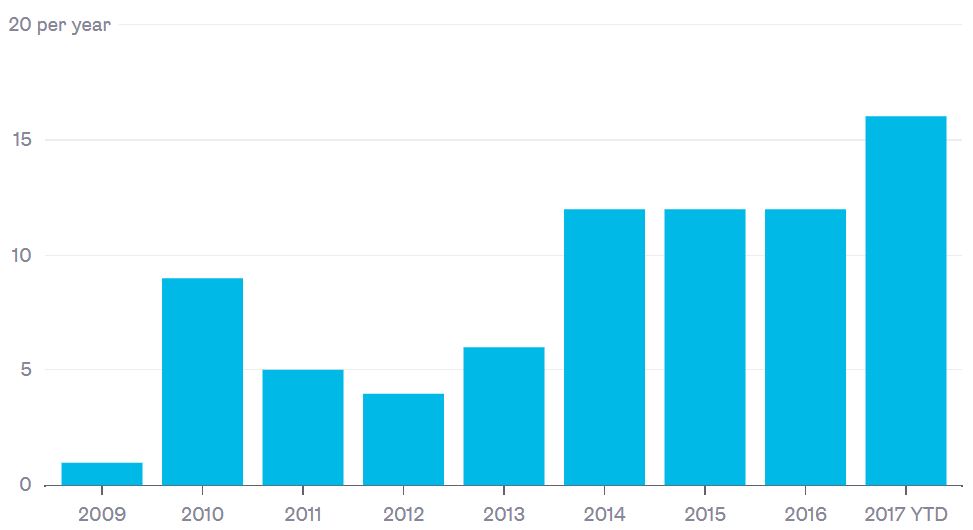 “Distributed energy” — which includes photovoltaic solar as well as wind power and applications such as fuel cells or batteries — shows a similar pattern. The term hit an early peak in mentions in 2011, dipped until 2014, and has already reached an all-time high this year. 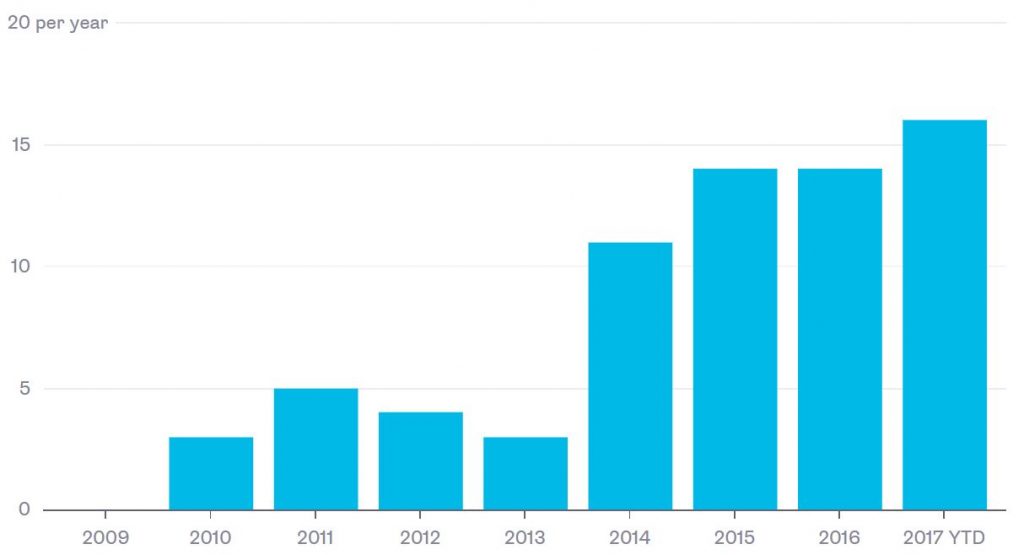 The assortment of words for power and energy storage repeat the pattern: a 2010 peak followed by a trough, and a much higher new peak in 2016 (though its 2017 mentions aren’t yet as high). “Energy/power storage” was mentioned at a significantly higher rate (26 last year) than “distributed energy” or “new technology/new technologies.” 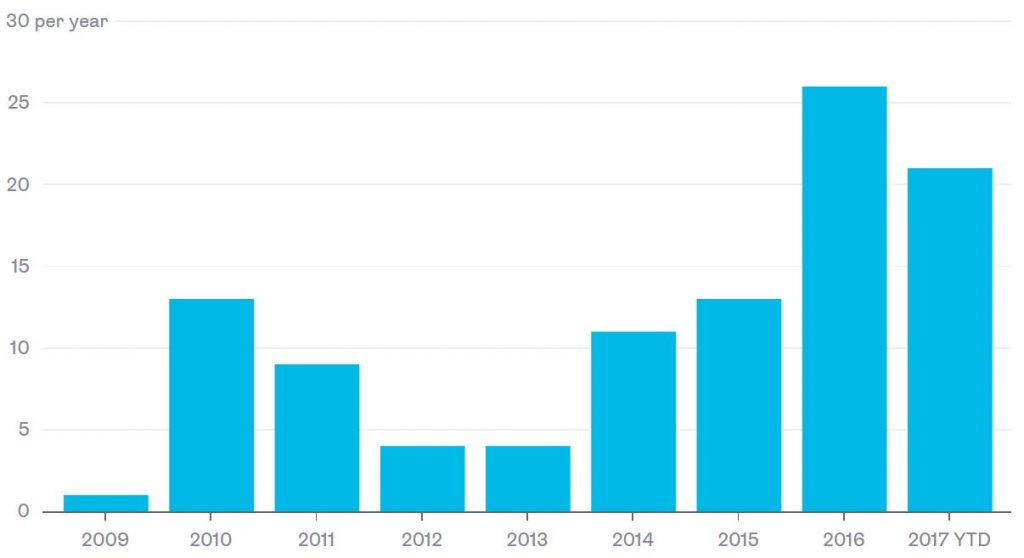 Finally, there is “innovation”: a conveniently vague term that has reached all-time-high mentions so far this year. Again, 2011 was an early peak for mentions that didn’t recover to that level again until 2015.

An All-Time High – Mentions of “innovation” in public filings 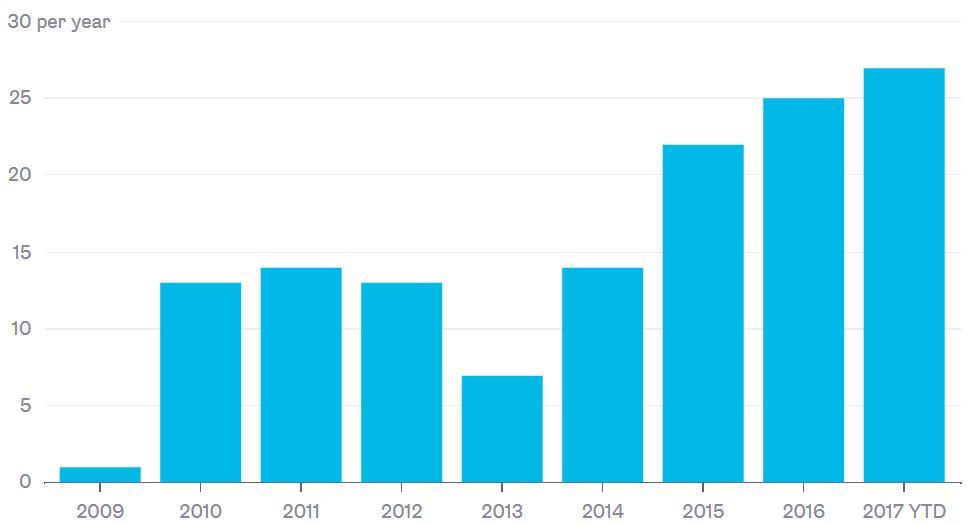 There are two key takeaways from these data series.

The first is that, in the early years of the Barack Obama administration, power companies were clearly making a case for pursuing new technologies and new businesses. Thanks to supportive policies for wind and solar energy and a loan guarantee program to fund the deployment of new technologies, the sector enjoyed a technological tailwind. NRG Energy’s November 2009 investor presentation is a useful example.

That spirit, though, collapsed in following years — and that can be attributed to Solyndra’s implosion in September 2011 and a significant decline in the stock prices of publicly listed clean-energy darlings such as First Solar. The taxpayer-funded solar company’s abrupt fall cast a political pall over the government’s loan guarantee program while casting an equally dark cloud over institutional interest in radically different technologies. It took some time for the ideas mentioned above to recover, and in the case of distributed energy and energy/power storage, economics and consumer desires are bigger drivers than policy.

The second takeaway is a note of caution for the concepts of distributed generation, energy and power storage, new technology, and innovation: It’s not clear that utility companies will naturally own any of those potential areas of growth. Utilities might own assets, but they do not own innovation. Even if innovation in business models is possible, innovation in parts of the value chain (hardware, software, finance) isn’t in the industry’s scope. Where those innovations occur, utilities might be a channel for delivery; they almost certainly wouldn’t be their owner.

An interesting note: In searching through these investor presentations, the total mentions of “research and development” or “R&D” was six. Not six companies, or six in any year: six, total, in almost nine years.