California’s battle against climate change is being fought more fiercely in fast food restaurants than in Tesla Inc.’s car factory in Fremont.

Seven years after the Golden State began offering credits to producers of low-carbon fuels, cities and companies across California are using diesel brewed from fats and oils to fuel everything from fire trucks to United Parcel Service Inc. delivery vehicles. Now, the value of the credits exceed those from electric vehicles fourfold and are second only to ethanol.

The company that’s benefited most from California’s embrace of renewable diesel is based 6,000 miles away in Helsinki. Neste Oyj started sending tankers of the fuel from its refineries in Singapore and Europe around 2012. It’s now the biggest supplier, according to Ezra Finkin, policy director at the Diesel Technology Forum, a Frederick, Maryland-based advocacy group.

The market “is definitely growing,” Dayne Delahoussaye, Neste’s head of North American public affairs, said in a phone interview from Houston. “Renewable diesel has become very popular with the refining community as a good tool to meet obligations.” 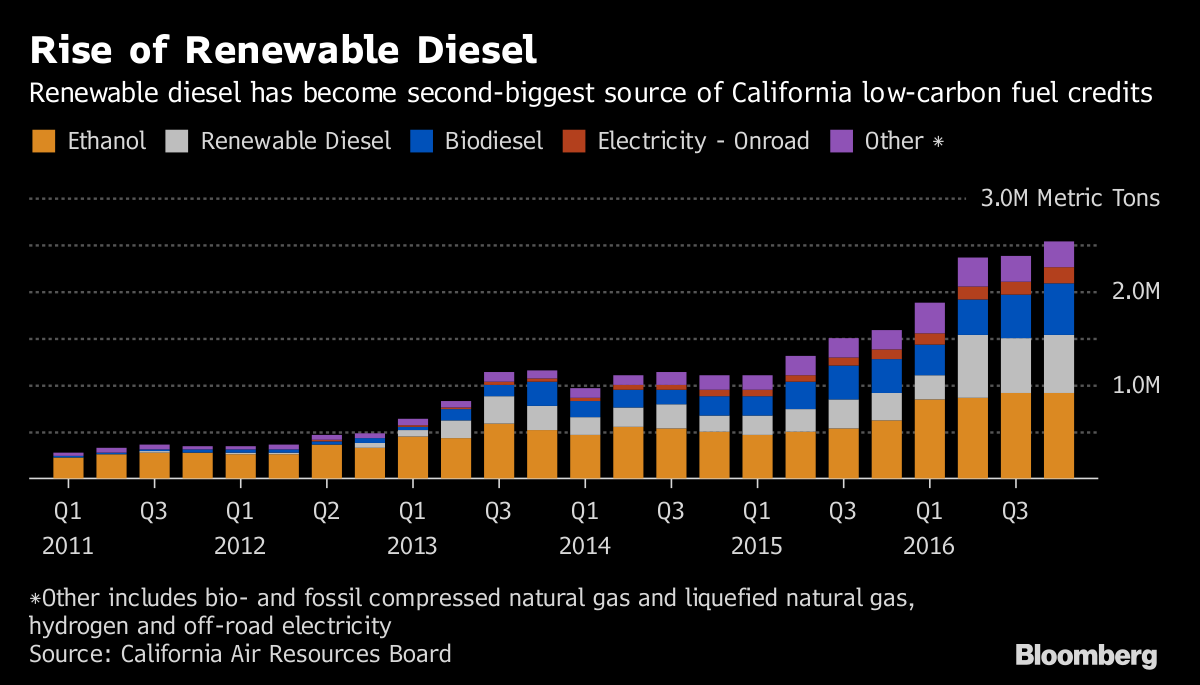 Renewable diesel generated almost 628,000 metric tons of credits in the fourth quarter of last year, up from about 6,000 in 2011, state data show. The credits, which sold at a six-month high of $91.74 per metric ton in early October, are poised to surge as the state accelerates its carbon cuts to meet its goal of reducing emissions to 30-year-old levels by decade’s end. The price will more than double to $215 by 2019, Irvine, California-based Stillwater Associates LLC said in a June report.

Refiners and other purchasers of the credits have paid almost $650 million for them over the past year, costs that are passed onto consumers at the pump.

The credits will add 15 to 20 cents a gallon to the cost of fuel over the next two years, Leigh Noda, senior associate at Stillwater Associates, said in a phone interview. “Ultimately, these programs are designed to subsidize the price of the biofuel suppliers.”

Renewable diesel is made from organic materials such as plants and animal fat that are processed in special refineries. Unlike biodiesel, renewable diesel can be used without blending because of its similarity to petroleum diesel. Biodiesel can typically compose only a fifth of the blended fuel without harming engines.

In recent years, cities such as San Francisco, Oakland, and San Diego, as well as Sacramento County, have transitioned to using renewable diesel to power buses, fire engines and other city vehicles. Alphabet Inc.’s shuttle buses in Silicon Valley also burn it, and UPS said two years ago that it would buy 46 million gallons of the fuel to run its fleet of delivery trucks.

California represents more than half of the U.S. market for the biofuel, Diesel Technology Forum’s Finkin said. The state’s appeal for biofuel producers is built on its Low-Carbon Fuel Standard program, which was first implemented in 2011 with the aim of reducing the carbon intensity of California transportation fuels by 2020 to least 10 percent below 2010 levels.

The program allows oil refiners to buy credits from producers of low-carbon fuels, such as biofuel manufacturers, to offset the carbon intensity of the motor fuels they make.

When the program began, ethanol accounted for almost 80 percent of credits generated, compared with about half by the end of last year, state data show. Renewable diesel was the second-biggest generator of credits, followed by biodiesel, compressed natural gas and electricity for powering vehicles.

A court ruling in 2013 effectively froze carbon reductions for two years until changes were made in how the program was implemented. That means that half the cuts will come in 2018 and 2019. For the first time in the program’s history, the number of banked credits fell in the first quarter, as demand measured by credits needed exceeded supplies generated.

Neste sells about 30 percent of its renewable diesel volumes in North America versus 70 percent in Europe, Juha-Pekka Kekalainen, the company’s vice president of investor relations, said in an email.

The cost of producing renewable diesel, not including the expense of feedstocks such as oils and fats, is about $110 a ton, down from $200 a ton a “few years” back, Kekalainen said.