Carbon From L.A. to Paris Jumps as Lawmakers Plan Tightening

Carbon prices from California to New Zealand are soaring as lawmakers across the globe seek more stringent rules for their greenhouse-gas markets.

California emission permits surged to a four-year high this week after Governor Jerry Brown published a plan to extend the biggest U.S. carbon trading program. In Europe, allowances reached their highest level since March as politicians debate proposals to cut a permit glut, while New Zealand carbon contracts rose before a review of its system. 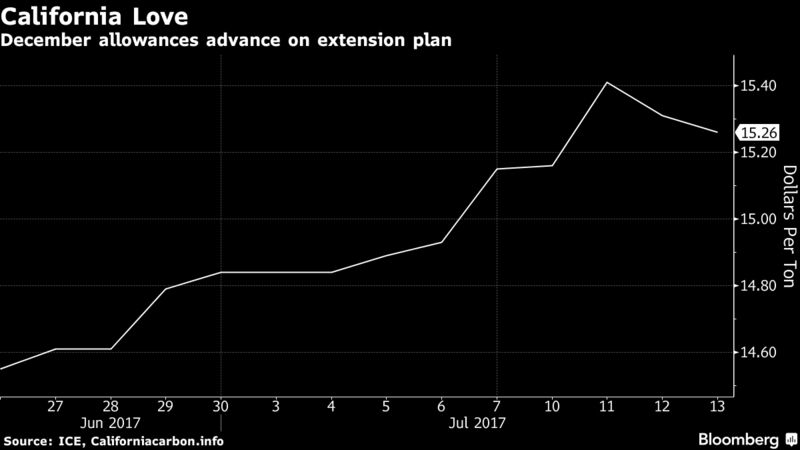 Most countries are looking for the most cost-effective way to switch from the fossil fuels blamed for climate change. Even in the U.S., President Donald Trump’s decision last month to pull out of the landmark Paris accord on cutting emissions triggered widespread condemnation by civic and state leaders across the country including from the governors of New York and Massachusetts.

China is planning to install the world’s largest carbon market this year, though it’s seen phasing in industries over time to smooth the impact on the economy. The biggest energy consumer burned the least coal in six years in 2016, became the number one producer of renewable energy and even lowered its emissions of climate-warming gases, BP Plc data show.

“There seems to be a clearer political will to lift carbon prices,” said Ingo Ramming, the London-based co-head of commodity solutions for Commerzbank AG. “Even if China’s national carbon market takes longer to install than expected, globally there’s a lot happening, especially among the North American states and provinces.”

In carbon trading, governments set a limit on emissions and then auction off or give away rights to pollute within the cap. These permits can be sold by more efficient companies to those that are less efficient. As governments periodically lower the caps, overall emissions fall.

California’s proposed legislation is designed to extend the basic current structure of its cap-and-trade program through 2030. Governor Brown, 79, emphasized early this week that his plan would not only help limit global warming, but “protect vulnerable communities from industrial poisons.”

On Thursday, he urged lawmakers to extend the program to show the world how to lower the risks of mass migration, fires and disease. “This isn’t for me. I’m going to be dead. It’s for you. And it’s damned real. So I just ask you; take it seriously.”

California’s December allowances closed at a peak of $15.41 a metric ton this week, the highest since January 2013 when the program started, according to data from exchange ICE Futures.

“They’ve never been this high, except for the very beginning of the market,” said Lenny Hochschild, managing director at Evolution Markets Inc., the White Plains, New York-based environmental broker. 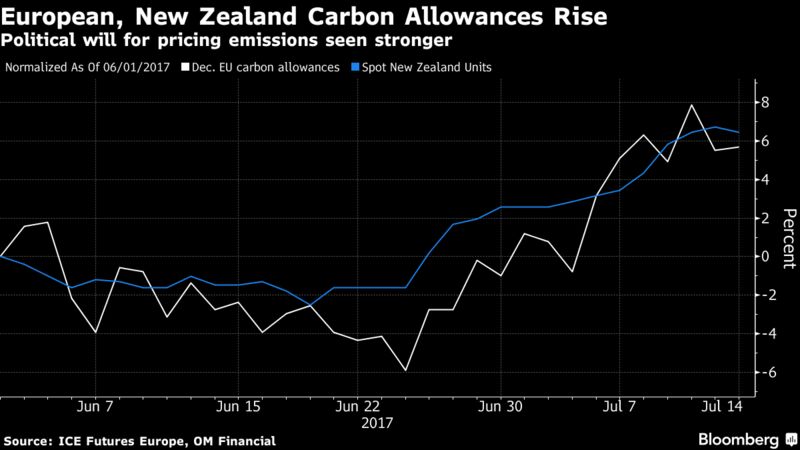 In Europe, lawmakers are currently debating proposals to control the supply of emission allowances as a way to boost prices in its 12-year-old carbon market. Per Lekander, a fund manager at Lansdowne Partners U.K. LLP in London, reckons permit values will double within a year if the plans are approved.

“Finally, after 10 years of oversupply, this mechanism is now about to deliver what was intended,” Lekander said.

European Union efforts to reform its $48 billion cap-and-trade system have repeatedly failed to increase the penalty for polluting, with the price of emissions slumping more than 80 percent since 2008 because of the glut. Futures fell 0.8 percent to 5.32 euros ($6.07) a ton on ICE Futures Europe on Friday.

The latest steps to overhaul the market looked “promising” after legislators met on Monday, said Siim Kiisler, the environment minister of Estonia, current holder of the European Union’s rotating presidency. Lawmakers meet again on the market changes in September.

The Group of 20 nations published its first-ever climate and energy action plan at the weekend. The U.S. was the only member that didn’t agree that the Paris accord was “irreversible.”

“It’s good to see the countries taking a stand against the regressive climate policies of President Trump,” said Trevor Sikorski, head of carbon and natural gas at Energy Aspects Ltd. in London.