Centrica Plc slumped to its lowest level since 2003 as the U.K. government plans to publish a draft law as early as next week to cap household energy prices.

Shares in the U.K.’s biggest power and gas supplier to homes fell as much as 7.4 percent and SSE Plc dropped as much as 5 percent. Theresa May on Wednesday followed through on an election promise to cap charges in what she called U.K.’s “broken” energy market as she addressed delegates at the Conservative Party’s annual conference in Manchester, England.

The government will “bring an end to rip-off energy prices,” May said. “We will always take on monopolies and vested interests when they are holding people back.”

The government and the nation’s biggest utilities have come under increasing pressure from the Labour Party, other lawmakers and consumer groups to revamp how the retail market works and to curb prices for the most vulnerable consumers. Centrica is the utility that would see the biggest earnings impact from any new price regulation, Goldman Sachs Group Inc. said before the general election in June.

Details of the plan circulated by May’s office after her speech suggested the measure is softer than her words suggested. The law will give Ofgem the powers to set the cap, and the measure can only be temporary, according to the briefing. That means the power will be in the hands of the independent regulator, rather then ministers who might deploy it for political purposes. The planned law will cover all standard variable tariffs.

The U.K. market, dominated by six suppliers, is broken because it punishes loyal customers with higher prices and the most loyal customers are often those with lower incomes, the elderly, people with lower qualifications and people who rent their homes, she said in her speech.

Centrica declined to immediately comment on May’s plan. SSE will “look carefully” at the proposals, co. says in an emailed statement. The utility “believes in competition not caps.” 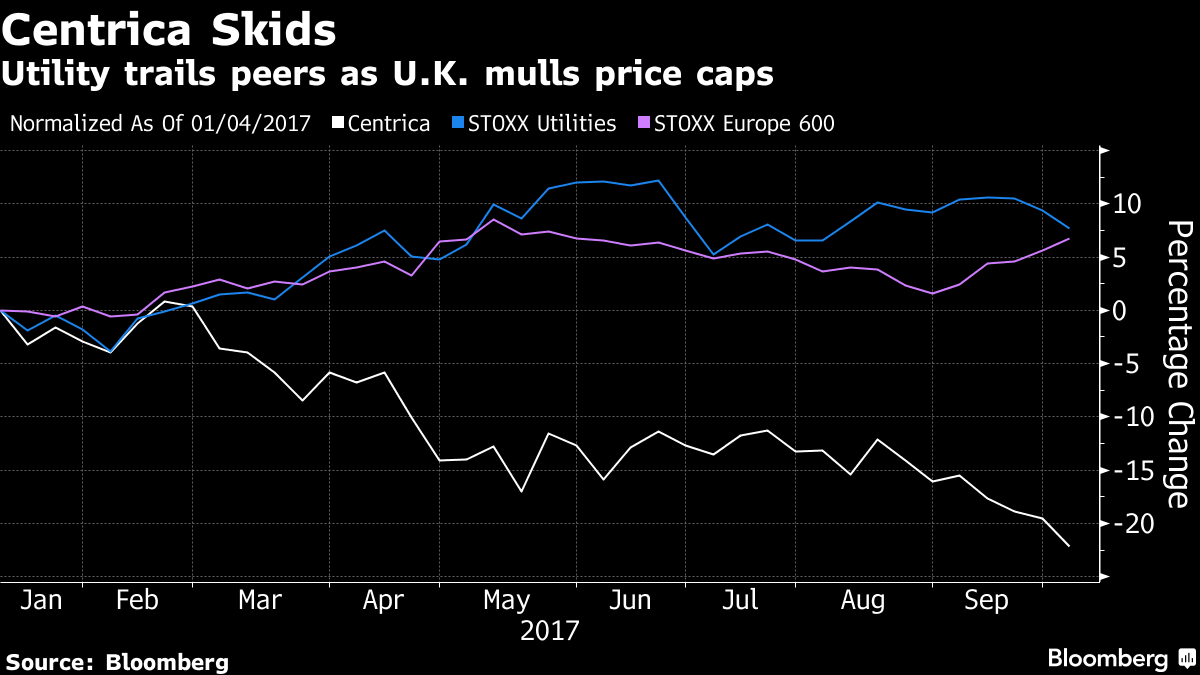 The stock, “is getting hit again and again for the same thing,” said Deepa Venkateswaran, an analyst in London at Sanford C. Bernstein & Co.

May and her government had mooted price caps in the run up to the election in a bid to show low-income voters that she’s on their side. The action followed through on the manifesto pledge — copied from a similar policy first proposed by Labour — to rein in the so-called Big Six utilities. Last year, the Competition and Markets Authority said consumers were overpaying on their bills by 1.4 billion pounds ($1.9 billion) a year by remaining on default fares instead of changing suppliers.

“We share the Government’s concern that the market is not working for all consumers, especially the vulnerable, and will work with the Government on their plans announced today to better protect consumers on poor value deals,” Ofgem said in a statement.

Centrica’s trading volume was 7.1 times the 20-day average for this time of day.

“I would buy it. It’s getting extremely cheap,” Venkateswaran said about Centrica’s stock. With big investments needed to boost uptake of electric vehicles and smart meters “it’s not in the interest of the government to bankrupt the suppliers.”