China Is About to Bury Elon Musk in Batteries

As Elon Musk races to finish building the world’s biggest battery factory in the Nevada desert, China is poised to leave him in the dust.

Chinese companies have plans for additional factories with the capacity to pump out more than 120 gigawatt-hours a year by 2021, according to a report published this week by Bloomberg Intelligence. That’s enough to supply batteries for around 1.5 million Tesla Model S vehicles or 13.7 million Toyota Prius Plug-in Hybrids per year, according to Bloomberg New Energy Finance.

By comparison, when completed in 2018, Tesla Inc.’s Gigafactory will crank out up to 35 gigawatt-hours of battery cells annually. 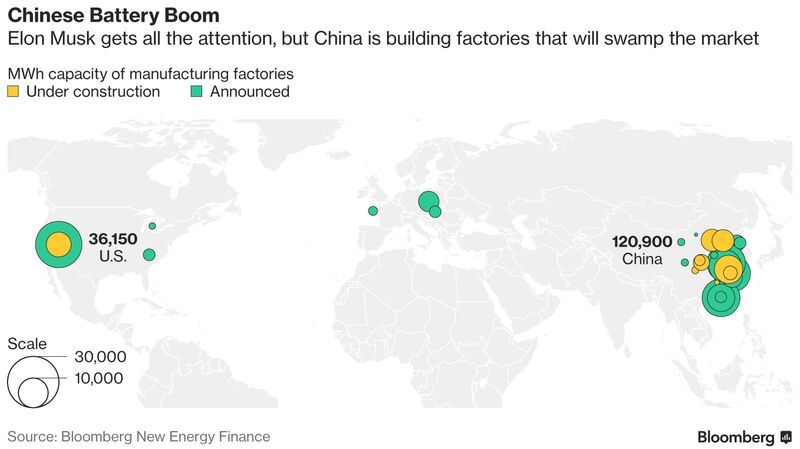 Lithium-ion batteries have long been used in smartphones, laptops, and other personal electronics, but demand is forecast to explode in the next five years as electric vehicles proliferate and power companies install giant storage systems to smooth the ebb and flow of wind and solar.

While Tesla may be building the biggest and splashiest factory, the Chinese government has launched a sweeping effort to increase the country’s dominant market share.

Roughly 55 percent of global lithium-ion battery production is already based in China, compared with 10 percent in the U.S. By 2021, China’s share is forecast to grow to 65 percent, according to Bloomberg New Energy Finance.

“This is about industrial policy. The Chinese government sees lithium-ion batteries as a hugely important industry in the 2020s and beyond,” Bloomberg New Energy Finance analyst Colin McKerracher said.

In all, global battery-making capacity is forecast to more than double by 2021 to 273 gigawatt-hours, up from about 103 gigawatt-hours today. That’s a huge opportunity, and China doesn’t want to miss it. 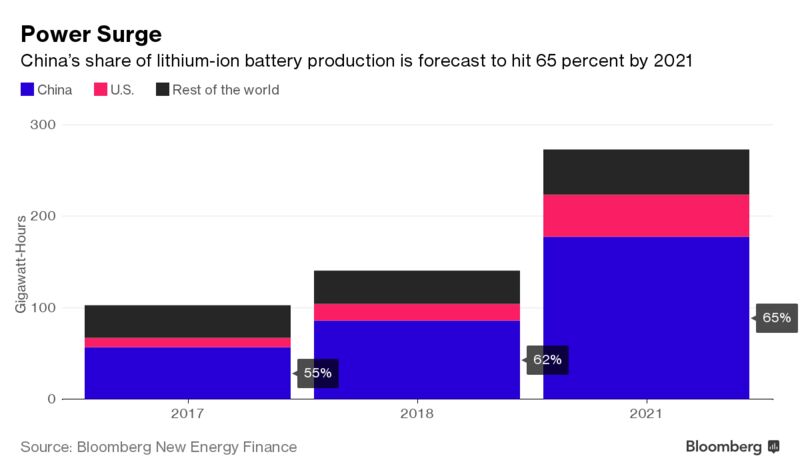 But don’t count Tesla out. The company, based in Palo Alto, California, plans to announce locations for up to four new factories by the end of 2017. (It’s exploring at least one site in Shanghai.) And there are few, if any, individual Chinese battery companies that can match the scale of Tesla’s production toe to toe.

Yet while China lacks a dominant battery behemoth, it makes up for it with a constellation of smaller players, including Amperex Technology Ltd., Tianjin Lishen Battery Joint-Stock Co. and dozens of others.

Earlier this year, the Chinese government announced plans to consolidate battery manufacturers to help the industry mature. The initiative goes hand in hand with China’s plans to flood highways with five million electric vehicles by 2020. 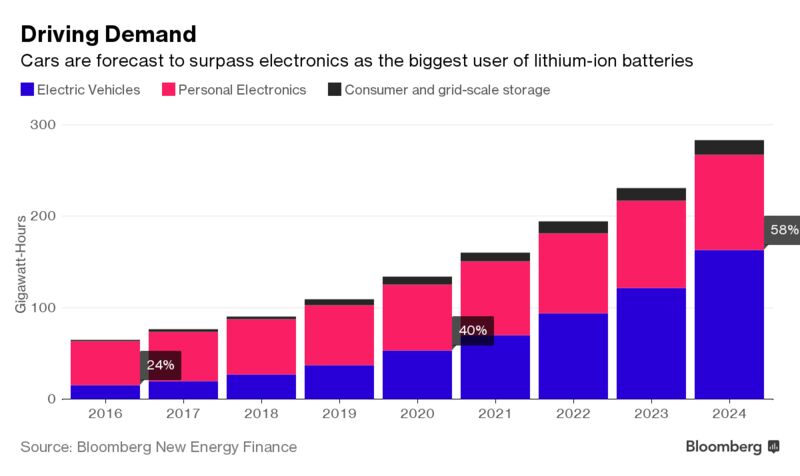 “The Chinese government wants to encourage the creation of a domestic market to create a large enough base and gain a foothold,” Goldie-Scot said. “From there, they can expand and sell globally.”