Coal Isn’t Coming Back, Even With Trump Leaving the Paris Accord

In announcing his withdrawal from the international pact to fight global warming, Trump touted mines opening in Pennsylvania, Ohio and West Virginia and said the Paris accord would’ve been a near extinction-level event for such operations. To be sure, a handful of new mines have surfaced in Appalachia, but they’re primarily the kind used to supply steelmakers, not polluting power plants. And by the end of last year, the nation’s mines still totaled one-seventh of what they were in the 1970s.

Trump also warned the accord would allow India to double coal output and China to boost demand while punishing the U.S. for both. But there’s little desire — because of cheap natural gas, not politics — to use more coal at home. With or without the Paris agreement, market forces are turning a meaningful return of America’s coal production, coal-fired power plants and mining jobs into an insurmountable task.

“Coal plants have closed down and you’re not reopening them,”said Andrew Cosgrove, an energy analyst at Bloomberg Intelligence. “Low natural gas prices, at the end of the day, have decimated most of the U.S. coal production.”

In 2008, the U.S. produced a record 1.2 billion tons of coal and the fossil fuel was burned to generate about half of U.S. electricity. Then came the shale boom, unlocking a flood of cheap and cleaner-burning natural gas. Since then, U.S. power generators have increased their use of gas — and renewables — to the point where gas is now the country’s dominant power-plant fuel. Meanwhile, overall electricity demand has stopped growing as Americans use energy more efficiently.

With the vast majority of America’s coal getting shipped to the country’s shrinking fleet of power plants that burn it, there’s little economic need to increase coal production. By 2016, the U.S. produced 728 million tons of coal. In March, coal generated 28 percent of America’s power, according to the Energy Information Administration. 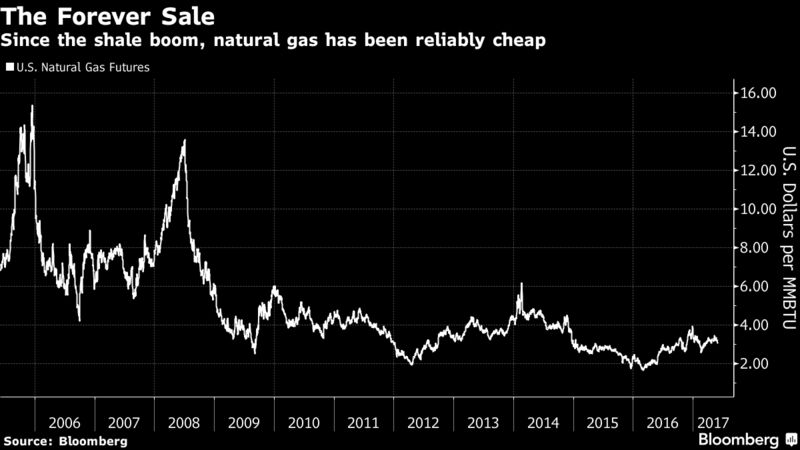 In his speech, Trump lamented the idea of China building “hundreds” of new coal-fired power plants under the Paris pact. “We can’t build the plants, but they can,” he said. In fact, China has set targets to use more natural gas to ease its worsening air pollution, and its consumption of the cleaner-burning fuel is on the rise.

U.S. utilities continue to shutter plenty of aging coal-fired plants, replacing them with new gas-fired ones. There are no new coal-fired power plants currently under construction.

For the Tennessee Valley Authority, economics explain the trend. The government-owned power provider, created by Congress in 1933, has long relied on coal. In recent decades, it hasn’t bought the coal from Appalachia — once home to tens of thousands of coal jobs — but from the Powder River Basin of Wyoming and Montana. Out West, the giant, open-pit mines use hulking excavators and require vastly fewer coal workers than in Appalachia.

TVA has plans to retire about half its remaining coal fleet by the end of 2018 — and replacing that electricity with facilities running on gas, nuclear and renewables.

“That really was driven by business math rather than any environmental standards,” Bill Johnson, TVA’s chief executive officer, said Wednesday in an interview at Bloomberg’s headquarters in New York. “We’re on a path that’s best for our customers.”

Indeed, coal companies and investors have benefited from the rolling back of environmental regulations, including one that was designed to protect streams from the effects of mining. U.S. coal production is up from a year ago.

But the new mines that have opened in Appalachia — including in southern West Virginia, the epicenter of the industry’s bust — chiefly produce metallurgical coal, which accounts for a small portion of overall output and is used in the steelmaking process, not power generation. That commodity more than tripled in value after China curtailed its own production and surged again this spring after Tropical Cyclone Debbie hammered Australia’s coast, disrupting global supplies.

“Coal’s being driven by much more important things than the Paris agreement,” Bloomberg Intelligence’s Cosgrove said. 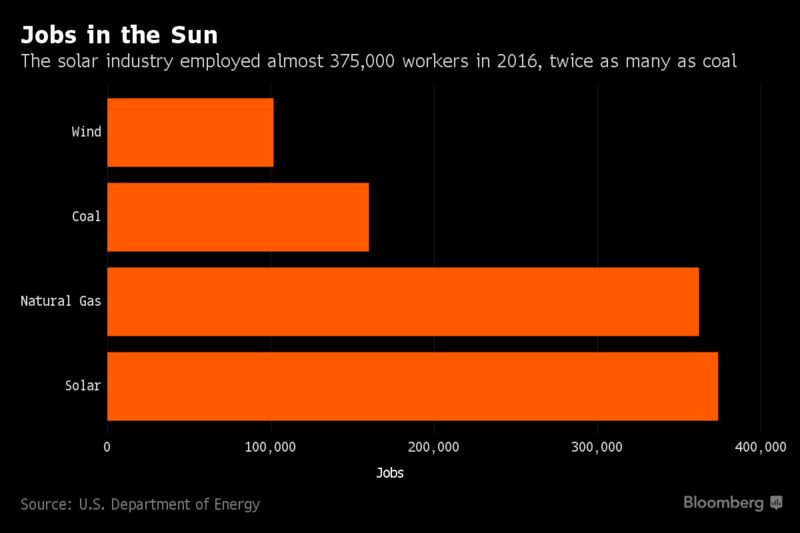 There has, of course, been a boom in energy jobs — in gas, wind and solar. The electric power industry’s transition away from coal has created hundreds of thousands of jobs in renewables, making solar companies the largest employer, with twice as many workers as coal, according to the U.S. Energy Department.

“Unfortunate. Preventable blunder. Contradictory to jobs,” he said in an interview. Citing the growth in solar jobs, he added: “Trying to make a short trade on a long-term trend is risky.”