The 30-foot hull of an experimental mini-sub is helping to show how the U.S. may be able to redeploy the mountain of coal that power plants are no longer burning.

Researchers at the Oak Ridge National Laboratory in Tennessee used carbon fibers to build the submersible for the U.S. Navy with a 3-D printer, demonstrating the promise of new manufacturing techniques that are faster, cheaper and more flexible. But it also offers inspiration to scientists looking to turn America’s vast reserves of coal into advanced materials, including carbon fibers now made using petroleum-based polymers. 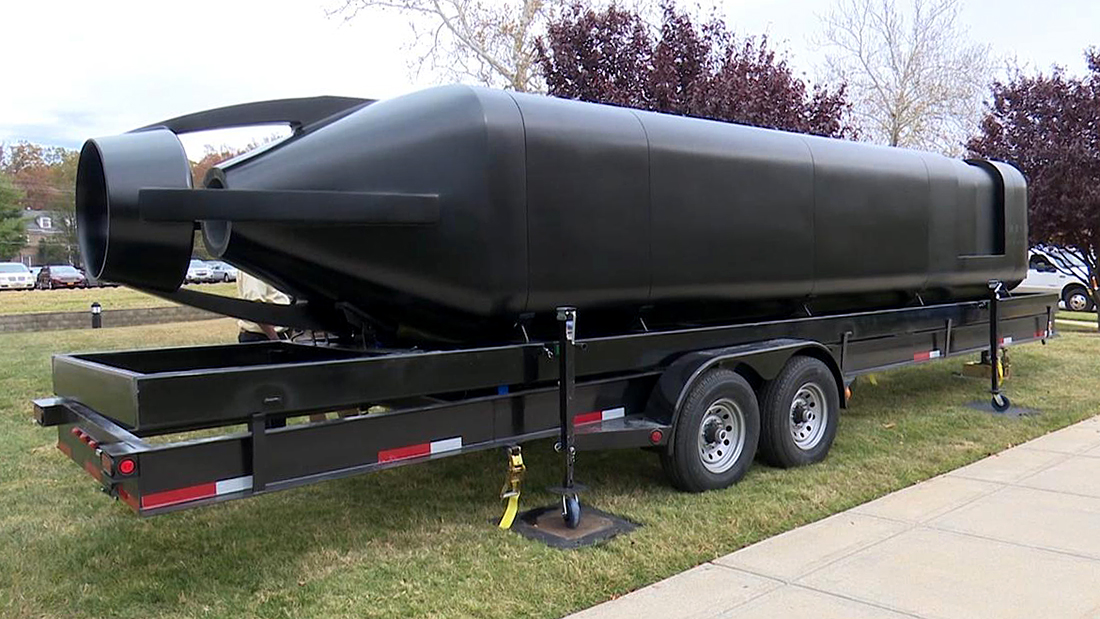 The search for alternative uses has intensified as utilities switch to cleaner options for generating electricity, like natural gas, wind turbines and solar panels. While no one expects the research to revive all the coal-mining jobs that disappeared in recent years, experts say new sources of demand are emerging for the carbon-rich rock, from battery electrodes to car parts.

“Our slogan is ‘No molecule left behind,’” said Edgar Lara-Curzio, who is researching alternative uses for coal at Oak Ridge. “Coal for power generation is going to continue to decrease. Here is a chance for us to pay back all these coal communities that have sacrificed for so many years to give us cheap electricity.” 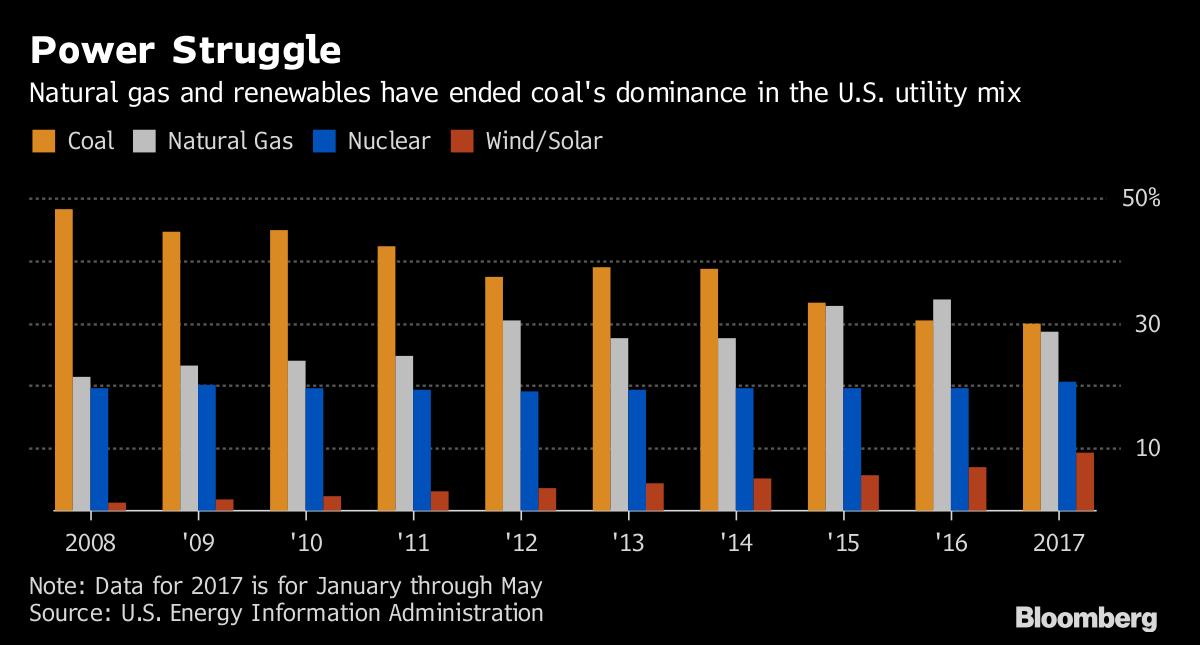 Even after years of decline, the vast majority of America’s coal is still used for electricity generation. However, the fossil fuel accounts for just 30 percent of the power mix today, down from about half a decade ago. Since 2008, U.S. coal production has plunged 40 percent, to 728 million tons last year, according to the Energy Information Administration. With less demand and more industry automation, the number of miners fell 40 percent to about 50,000.

While President Donald Trump keeps vowing to bring back “clean, beautiful coal,” there’s little evidence that demand will ever fully recover. U.S. electricity use has flattened, and power plants have plenty of cleaner and increasingly cheaper fuel options. The one-time hope for a new wave of furnaces using “clean coal” technology has often failed — most recently, Southern Co.’s Kemper plant ditched its plans and now will run on gas instead.

Even so, coal remains an abundant source of carbon in America, with hundreds of billions of tons of it still buried across Appalachia, the Illinois Basin and sweeping plains of Wyoming and Montana.

There’s plenty of precedent for alternative uses to power generation. In World War II, Germany converted its own coal into fuel for tanks, ships and airplanes. During the era of apartheid and white-minority rule in South Africa, Sasol Ltd. commercialized techniques for making fuels and chemicals from coal that are still in use today.

Perhaps the greatest potential for coal now is in carbon fiber already widely used in aircraft and high-cost luxury items, said Eric Eddings, a scientist at the University of Utah in Salt Lake City. The strong, stiff and ultra-lightweight fibers of nearly pure carbon could be used to replace heavier materials including aluminum and steel in a growing range of products.

Currently, most carbon fiber is made from a substance called “polyacrylonitrile,” with a smaller portion coming from petroleum or rayon “pitch.” But Japanese giant Mitsubishi Chemical Holdings Corp. has for decades used coal to create carbon fiber, which is used in everything from satellites to golf clubs.

While Mitsubishi doesn’t disclose its proprietary process, Eddings is trying to replicate the results using Utah coal in hopes of driving down costs, which so far have prevented many manufacturers from using the material. Cheaper carbon fiber could expand demand, allowing for lighter vehicles that need less fuel, or larger, more-efficient wind turbines, he said.

“That’s really the Holy Grail,” Eddings said. “The mass of coal being mined wouldn’t be as high, but if you get more value per ton of coal, then it can still work out.’’

At the Oak Ridge lab, the 3D printing techniques for the carbon-fiber sub hull helped reduce production costs by 90 percent and shortened manufacturing time from months to days, according to the Department of Energy. Improved design and building techniques encourage more use of carbon fibers, which could increasingly come from coal, said Lara-Curzio, the Oak Ridge scientist.

Jeffrey Grossman, a professor at Massachusetts Institute of Technology, is pursuing a different angle in utilizing coal’s properties. His team of researchers processed the rock into tiny strips of film that are highly durable and conduct electricity. The technology wouldn’t require a lot of coal, but the profit margins on high-end products that use it would probably be much higher than using coal as power-plant fuel, he said.

The coal films are so robust that they can carry “huge currents” of power and generate a lot of heat without breaking up, Grossman said. “You can get them up to like 300 Celsius (572 degrees Fahrenheit),” he said. “That is by far much, much better than other kinds of thin-film heaters.’’

Ohio University professor Jason Trembly has a more down-home approach. His flash of inspiration came a few years back while rebuilding his backyard deck. Studying the wood-and-plastic composite he was putting in, he had two thoughts: First, if he could use a coal composite material instead, the deck would probably be more stain-resistant and it’d be easier to recycle the plastic portion down the line. Second, there’s a lot of coal in eastern Ohio looking for customers.

“We have our ideas, other people have their ideas,’’ Trembly said. “You start daisy-chaining these along, and you could be able to sustain a coal industry.’’

In 2011, coal entrepreneur and Ramaco Resources Inc. Chairman Randy Atkins bought some reserves of the fossil fuel in Wyoming’s Powder River Basin. But with fewer and fewer utilities looking to burn the region’s coal, Atkins and his partners in Ramaco Carbon LLC were forced to pivot their strategy.

The company partnered with researchers including Oak Ridge and MIT to develop and market new products from Wyoming’s coal. Atkins’ team is building a research center and industrial facility on the region’s windswept plains — right beside his coal.

“The research, of course, will benefit all,” Atkins said. “And we hope there will be intellectual property created. Coal is too valuable to burn.’’