If you’ve ever driven Tesla’s flagship vehicle—the $140,000 Model S P100D—you’ve experienced an unparalleled version of driving power. Zero to 60 in 2.3 seconds punches you back in the seat while making the stomach turn somersaults. Some people live for that feeling. I’m not one of them.

Sure, driving a fully loaded electric beast is as thrilling as the fiercest roller coaster—but not everyone wants their daily commute to be the Kingda Ka. After taking one of the first drives of Tesla’s new Model 3 last week, I came away thinking that CEO Elon Musk has finally delivered an electric car for the everyday road tripper like me.

The Model 3 still has plenty of pickup, effortlessly jumping from zero to 60 mph in 5.1 seconds in the upgraded version I test drove, which gets a stunning 310 miles on a charge. It’s nimble, comfortable, and has tight steering that’ll keep you grinning. The seats embrace you in a gentle hug that feels a bit more geared for road trip than racetrack. It’s the Model S on a diet, making up in practicality what it loses in extravagance.

And I haven’t even gotten to the good stuff yet.

The fact that this car still looks, drives, and feels like a Tesla—at a starting price of $35,000—shows how far the Silicon Valley automaker has come. It’s still an expensive vehicle for many of Tesla’s biggest fans, and compelling options packages will drag a lot of stretch spenders into uncomfortable territory. But at current battery prices, Tesla is setting a new standard for value in an electric car—which of course was Musk’s plan all along.

The minute you approach the Model 3, you realize you’re in for a new sort of car experience. The auto’s elegant, flush door handles swivel into your palm with the light press of a thumb. The ethereal swoop of metal feels surprisingly solid.

The car doesn’t have a key, or a key fob. Instead it syncs to your phone through a bluetooth connection and will automatically unlock as you approach. The backup in case your phone dies or you need to hand it off to a valet is a thin key card that you can keep in your wallet. Swipe it on the car’s B pillar to unlock it, and place it on the center console to turn the car on.

Stepping inside the cabin, I quickly realized that my assumptions had been all wrong. I’ve seen a lot of spy shots of Model 3 prototypes online, and the interiors always appeared to be flat, spartan, and lifeless. Not so. The lack of gauges on the narrow dash is refreshing. The solid strip of open-pore wood gives the space warmth, and the glass roof makes the the cabin feel like an atrium. The forward field of vision—uninterrupted by knobs, lights, and levers—is expansive.

Tesla is getting better at building cars. Unlike early versions of the Model S and X, the Model 3 is built to be a daily driver, with plenty of cupholders, door pockets, and console storage. The materials of the arm rests and doors feel ready for abuse. And the stitched synthetic material used for the premium seats is different than leather, but not inferior.

BMW and Mercedes should be concerned. This automobile is clearly targeting their market. Since Musk handed over keys to the first 30 cars on Friday, I’ve heard a lot of people trying to compare the Model 3 to GM’s all-electric Chevy Bolt (known as the Opel Ampera-e in Europe). Even though they’re similarly priced and both run on batteries, the parallel ends there. The Bolt is an economy gasoline car that’s been electrified; the Model 3 is—something altogether different.

Tesla aims to sell 500,000 electric cars next year. In order to succeed, it will have to tear down the artificial distinction between a “car buyer” and an “electric-car buyer” and go straight at the heart of the $35,000 sedan class: the BMW 3 Series and the Mercedes-Benz C-Class. The Model 3 is Musk’s missile for this target. 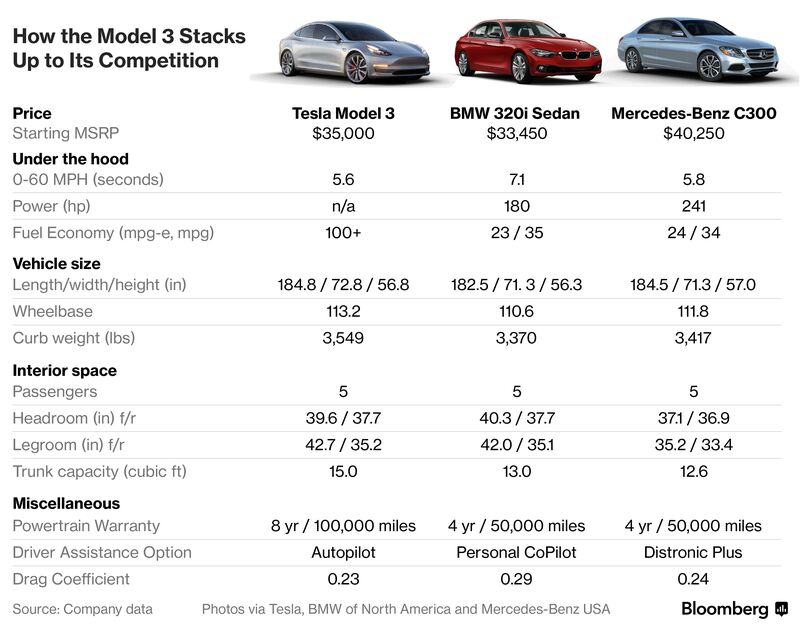 “We finally have a great, affordable, electric car—that’s what this day means,” Musk said as he unveiled the Model 3. “I’m really confident this will be the best car in this price range, hands down. Judge for yourself.”

The Model 3 comes in two battery types: standard and long range. In a break from the past, Tesla wouldn’t disclose the size of its two battery packs. Instead, going forward, the vehicles will be identified by the miles they can drive on a charge, and the cars will lose their exterior badges that indicate battery size and premium performance options.

From the outside, a $35,000 Model 3 will look no different than a $57,000 fully loaded version. The company plans to make the same transition with its Model S and Model X platforms later.

Here’s how the two versions break down:

The bigger battery is a gamechanger. Only one other electric car in the world has broken the 300-mile range barrier: the most expensive version of Tesla’s Model S, an ultra-luxury car that starts at $97,500. The new Model 3 has cheaper range for the money than the current record holder, the $37,500 Bolt, which is outclassed by the Model 3 in virtually every category.

Each year the battle for cheap range gets a little bit more intense. 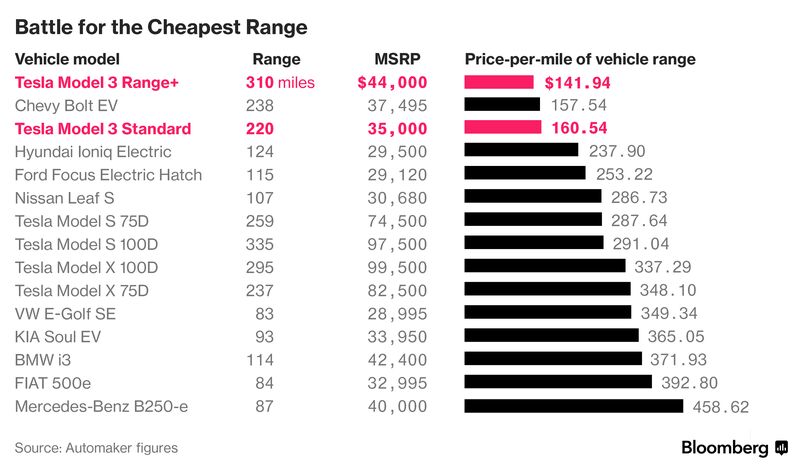 Another indicator of Tesla’s battery and efficiency improvements is its weight. It’s only 150 pounds more than the Mercedes C-Class, even though it’s actually a smidge bigger and has more passenger and trunk space. Five years ago that would have been impossible.

The Model 3 has a lot of room for a car its size, and the space is put to good use. With my legs fully extended in the passenger seat, a six-foot tall man still had room to sit comfortably behind me.

The car has the best storage room in its class—15 cubic feet divided between the front and rear trunks. For anyone hoping to use the Model 3 as their sole means of transportation, the biggest hang-up might be the trunk opening.

I brought a tape measure with me, and the opening measured 18.5 inches tall and 42 inches at its widest. That’s pretty standard for a small sedan, which is to say, not great. Most Americans have grown accustomed to larger SUVs and crossovers, and the utilitarian hatchback has been embraced by Europeans for ages.

But let’s get back to the driving. As I hit a gently twisting road near Tesla’s factory, where the launch party for employees would later be held, I briefly flipped on Tesla’s Autopilot. The road lanes were poorly marked, but the car had no problem smoothly tracking its course and slowing when traffic demanded it.

Tesla made an interesting choice to add Autopilot to the car’s main shifter. Flick it down twice, and Autopilot engages. It feels more integrated with the regular flow of driving. Autopilot has come a long way in recent weeks, but still has a long way to go for Tesla to justify the $8,000 it’s been charging since October for Autopilot and a set of yet-unseen features called “Full Self-Driving Capability.”

Last year I wrote about a subculture of Tesla drivers who go camping in the back of their cars. It sounds crazy at first, but the car’s massive battery can maintain perfectly controlled climate all night while only losing about 7 percent of the car’s range. With the glass canopy overhead and the view of the stars, it’s a great way to enjoy national parks without the bother of a campsite. I tried it myself and loved it.

With the new Model 3, there’s great news for those Tesla campers and others who like to haul long cargo. The seats of the Model 3 fold completely flat, and with the front seats in their most forward position, the back bed measures an impressive 6 feet 9 inches long (206 cm). This is a car that’s dying to be slept in.

Though being able to camp in your car is fun, staying safe on the road is of significantly greater importance. Tesla aspires to be the world’s safest automaker, and the Model 3 is no exception. While the final safety scores by ratings agencies aren’t out yet, some of the evaluations have already been conducted. The video below compares the side-impact test of the Model 3 against the Volvo S60, which is considered to be one of the safest cars on the road.

“In the Model 3, you’re fine,” Musk said. Meanwhile, “the Volvo is wrapped like a burrito around a coat hanger. It’s not good.”

Despite all of these achievements in range, technology, and safety, Musk sounded grave about the road ahead. “The biggest challenge that we face here is ‘S Curve’ manufacturing,” he said, describing a ramp up of production that starts slow, then increases dramatically before tapering off. “That ‘S’ portion is us going through hell, basically.”

Musk reiterated his projections of a very slow start in the next few months and then increasing rapidly to a rate of 20,000 a month by the end of the year, and 50,000 a month by the end of 2018. It’s an aggressive schedule that would more than double Tesla’s total production rate in six months, and then quintuple it by the end of next year. Musk alluded to this challenge at the launch event when he joked to a sea of cheering employees, “Welcome. Welcome to production hell.”

Here’s his best guess for how the rest of 2017 will play out:

The key obstacle, of course, is making all of these cars quickly enough and without the problems that plagued the launch of its more complicated Model X. Tesla is counting on everything going right at its car plant in Fremont, California, as well as its massive battery factory under construction near Reno, Nevada. Musk previousl said that 2 to 4 new plant locations will be announced by the end of this year.

I asked Franz von Holzhausen, Tesla’s chief designer responsible for the Models S, X, and 3, what are his favorite design elements of the Model 3. He didn’t mention the curves and angles, the elegant fold-in door handles, or the maximal use of space—all great design accomplishments in their own right.

Instead he talked about the “ambiance of the car”—the “beautiful, clean, minimalistic interior that will let you focus on the driving.”

“The interior is nothing like any other car out there,” von Holzhausen said. “It’s incredibly advanced” and “will age gracefully.”

For a person who hasn’t seen the car, that’s probably a vague and unsatisfying answer. But having driven it, ridden as a passenger, and climbed all over the backseat and trunk trying to take its measure for a future camping trip, I really couldn’t have said it better myself.