London and New York, May 15, 2019 – Electric vehicles, or EVs, are on track to dominate global sales of passenger cars and buses by 2040, and to encroach significantly on the market for vans and short-distance trucking, according to the latest forecast from research firm BloombergNEF (BNEF).

Based on analysis of the evolving economics in different vehicle segments and geographical markets, BNEF’s Electric Vehicle Outlook 2019 shows electrics taking up 57% of the global passenger car sales by 2040, slightly higher than it forecast a year ago. Electric buses are set to hold 81% of municipal bus sales by the same date.

For the first time, BNEF has incorporated in its forecast detailed work on the commercial vehicle market. These projections show electric models taking 56% of light commercial vehicle sales in Europe, the U.S. and China within the next two decades, plus 31% of the medium commercial market.

Heavy trucks will prove the hardest segment for electrics to crack, with the latter’s sales limited to 19% in 2040. Their use case will mostly be in shorter-distance applications. However, conventional heavy trucks on long-haul routes will also face other, non-electric competition – from alternatives using natural gas and hydrogen fuel cells.

Colin McKerracher, head of advanced transport for BNEF, commented: “Our conclusions are stark for fossil fuel use in road transport. Electrification will still take time because the global fleet changes over slowly but, once it gets rolling in the 2020s, it starts to spread to many other areas of road transport. We see a real possibility that global sales of conventional passenger cars have already passed their peak.”

The role of shared mobility services such as ride-hailing and car-sharing will be important in this evolving picture. These services account for less than 5% of all passenger miles travelled globally at the moment, but this is set to rise to 19% by 2040. The BNEF team does not expect autonomous driving to have an impact on global transport and energy patterns until the 2030s.

The main driver for the electrification trend over the next 20 years will be further sharp reductions in EV battery costs, making electric cars cheaper than internal combustion engine (ICE) alternatives by the mid-to-late 2020s in almost every market, on the basis of both lifetime costs and upfront costs. Since 2010, the average cost of lithium-ion batteries per kilowatt-hour has fallen by 85% on a mixture of manufacturing economies of scale and technology improvements.

The BNEF report sees China continuing to lead in electric cars, accounting for 48% of all passenger EVs sold in 2025 and 26% in 2040 when other markets are catching up. Europe pulls ahead of the U.S. as the number two EV market globally during the 2020s. Electrification in non-China emerging markets will be much slower, leading to a fragmented global auto market.

The aggregate increase, however, will be impressive. BNEF expects passenger EV sales to rise from 2 million worldwide in 2018 to 28 million in 2030 and 56 million by 2040. Meanwhile conventional passenger vehicle sales fall to 42 million by 2040, from around 85 million in 2018. Policy support such as fuel economy regulations and China’s new energy vehicle mandate are expected to drive the EV market in the next 5-7 years before economics takes over the latter half of the 2020s.

The oil, electricity and battery industries will all be impacted by the rise of EVs. A year ago, BNEF estimated their impact on road fuel demand at 7.3 million barrels per day by 2040. However, it has now nearly doubled this to 13.7 million barrels per day, partly because of new forecasts for electrification of the commercial vehicle sector and partly, paradoxically, because ICE fuel efficiency is expected to proceed more slowly than previously thought. That means that every EV displaces a conventional car that would have used a greater quantity of road fuel.

BNEF now estimates that EVs will add 6.8% to global electricity consumption in 2040, and that they will drive a surge in EV lithium-ion battery demand from 151 gigawatt-hours in 2019 to 1,748GWh in 2030. New mining capacity for all battery materials will need to come online to avoid this causing a supply crunch.

McKerracher said: “Transport is moving into a period of disruptive change, with many different factors coming into play. We have incorporated several new elements into our analysis, including an updated EV cost model that includes the cost of a home EV charger to reflect more accurately the costs individuals face to go electric; and a battery chemistry forecast for each of the new segments covered in this year’s report.”

Despite the radical changes afoot, the outlook for road transport emissions remains far from rosy. The BNEF team sees the size of the global on-the-road conventional passenger car fleet continuing to grow until 2030. This means that road vehicle emissions will continue to rise for the next decade, followed then by a sharp fall in the years before 2040, which will only return them to levels similar to 2018. 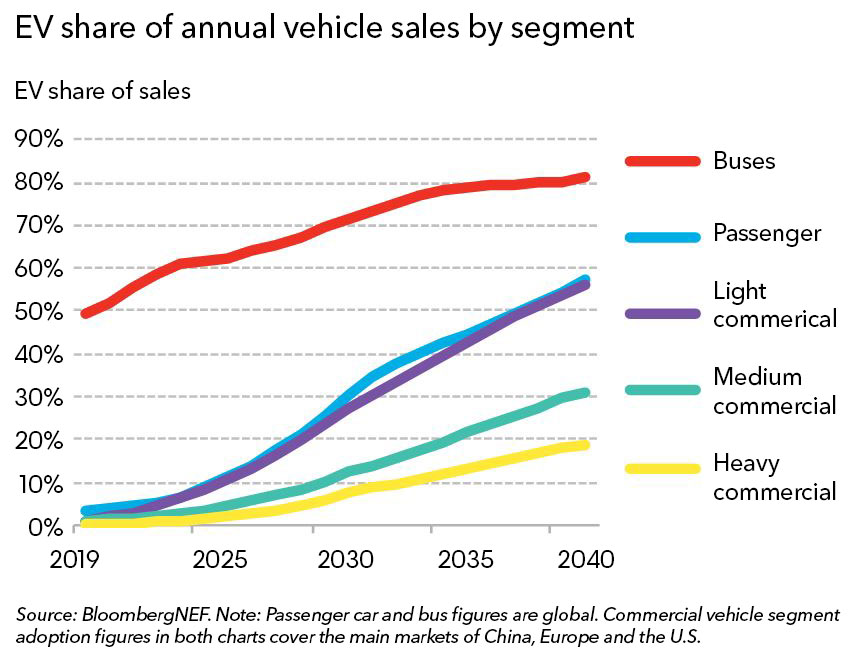 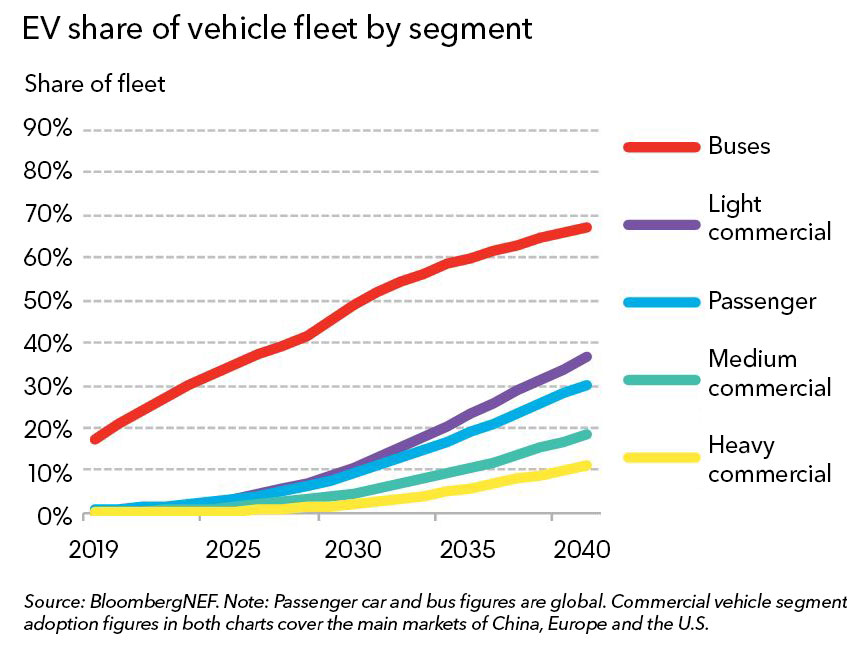