An energy transition is underway. Solar and wind are being added in ever-greater numbers. Electric vehicles are becoming more commonplace. Meanwhile, policy makers are grappling with the right mix of policies to pay for it all.

Bloomberg New Energy Finance’s conference on the future of energy in Asia assembled industry executives, policy makers and bankers to tackle some of the big questions surrounding energy.

“The past tells us a very clear lesson, and that is that we have underestimated the pace of the energy transition,” BNEF analyst Kobad Bhavnagri said as the conference started in Shanghai. 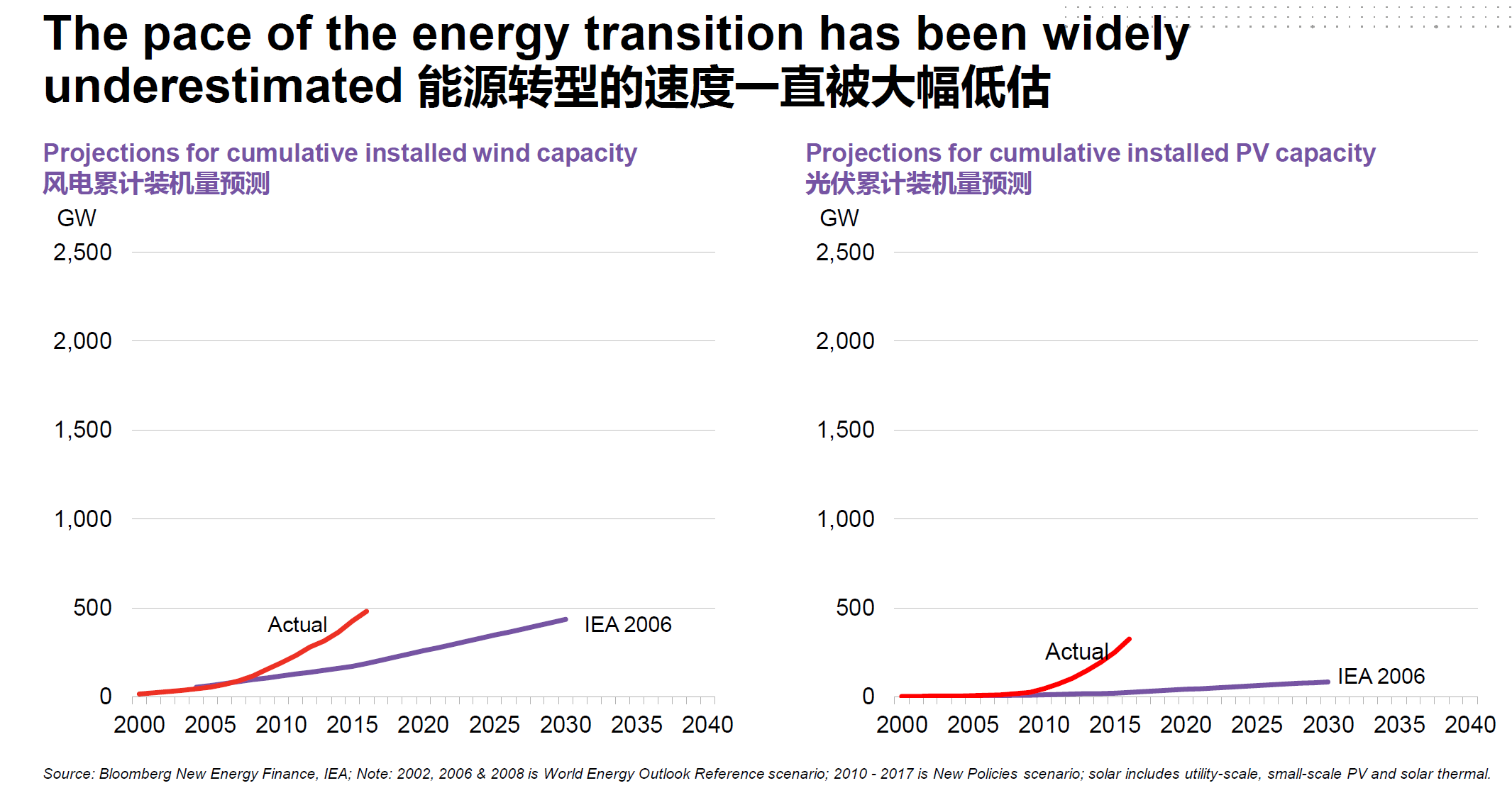 Here are some of the highlights from Tuesday’s presentations:

EVs are here to stay

Electronic vehicles have become a key element of the energy transition.

BNEF expects 530 million EVs on the road by 2040. Moreover, the researcher expects more electric buses and trucks as that segment of the transportation market becomes more attractive for electrification.

The implications for oil are significant, with the researcher expecting EVs to displace 8 million barrels of daily oil demand by 2040. Meanwhile, China is not only interested in EVs for the domestic market. The world’s most-populous nation is aiming to become a globally competitive automaker by the 2020s — with the latest EV technology.

“The disruption will come very fast because of economies of scale,” said Tomas Kaberger, chair of the executive board at the Renewable Energy Institute in Tokyo.

Technology is always a topic of conversation in energy circles, especially among some energy economists and policy makers who say dramatic breakthroughs are needed to achieve the reduction in emissions needed to stave off the worst impact of global warming.

But don’t expect any huge development in the imminent future. Rather, clean energy technologies like solar and wind will continue to eke out gains by becoming cheaper and more efficient, or in the case of batteries, able to store more energy in the same amount of space.

“We are going to see continued industry-based learning that will bring down costs,” Kaberger said.

Others see the necessity for a bigger leap in technology.

“We need to see negative emissions,” said Yukari Yamashita, a board member and director of energy data and modeling at the Institute of Energy Economics, Japan, who sees the need for new technologies such as space-based solar energy to close the gap.

Battery costs are coming down and energy densities are increasing. Battery pack prices fell about 22 percent from 2010 to 2016, according to BNEF. In turn, battery manufacturers are ramping up capacity — good news for Asia where most of the battery capacity is centered.

Asia’s lead is about to become even bigger. Contemporary Amperex Technology Co. plans to raise as much as 13.1 billion yuan ($1.98 billion) through an initial public offering in Shenzhen, enabling the Chinese maker of electric vehicle batteries to expand capacity enough to make it the world’s biggest lithium-ion battery maker, according to BNEF estimates.

Japan isn’t sitting idle. Battery-based storage designed to help integrate renewable energy in the resource-poor nation is set to surge almost sevenfold to more than 1.5 gigawatt-hours of capacity by 2020 from 2016 levels, according to a recent BNEF research report.

LNG will remain in the mix

Gas still has an important role to play in the energy transition, with China, Japan and South Korea expected to account for a significant increase in demand by 2030. On the supply side, North America and Australia are set to play a bigger role.

LNG will play a crucial role in the energy mix for some time to come, especially when other sources fail, according to BNEF analyst Ashish Sethia, who points out floating storage and regasification are being used more globally.

In September, BNEF released an outlook showing that LNG demand was growing at the fastest pace since 2011, shrinking its earlier forecast for an oversupply of the fuel.

“LNG is going to be a big part of the jigsaw, particularly when you thing about acceleration,” BNEF Chief Executive Officer Jon Moore said. “We’re very bullish about gas and we’re going to be covering this a lot more.”

But the transition won’t be easy

The momentum is clearly in favor of more renewables — whether wind, solar, biomass or some other technology. But challenges remain.

In the EV market, for example, a shortage of charging infrastructure, policy changes less supportive of EVs or a slowdown in the price declines for lithium-ion batteries could all conspire to slow the advance.

Falling prices for renewables will spur wider acceptance by consumers, though that will bring problems of its own, speakers at the summit said. Taxpayers will have to pick up the tab for the cost of obsolete energy capital that’s being undercut by renewables, said the REI’s Kaberger.

The transition to renewables will be easier if politicians don’t try to protect traditional energy generators from competition, Kaberger said.

“Taxpayers may not want to bear the cost of old energy,” he said.