Elon Musk’s intervention in Australia’s energy crisis is widening a divide over the future of coal.

The billionaire Tesla Inc. founder, who has promised to help solve an Australian state’s clean energy obstacles, sees no place for the fossil fuel. That conflicts with the national government’s push for it remaining a mainstay source of electricity generation, as well as the “clean, beautiful coal” technologies that U.S. President Donald Trump sees helping to save American mining jobs.

“Coal doesn’t have a long-term future,” Musk told reporters in Adelaide last week during a short trip to Australia. “The writing’s on the wall.”

His declaration in energy-strapped South Australia, where the 46-year-old entrepreneur announced plans to build the world’s biggest battery to support the state’s blackout-plagued power grid, has rankled lawmakers.

Energy minister Josh Frydenberg, 45, accused the state of tapping a celebrity to paper over its patchy clean energy record. Tesla’s battery plan “is a lot of sizzle for very little sausage,” Frydenberg, a member of the conservative Liberal-led federal government, said Monday. Deputy Prime Minister Barnaby Joyce, 50, said Musk’s plan “doesn’t make a hell of a lot of difference” to the nation’s struggles over energy security.

Most of Australia’s states and territories — free to determine their own energy and climate policies independent of the national government — beg to differ. Just hours after Musk’s announcement, the neighboring state of Victoria closed the door on new coal-fired power stations, saying energy companies would rather invest in renewables. 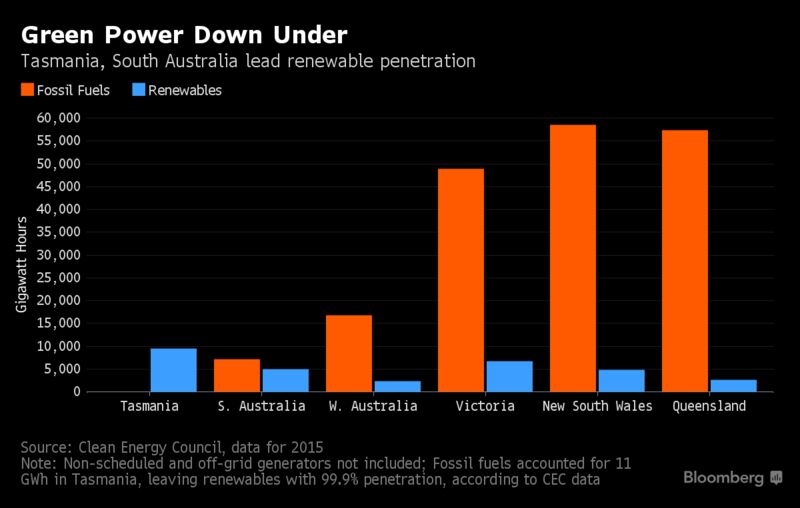 The northern state of Queensland, where India’s Adani Group is planning to develop the $16.5 billion Carmichael coal mine, expects a move to clean energy will completely wipe out its carbon emissions by 2050.

Energy policy is a fraught subject Down Under, where a push by the majority of Australians for more renewable power sources is clashing with the government’s political imperative to keep a lid on soaring power prices. Currently, some 76 percent of Australia’s electricity is drawn from coal-fired power stations which, while a cheap supply source, are at odds with a commitment to lower climate emissions.

A series of power outages in South Australia the past year spurred fears of more widespread blackouts across the nation’s electricity market and raised questions as to why one of the world’s largest producers of coal and gas is struggling to keep the lights on in a mainland state.

The nation’s largest and also dirtiest power generator, AGL Energy Ltd., says its investment appetite for coal has reversed in the space of just a few years. The economics of building new coal plants don’t stack up and increasingly renewables will dominate base-load power, AGL Chairman Jeremy Maycock said last week. Australians overwhelmingly want the government to focus on clean energy, according to a June poll by the Sydney-based Lowy Institute.

“It’s highly improbable that AGL will be constructing new coal-fired power stations because we don’t think the economics are likely to favor that,” Maycock said in a phone interview. “As  the largest generator we want to play our fair share in the country’s emissions reduction targets.” 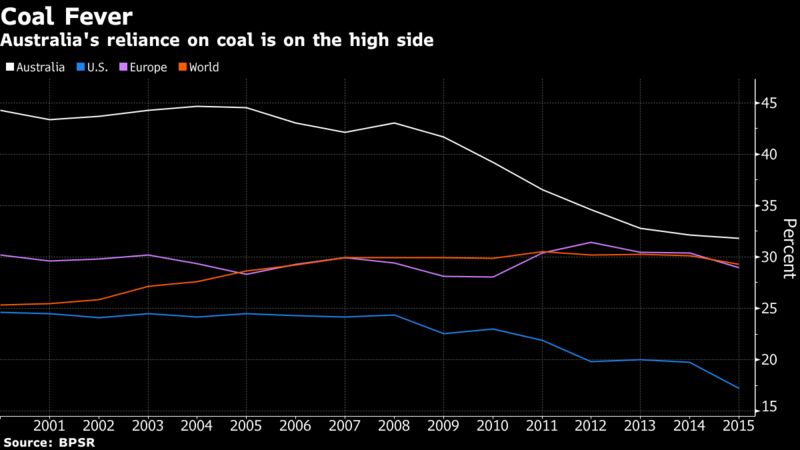 For Prime Minister Malcolm Turnbull, banging the drum on coal is proving a treacherous task.

In 2009, Turnbull lost his job as leader of the then opposition Liberal Party to Tony Abbott due to his support for an emissions trading program that was eventually installed by a Labor Party government in 2012.

After defeating Labor in 2013, Abbott’s Liberal-National coalition dismantled the levy on carbon emissions, claiming it was responsible for higher electricity costs, and cut targets for how much energy Australia aims to draw from wind and solar generation by 2020.

While in power, Abbott claimed coal was “good for humanity” and his government attacked wind farms for being “ugly.” Since seizing the leadership from his unpopular predecessor almost two years ago, Turnbull has toned down the government’s attack on renewables.

Turnbull announced in March a plan to boost capacity at Australia’s largest hydro-electric power project by 50 percent in a bid to tackle surging electricity prices and supply constraints.

Yet the climate issue continues to create rancor within Turnbull’s party. When Chief Scientist Alan Finkel proposed last month that Australia gradually increase its renewable target to 42 percent by 2030, at least 22 members of his ruling coalition spoke out about it. Renewable energy generation provided 17.3 percent of Australia’s annual electricity generation in 2016, according to an annual report from the industry-led Clean Energy Council. 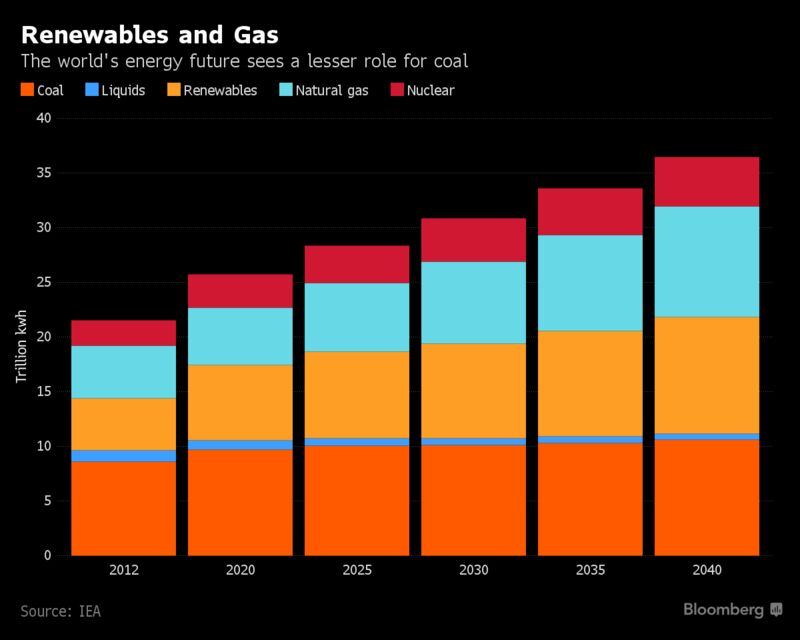 Abbott, who remains a lawmaker on the government backbench, is now calling for the government to subsidize the building of new coal-fired power plants even as investors shy away from it. Turnbull has refused to rule it out while his deputy Joyce has talked up the potential for the government taking an equity stake in any new plant. For now, the official political line is all energy sources need to be in the mix. Just don’t rule out coal.

“When it comes to energy sources, ours is a technology-neutral and all-of-the-above approach,” Frydenberg said in an emailed response to questions last week. “With a significant amount of base-load generation being phased out over the next 15 years, we need to ensure we are prepared and have enough power to meet future needs.”

Joyce, whose New England electorate in rural New South Wales is home to a number of coal mines, is typically more blunt. Not having any coal-fired power generation in Australia is “an absurdity,” he told Sky on Sunday.

Frydenberg and state and territory energy ministers agreed to implement 49 of the Finkel report’s 50 recommendations at a meeting in Brisbane on Friday. Among those endorsed were a requirement that renewable energy sources provide a backup in the event of blackouts, and that large power generators give at least three years notice before plant closures.

Not sanctioned was the report’s recommendation that a national clean-energy target be implemented. Instead, most state and territory Labor governments moved to have the Australian Energy Market Commission press ahead with designing options for a benchmark that could be introduced by the states.

Australia exported more coal than any other country in 2015, and has the fourth-largest share of the planet’s coal resources, the Department of Industry, Innovation and Science said in December. Still, the existing and perceived political and environmental costs attached to coal are deterring lenders.

“The high risk and cost associated with new coal plants make investors and financiers run a million miles from it in Australia,” said Ali Asghar, an analyst with Bloomberg New Energy Finance in Sydney. “The only way new coal could get built is if the government funds it and indemnifies any private entity against all future carbon risks.”

And doing so makes little sense, given that the cost of building cleaner, so-called high-efficiency, low-emission coal plants in Australia exceeds that of new projects relying on solar, wind, or gas, Asghar said.

“As solar and wind become cheaper and continue to undermine the economics of operating coal, investment in new coal plants become an even riskier proposition.”