Last year, energy transition and climate tech (renewable energy, energy storage, electrified vehicles and heating, hydrogen, nuclear power, sustainable materials and the carbon capture) attracted more than $900 billion. Energy transition investment alone reached $755 billion, up by a quarter over 2020 investment, double what was invested in 2015, and a more than 20-fold increase since 2004. 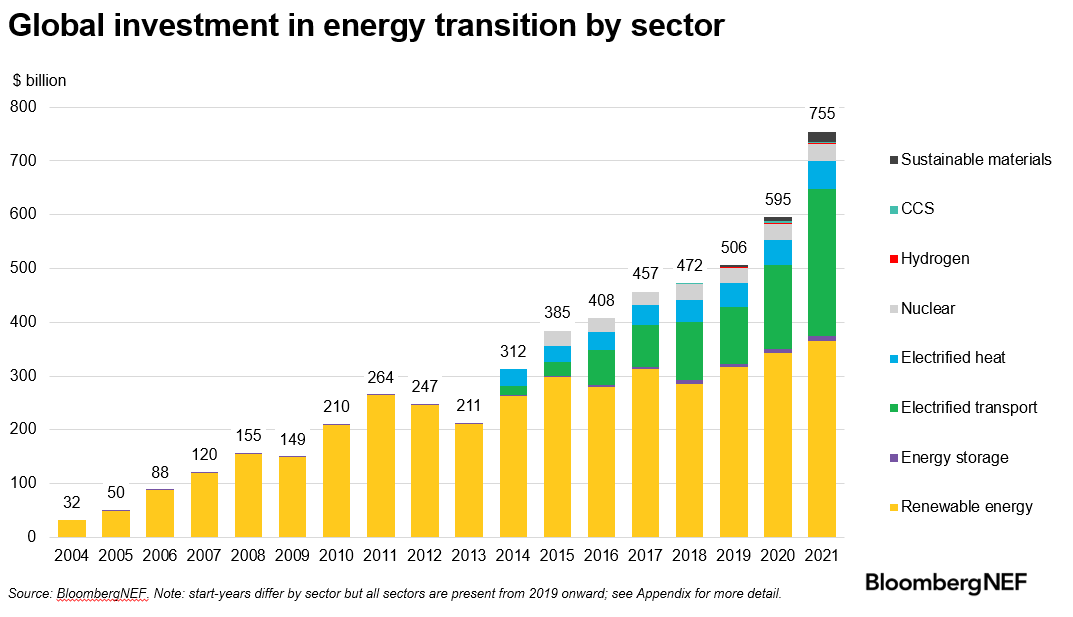 A look at compound growth rates shows these two trends very clearly. Electrified transport is growing at ten times the rate of renewable energy – and if that rate holds for just one more year, transport will be a bigger driver of energy transition investment than renewable power. It is worth watching energy storage’s growth rate as well, which at more than 30% means the sector investment doubles in a little over two years.

Equity capital markets were open for climate tech at every level last year – the IPO window was wide open, with companies raising more than $40 billion listings. Likewise, the special purpose acquisition company (SPAC) market boomed, with more than $35 billion deployed by investors who had raised capital in hopes of buying climate tech companies. The private placement in public equity, or PIPE, market was also liquid, though smaller at just under $14 billion. Secondary share sales by already-public companies topped $21 billion as well.

That leaves the final, and largest, asset class for climate tech: venture capital and private equity. VC and PE climate tech investment hit almost $54 billion last year. Importantly too, it was fairly consistent throughout the year, whereas public market activity shrunk to near-zero in April and again in October 2021. 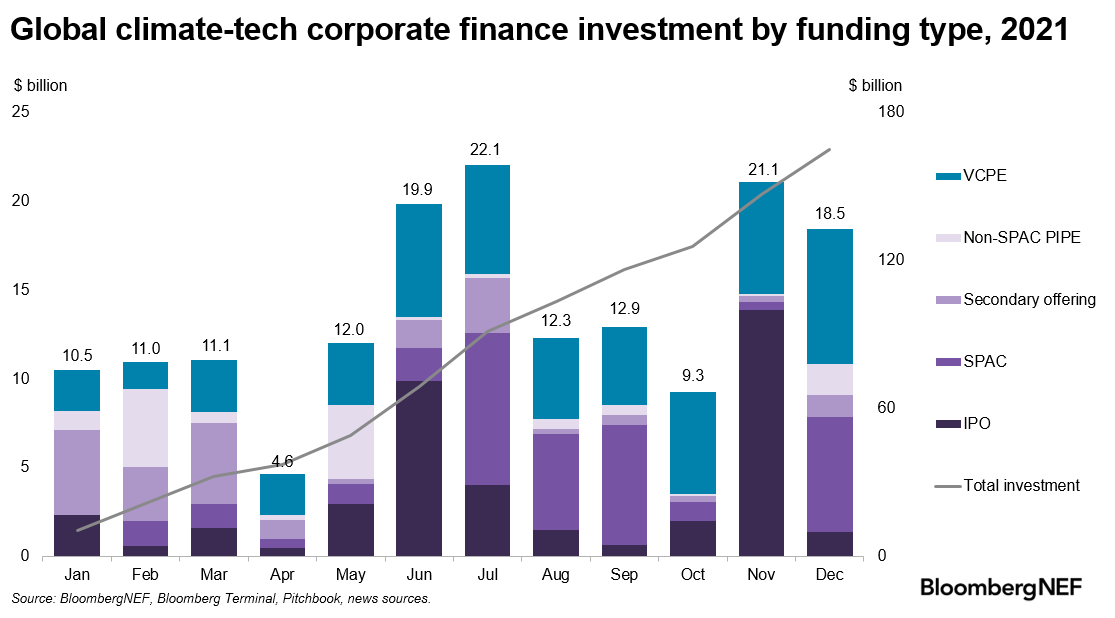 Climate tech VC and PE flowed into all sorts of sectors, but transport (41% of total) and energy (27% of total) took in more than two-thirds of all early-stage investment dollars. Agriculture was next, followed by climate and carbon services companies. The buildings sector lagged far behind, raising only 3% of total early-stage climate tech dollars last year. As climate tech companies mature and move from VC and PE dollars to public markets liquidity, their capital needs increase. Making the move from innovation to deployment is not a matter of degree – it is a matter of orders of magnitude. Even if only a fraction of companies supported by last year’s $54 billion in climate tech VC and PE succeed at global scale, their capital needs for deployment will be in the hundreds of billions of dollars. Combine their potential successes with continued incremental growth in renewable energy, and massive growth in electrified transport, and energy transition investment will hit the $1 trillion annual mark quite soon.

For more detail on these findings, an abridged version of the 2022 Energy Transition Investment Trends Report can be downloaded from this page. BNEF subscribers can find the full report on the client website and on the Bloomberg Terminal.