The European Parliament has agreed on the market reforms aimed at strengthening the European Union Emissions Trading System (EU ETS) after a divisive first vote earlier this month.

The new emissions reduction goal for sectors covered by the ETS is a 63% cut by 2030 from 2005 levels, more ambitious than the 61% curtailment proposed by the European Commission. In addition to faster emission cuts, the assembly also voted in favor of a speedier phase-out of free allowances and limits for financial speculators, among others.

Despite a compromise being reached, the market was seemingly unconvinced by the agreement, with EU carbon falling 4% to 81.20 euros per metric ton ($85.91 per ton) following the vote. 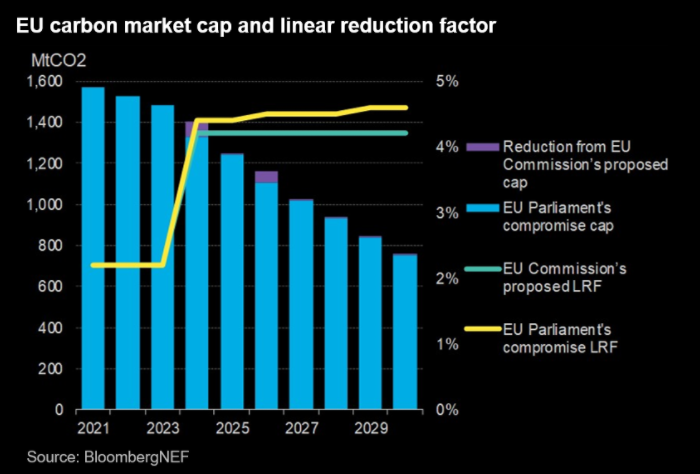 EU lawmakers also adopted a faster phase-out of free allowances as the bloc introduces a carbon border adjustment mechanism (CBAM) aimed to prevent so-called carbon leakage. The new timeline is a gradual decline from 2027 to 2032, instead of the Commission’s proposal of 2026 to 2036.

Phasing out the free allocation of allowances would ensure that the CBAM is aligned with World Trade Organization rules. It would also incentivize industries to act sooner on reducing their emissions, helping the EU to reach its ambitious climate goals.

The European Parliament also extended the scope of CBAM beyond the Commission’s proposal of cement, power, fertilizers, iron and steel, and aluminum. Polymers, organic chemicals and hydrogen will also be added. The first two will be subject to the Commission’s feasibility assessment. 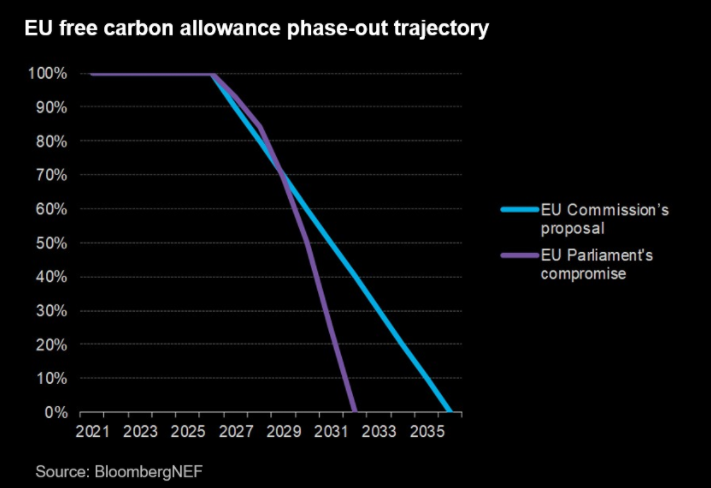 The influx of financial institutions into the EU ETS has prompted discussions around the need for additional stability mechanisms to limit speculation. The assembly today voted in favor of restricting market access to only compliance entities and financial intermediaries acting on behalf of compliance entities.

However, before these changes can be implemented, the Commission will need to present an impact assessment next year confirming that curbing speculators would not affect Europe’s climate goals.

EU lawmakers also supported strengthening the price control mechanism, known as Article 29a. The proposal would see Article 29a triggered if the price of EU emission allowances for the last six months is more than double the average price during the two preceding years. Currently, Article 29a only kicks in if the difference is more than threefold. If triggered, the mechanism would release more supply to the market. Parliament added a provision that the price trend needs to diverge from fundamentals before triggering the additional supply.

The report from an investigation conducted by the European Securities and Markets Authority (ESMA), the markets watchdog, concluded in March that there were “no major deficiencies in the functioning of the EU carbon market”. BNEF also sees more benefits in a relatively unconstrained European carbon market. If holding limits are introduced, they must not be so tight that they curb liquidity.

Maritime and waste to pay for emissions

Shipping will be required to comply with the emissions cap from 2024. The scope will include intra-EU voyages and half of the emissions from extra-EU voyages from 2024 to 2026. Emissions from all trips will be covered with possible derogations from 2027. Shipping is a hard-to-abate sector that is likely to have a high demand for emission allowances, which could subsequently drive up carbon prices.

The European Parliament wants to include greenhouse gases beyond carbon too, such as methane and nitrous oxide, and would also like to extend the scope to include municipal waste incineration from 2026.

Households and private transport carved out for now

The Fit for 55 proposal includes the establishment of a separate emissions trading scheme for buildings and transport from 2024. The European Parliament pushed for only the inclusion of the commercial part of these sectors. Homes and private vehicles will not be part of the program before 2029. A Social Climate Fund will be established to support the decarbonization of the new sectors.

This is unsurprising given the expected backlash from households due to the potential burden of high costs were the sectors to be included. The possibility of a high cost burden has been exacerbated by the current environment of high gas and power prices.

More negotiations before reaching a deal

The Fit for 55 package will still need the European Council’s agreement before starting the trilogue talks, in which the Parliament, Council and Commission will finalize the bills in these negotiations. The Council of member states, led by France, is expected to meet next week.