Europe plans to urgently diversify its gas supplies, while accelerating decarbonization efforts to reduce overall gas use. In a wide range of measures, European policy-makers are scrambling to reduce gas consumption in light of soaring prices and the Russian invasion of Ukraine. The European Commission released on March 8, 2022, its ‘RePowerEU’ plan, setting out measures to cut Russian gas imports by over two thirds in 2022. Half of the 102 billion cubic meters of natural gas to be cut are to be substituted with additional imports, while the rest will rely on behavioral energy savings and ramping up renewables deployments. 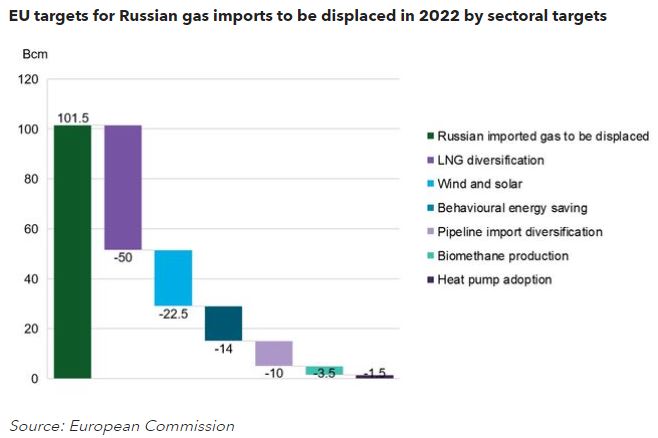 Gas markets were already very tight before the Commission announced ambitious LNG import and mandatory storage targets. BNEF analysis finds that global gas markets beyond 2022 now look even tighter, at least until new LNG export capacity comes online mid-decade. The European Commission wants to displace 50Bcm of Russian gas in 2022 and beyond with LNG imports – and Europe may have to pay dearly to attract LNG cargoes away from Asia. The measures push the LNG market into mild undersupply in the medium-term.

The plan also aims to structurally lower gas demand across European economies by 2030. Delivering this will rely on deploying wind and solar, renewable hydrogen and biomethane production capacity – and accelerating energy efficiency measures, including heat pump installations. The goals for renewables and hydrogen scaling to 2030 look ambitious, but possible. The effective implementation of changes to permitting rules for wind, and funding mechanisms for hydrogen projects, will be vital for their delivery.

The Commission aims to have a total of 480 gigawatts of wind and 420 gigawatts solar capacity by 2030. BNEF expects the bloc will overshoot on solar, by reaching 512 gigawatts of PV, and fall short on wind, with just 319 gigawatts installed by 2030. 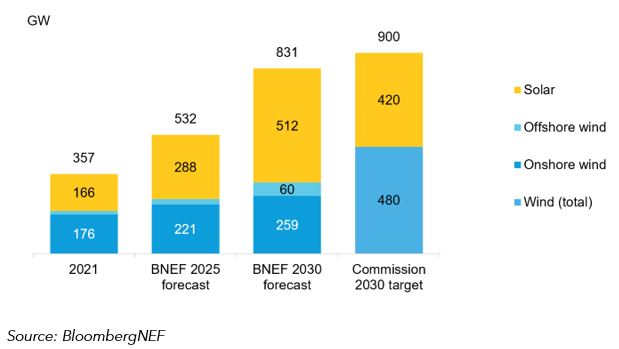 Accelerating onshore wind build in the EU will require fast action to streamline permitting – progress on which has so far been elusive. A controversial sticking point for the renewables industry will be a proposal to allow member state governments to claw back windfall energy market profits from wind and solar operators. Proceeds are earmarked to lower total energy costs for consumers.

BNEF subscribers can find the full report on the client website and on the Bloomberg Terminal.