Carbon emissions from road transport have been a major focus of efforts to counter climate change, and that has made automakers a key target for action. While the U.S. has wavered and seen a bit of state-level insurrection — and even pleas for action by automakers themselves — Europe has set a strict path for moving away from internal combustion engines and toward greener options.

The rubber will have to start meeting the road in the EU next year, as tough new rules for the amount of carbon released by car fleets will go into effect from January. These limits will tighten as the decade progresses, requiring 15% lower emissions by 2025 and 37.5% lower by 2030 in comparison with 2021 levels. Between 32% and 47% of new car sales in Europe will need to be electric vehicles by 2030 to meet the target, according to an analysis by BloombergNEF (BNEF).

Failing to meet the rules will mean big fines. BNEF has previously estimated that fines could total 12 billion euros, but the estimate is likely to rise. So where are the major automakers in terms of being prepared to meet the EU’s rules?

BNEF’s automaker analysis tool helps track how automakers are preparing for new emissions limits and to assess how ready they are. A glance at the tool highlights VW Group’s target of 2.5 million electric vehicle sales by 2025, with a range of 80 EV models. China’s Chang’an and Geely, and Germany’s Daimler and BMW are also shown having significant electric vehicle plans. 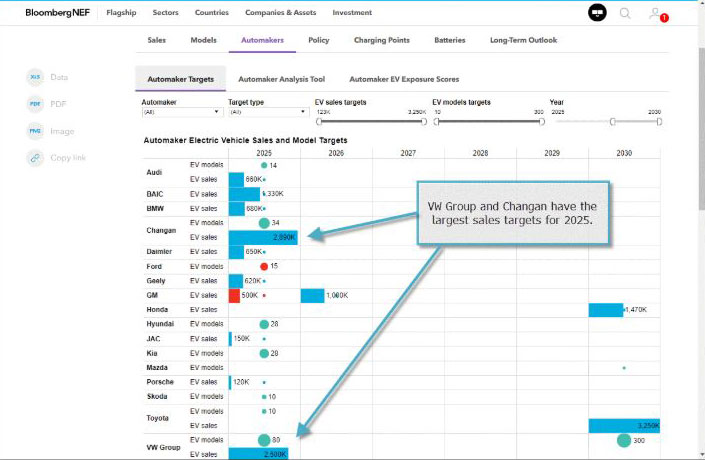 Another BNEF tool creates an “exposure score” based on the degree to which electric vehicles and plug-in hybrids feature in an automaker’s operations and future plans. BMW has the highest EV exposure score among European automakers, although it also has an aggressive plan of increasing sales of electric and plug-in hybrid vehicles by 30% every year until 2025 to help meet the new emission standards. 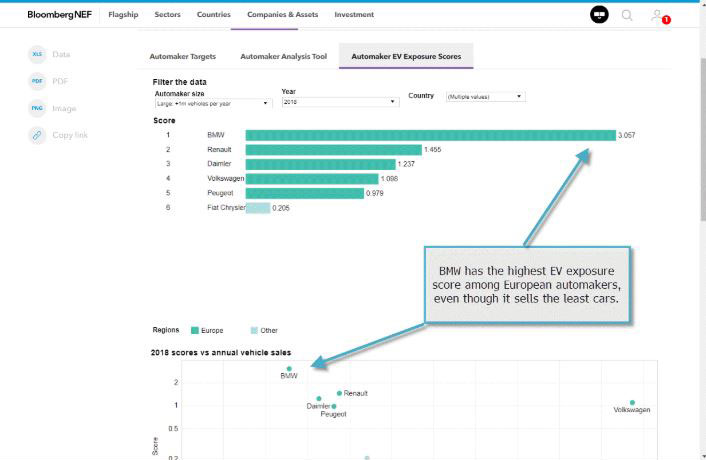 For more information on this or other functionality on the Bloomberg Professional Service, click here to contact us. Existing clients can press <HELP HELP> on their Bloomberg keyboard.