The bigger and more immediate threat to Norway as an oil nation is the drought in large discoveries and projects, Petroleum and Energy Minister Terje Soviknes said in an interview. At the same time, the market is finally showing signs of “rebalancing” after OPEC and non-OPEC cuts “have yielded results,” he said.

The prospect of oil demand peaking as the world switches to cleaner energy sources is fiercely debated in Norway. The future of the oil industry, which made the country one of the world’s richest, was one of the biggest issues in last month’s election. While drilling opponents only made small gains, Norwegians are questioning whether it makes moral and financial sense to explore for more oil, especially in the Arctic, as the world fights climate change.

Soviknes, like a majority of Norway’s elected politicians, says it does.

“I’m not that concerned with when exactly we get peak demand, whether that’s in 2030, ’35, ’40 — or earlier for that matter,” the 48-year-old minister said Tuesday at his office in Oslo. “What’s most important is that there’s high demand, and that’s going to be there for decades to come. We must position the Norwegian shelf for that.”

Consultant Wood Mackenzie Ltd. predicted in a report released this week that global oil demand growth will slow to a crawl and gasoline use will peak within the next decade, but that the world’s biggest energy companies can make up for the drop off by shifting to natural gas and chemicals.

So the bigger threat for Norway’s oil industry than the long-term disruption of energy markets, Soviknes argued, is its ability in the shorter term to maintain activity and competent industrial hubs if the explorers searching for crude along its coastline don’t make any big discoveries fast.

Norway, which has already seen about 50,000 jobs disappear from its offshore industry after oil prices collapsed in 2014, had its worst exploration results in a decade in 2015, and a record campaign in the Arctic Barents Sea this year was disappointing. Crude output is now just half of the 2000 peak, and despite a surge in natural gas production in the past decade, authorities are forecasting a new dip in total output starting in the middle of next decade. 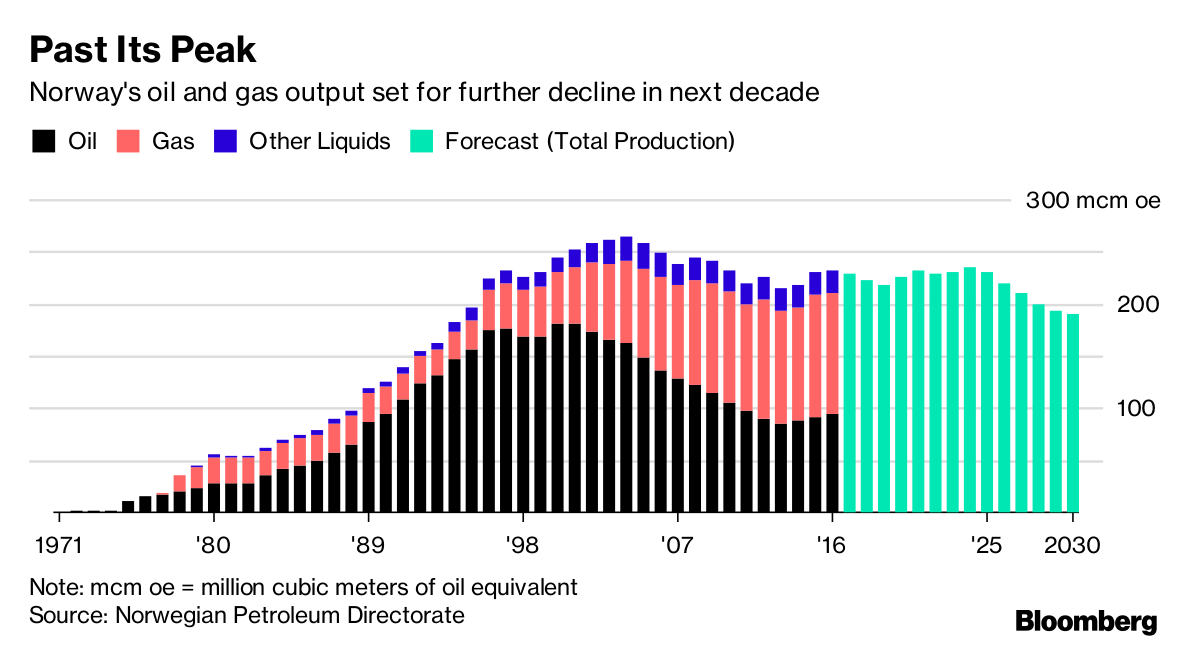 The industry is facing a dearth of large projects after state-controlled Statoil ASA’s $6 billion Johan Castberg, scheduled to start production in the Barents in 2022, Soviknes said. The giant Johan Sverdrup field, estimated to cost as much as $19 billion to develop, is slated to start pumping 2019.

Rather than scale back drilling, Norway’s government should continue to promote the opposite, he said.

“We need to get more, large development projects,” he said. “Access to acreage, which allows us to maintain a high exploration activity, is alpha and omega.”

The two government parties that won re-election in September, the Conservatives and Soviknes’ Progress Party, aim to keep awarding new blocks in the Arctic Barents Sea, the minister said. The two are currently negotiating a governing platform with the more oil-skeptical Liberal Party, but there should be no changes to the principle of awarding new acreage to explorers, Soviknes said.

While Soviknes said his party would like to retain the Petroleum and Energy Minister position in the government that emerges from the negotiations, he declined to make further comments on how the talks could affect energy policy in the coming years. He also declined to say whether he wished to stay on.

His comments came even as the newly re-elected government decided to form a commission to study climate-related risks for its economy, including the threat of energy-market changes on the value of its oil resources.

But for now, Norway is benefiting from higher oil prices as output cuts from OPEC and other producers such as Russia are finally taking a hold.

The spike in oil following a move by Iraqi forces to seize control of the Kirkuk region from Kurdish forces this week indicate a higher sensitivity in prices to geopolitical events, suggesting the market is getting closer to equilibrium, Soviknes said.

“All indicators point toward the fact that we have at least started on a rebalancing,” he said. “The inventories are falling, demand growth is still present.”