The idea was nothing short of revolutionary: convert the nation’s millions of trucks, buses and other commercial vehicles to run on natural gas instead of gasoline and diesel.

Back in 2008, the proposal by energy magnate T. Boone Pickens had some appeal. U.S. oil production was plunging, and the world’s biggest fuel-consuming country was becoming ever more dependent on foreign crude. Oil jumped to a record near $150 a barrel, while natural gas was comparatively cheap. Pickens co-founded Clean Energy Fuels Corp. to profit from the switch. The maker of natural gas filling stations was once valued at about $1.8 billion.

But there was a different kind of revolution. New drilling techniques led to a boom in oil supplies from the U.S., and electric cars took off. Tesla Inc., which had yet to deliver its first electric car a decade ago, now has 455,000 reservations for its Model 3 — almost 20 times the number of natural-gas vehicles on U.S. roads as of 2015. Shares of Clean Energy Fuels are down 90 percent from a 2012 peak, and the company concedes that natural gas may only be a niche market as a transportation fuel.

“I’m not sure America is set up” for widespread use of passenger natural gas vehicles given all the infrastructure needed to get supplies to customers, Andrew Littlefair, Clean Energy Fuels’ chief executive officer, said by phone. “There are a lot of reasons it would make sense to look at that again, but I don’t know that I’m ready to say that’s going to happen.” 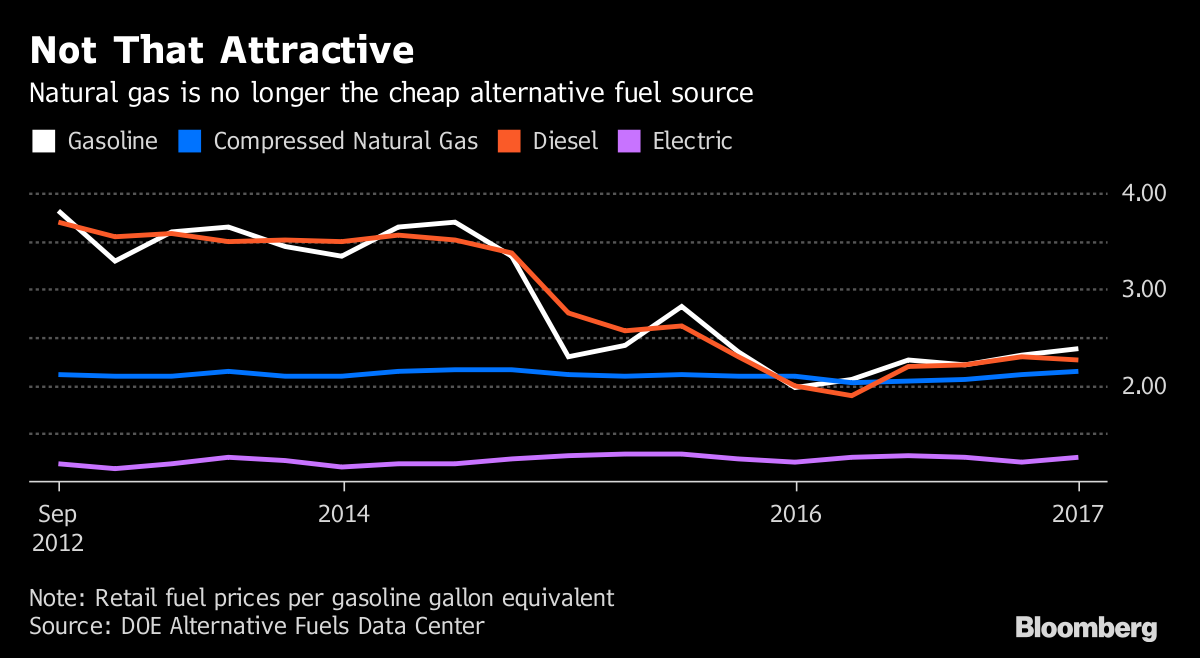 Pickens, who made his first fortune as an oil wildcatter five decades ago, had high hopes for natural gas because he believed crude supplies were peaking. In op-eds, media interviews and meetings with politicians including then-President Barack Obama, Pickens said the nation’s heavy-duty trucks and fleet vehicles should run on natural gas. The U.S. could reduce its reliance on oil imports and use more wind and solar power, he said.

By 2011, U.S. oil output began to surge with the shale boom. Three years later, prices for crude, diesel and gasoline were tumbling. While natural gas has become a staple for domestic power plants, supplanting coal, the prospect for cheaper alternatives made it less attractive as a vehicle fuel.

In April, the most recent month for data from the Department of Energy, liquefied natural gas sold for $2.52 per diesel-gallon-equivalent, compared with $2.55 for diesel. That’s hardly a bargain, considering Pavel Molchanov, an analyst at Raymond James Financial Inc., estimates that trucks that run on LNG cost about $30,000 to $50,000 more than a comparable diesel rig.

Even though natural gas has remained cheap — trading at $2.97 per million British thermal units in New York on Tuesday — using it to fuel vehicles is “not something that has taken off,” said Salim Morsy, an analyst at Bloomberg New Energy Finance in New York. “Gasoline and diesel are undoubtedly the cheapest in total cost of ownership, but as technology improves and batteries get cheaper,” the number of electric cars will at least double. 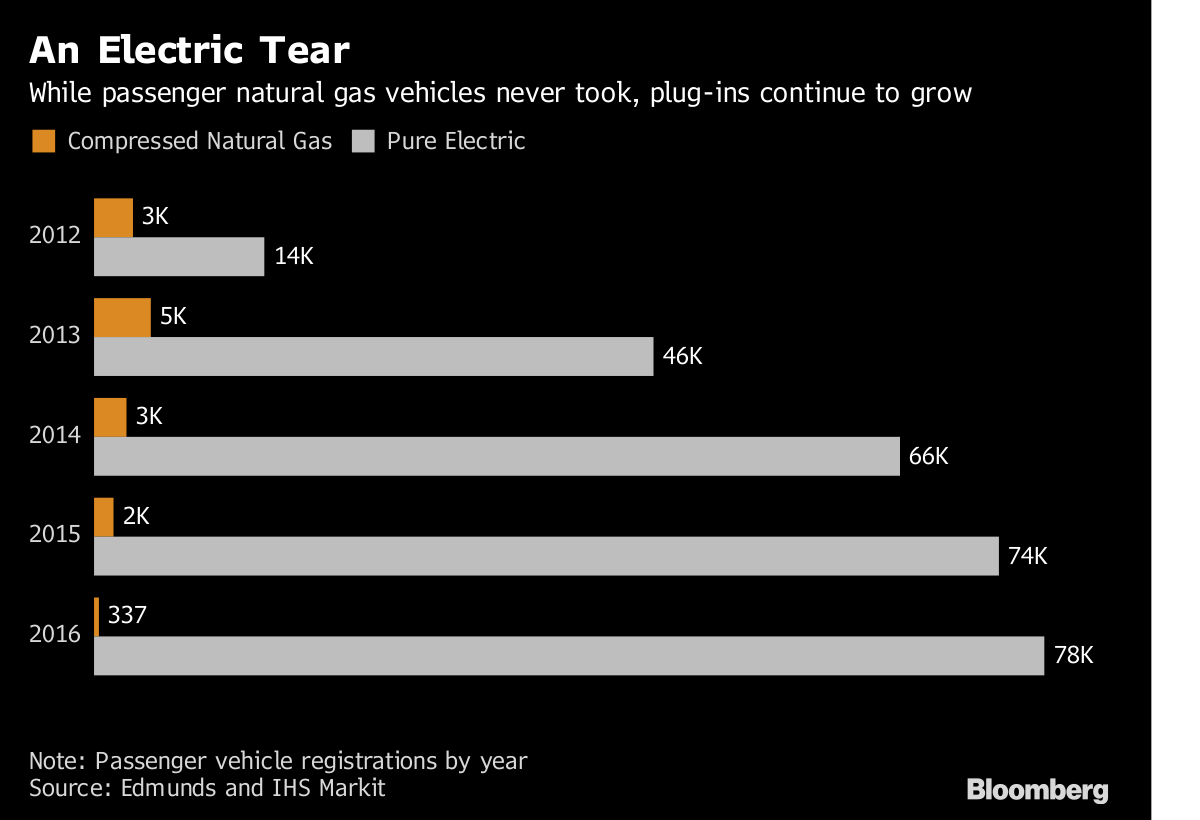 The number of plug-in autos in the U.S. almost tripled between 2008 and 2015, government data show. Tesla, the company founded by billionaire Elon Musk, has introduced three models since 2012, and other manufacturers are jumping into the market. Volvo AB has said all its new cars from 2019 will be hybrid or all-electric, and BMW AG is developing a self-driving electric to replace the 7-Series as the company’s flagship in 2021.

Natural gas vehicles have seen their share of the auto market shrink. Chesapeake Energy Corp., one of biggest U.S. gas producers, eliminated the team working on natural-gas vehicles in 2013. Honda Motor Co. discontinued a natural-gas-fueled model of its popular Civic sedan in 2015.

Last year, with oil locked in a prolonged price slump, Pickens sold about 4 million shares of Newport Beach, California-based Clean Energy Fuels, which operates more than 500 natural gas filling stations across the country. While the company has declined in value, Tesla traded at a record high in June.

Still, Littlefair sees opportunities for growth, especially in the fleets of vehicles owned by municipal governments trying to reduce tail-pipe emissions and operating costs. Dallas Area Rapid Transit, which uses 537 buses and 123 shuttles that run on natural gas, this month extended its operation and maintenance contract with Clean Energy Fuels. California cities including Los Angeles and Fresno also have contracts with the company.

Clean Energy Fuels is also seeking a way to expand its reach by using natural gas extracted from landfills and farms to supply filling stations.

While companies including AT&T Inc. and Ryder System Inc. use natural gas in trucks that make short trips and return to the same depot each day, limited infrastructure has prevented wider use. There are 1,828 natural-gas filling stations in the U.S., compared with almost seventy times as many conventional gas stations and around 38 times as many non-residential plug-in stations and charging outlets for electric vehicles, government and industry data show.

It can cost $1.8 million to build a filling station that supplies compressed natural gas, according to the National Renewable Energy Laboratory. Electric vehicles, in contrast, can be plugged into a home outlet.

“The infrastructure would be costly” for widespread use of natural gas vehicles, said Lee Klaskow, a senior analyst for transportation and logistics at Bloomberg Intelligence. “You would have to have some huge cost savings.”