The international marine fleet underpins the system of world trade and consumes around one in every 20 barrels of oil. Shipping industry emissions are significant, with the world’s merchant fleet emitting more CO2 each year than Germany.

From the start of 2020, International Maritime Organization (IMO) rules come into force that limit the sulfur content of marine fuels to 0.5% from the current limit of 3.5%. This change will have far-reaching consequences for the downstream oil industry. Vessel operators have two options to comply with the IMO rules: either switch to a sufficiently low-sulfur fuel, such as ultra-low-sulfur fuel oil (ULSFO), marine gasoil (MGO) or LNG; or install exhaust gas cleaning systems (EGCS) to ‘scrub’ SOx and particulate emissions aboard vessels. 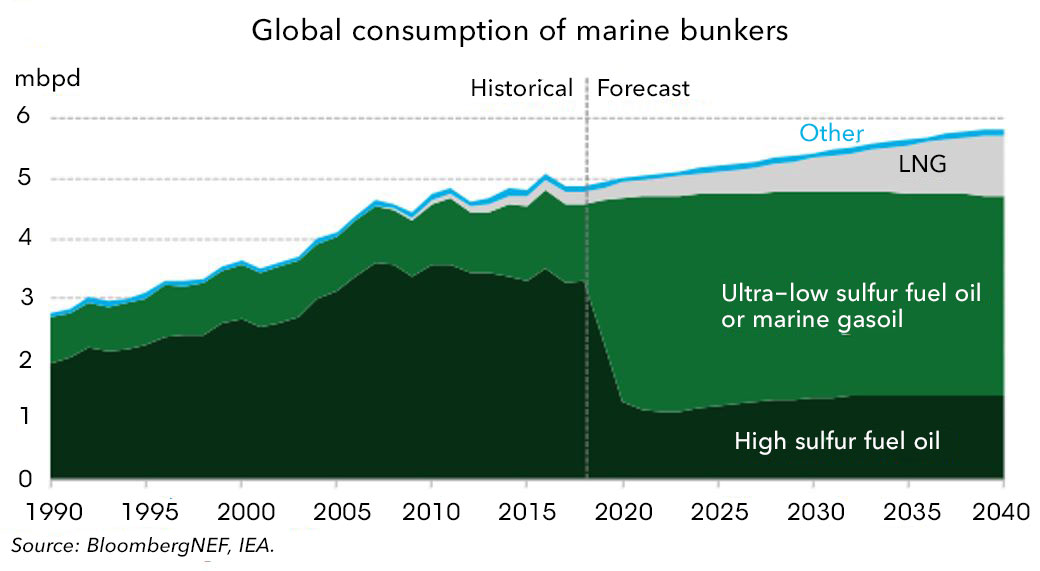 From 2018-21, BloombergNEF expect high-sulfur marine fuel oil consumption to fall by almost two thirds. In its place, consumption of ULSFO and MGO is set to increase by 2.3Mbd. We expect this to increase demand for middle distillates, which will be supportive of crude prices over the next 2-5 years.

Most ship-owners have so far steered away from installing scrubbers, favoring low-sulfur fuel to comply with the 2020 mandate. This will likely lead to higher fuel prices and increased scrutiny from ship-owners of the fuel efficiency of their vessels. Ships that are more expensive to operate and are at an economic disadvantage could make their way to the breakers yard, in turn supporting shipping rates.

Despite hugely challenging logistics to comply, and continued concerns around enforcement and the availability of complaint low-sulfur fuels, Bloomberg Intelligence believe 1Q20 will mark a successful transition for most of the world’s fleet into the low-emission era. Larger ships primarily serving well-established trade routes that typically call at major ports will find comfort in compliant fuel availability, while availability at smaller ports should also improve as demand increases.

In the longer-term, as vessels install scrubbers and as refiners increase desulfurization capacity, we expect fuel oil demand to recover slightly. LNG-fueled vessels will slowly increase penetration in the market, and by 2040 we expect LNG to account for around 18% of marine bunkers. Increased vessel efficiency and the growth of LNG causes oil demand from marine bunkers to peak around 2030.

Bloomberg Intelligence, the research arm of Bloomberg L.P., delivers in-depth analysis and datasets on industries, companies and the government, as well as credit and litigation factors that impact business decisions.