In Tackling the Carbon Footprint of Oil Majors, Digital Technologies Could be Key

As oil companies set more aggressive targets for reducing emissions, digital technologies might prove invaluable for Scope 1 and 2 emissions. Drones, sensors, satellite and camera data are essential in tracking potent methane emissions at oil wells and from pipelines, while machine learning is valuable in optimizing energy use in refining.

Oil majors appear to want to trap fugitive methane emissions first to show that they are taking their carbon footprint seriously. Members of the Oil and Gas Climate initiative (OGCI) set a target of bringing 2025 methane emissions to a 0.25% intensity (the percentage of leaked gas to total gas sales), one-fifth lower than the 2017 levels. This would reduce emissions by 350,000 tons of methane annually (8.8 million tons CO2 equivalent). Digital technologies will be essential in tracking emissions by site and in recording progress – as BP and EOG (among others) have made clear in their strategies. Five of the OGCI’s 12 investments have been in emissions monitoring from sensors, satellites and reporting.

Sensing the opportunity to sell to oil companies, startups are building technologies to track emissions. GHGSat, a Canadian startup, is launching nanosatellites with special cameras that can capture data on methane emissions site-by-site. Using cameras and satellites can be expensive. Project Canary is one company selling wireless, solar-powered sensors to be placed at well sites that can capture data on methane emissions more cheaply. 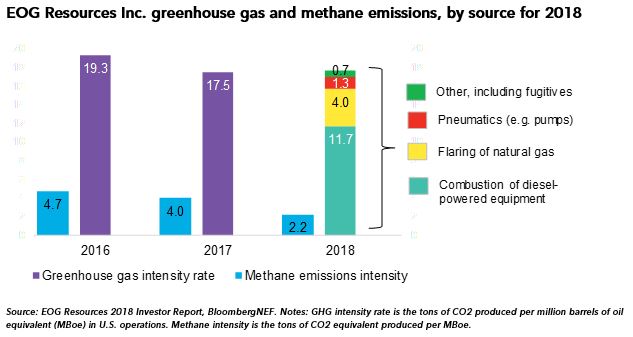 One area where oil companies can use digital technologies to tackle emissions is in energy use in refineries. The EIA and EPA report all U.S. refineries purchased 48 billion kWh of electricity and 48 million cubic feet of gas in 2018, equating to 345 million tons of CO2. This is 39 times the amount the OGCI wants to reduce in methane emissions annually. And the purchased gas and power at refineries is often only 20-30% of their total energy use. A U.S. Department of Energy study says that 26% of the countries’ energy use in refineries could actually be cut using new technologies, including data analytics.

Refinery energy efficiency could become a significant use of artificial intelligence

As refineries digitalize across the world and turn to big data analytics, they will become more cognizant of the energy use of specific equipment. Artificial intelligence algorithms can spot patterns in energy use to intuit wasted energy or faults with machinery, which will reduce industrial customers’ bills. Deep Mind has been successful with data centers, and Metron uses machine learning for manufacturing customers. There is yet to be any large deployment of AI in refineries for energy management, but there are some pilot projects. Repsol and Google Cloud partnered in mid-2018 to help the Tarragona refinery in Spain optimize energy and resource use, with machine learning. The oil company said the project has the potential to add 30 cents on the dollar to Repsol’s refined barrel margin.

While the direct emissions of oil companies are small compared to the emissions of their fuel products when burned, they are specifically emissions that the oil companies have control over to reduce. As such we see oil companies continuing to focus on capturing methane leaking and optimizing energy use across operations. In fact, there are indicators that regulators and customers are taking an increasing interest in total lifecycle emissions of fuels, not just their emissions when burned. For instance, the International Civil Aviation Organization has a carbon reduction scheme (Corsia) that takes the fuel lifecycle into account when grading fuels. This gives oil companies even more incentive to tackle their own direct emissions, and it seems certain digital technologies will play a part.