Written by Martin Ritchie and and Yuliya Fedorinova. This article first appeared in Bloomberg News.

Nickel rocketed to a two-year high in London and climbed by the daily limit in Shanghai, as investors bet on a long-term boost to demand from the rise of electric cars. Other metals also climbed.

Nickel advanced as much as 4.8 percent to $12,880 a metric ton on the London Metal Exchange, the highest since June 2015. That added to Tuesday’s 5.3 percent gain — the most in a year — after Trafigura Group Pte joined Glencore Plc in unveiling bullish usage forecasts. The metal was up 4.3 percent in Shanghai. 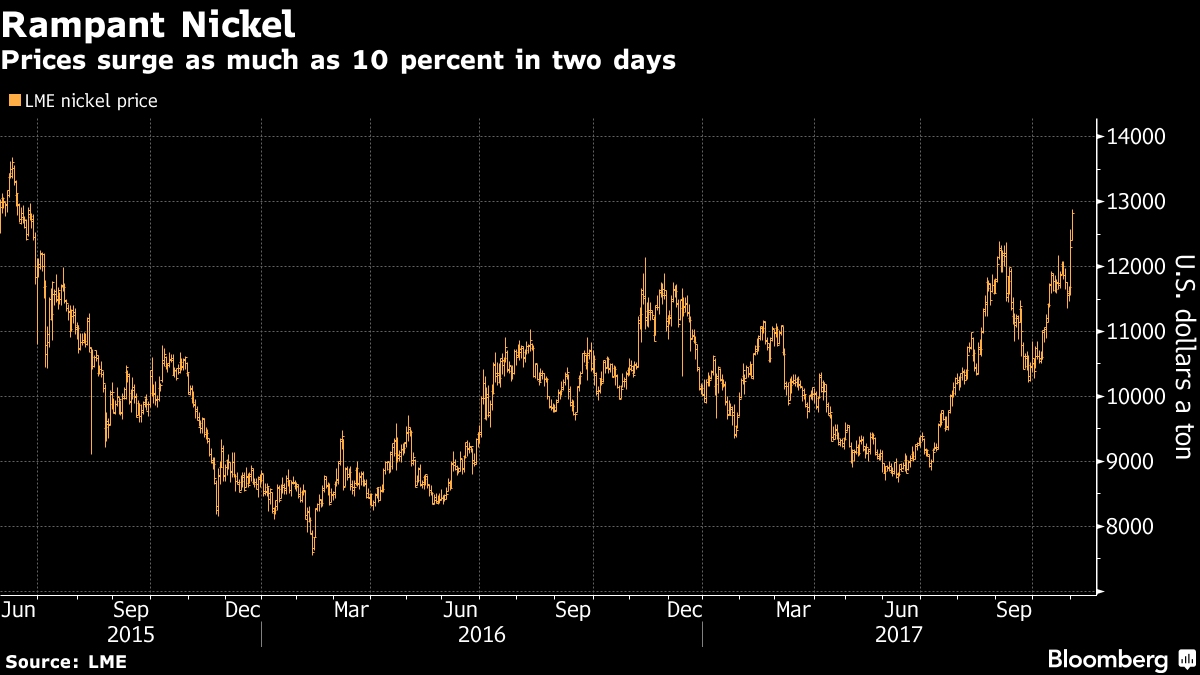 “Such breakthrough has been cooking long, backed by relative value and EVs,” Richard Fu, head of Asia Pacific at Amalgamated Metal Trading Ltd., said by email.

Nickel sulphate, a key ingredient in lithium-ion batteries, will see demand increase by half to 3 million tons by 2030, Saad Rahim, chief economist at Trafigura, said in an interview. That echoes bullish views from miner and trader Glencore. Batteries are likely to use more nickel and less cobalt in future, Rahim said in an interview.

Nickel is now up 28 percent this year and is among the best performers on the Bloomberg Commodity Index of 22 raw materials. Chinese investors piled into Shanghai futures at the start of morning session, and prices were locked up by the limit just short of 100,000 yuan a ton, the highest intraday level since November.

MMC Norilsk Nickel PJSC, which vies with Vale SA as the world’s top nickel producer, has warned that the market may have become too bullish too quickly. The company sees this year’s nickel demand from batteries at about 65,000 tons, compared with total usage of 2 million tons, according to Anton Berlin, head of analysis and market development. It will take a few years for EVs to become a significant consumer, he said,