North Carolina passed a clean-energy bill Thursday that could spur a wave of new solar projects in the country’s second-biggest solar state — but at the expense of wind.

House Bill 589, which Governor Roy Cooper signed Thursday, places a moratorium on new wind development through December 2018. The law creates a competitive bidding process that will bring more than 2.6 gigawatts of new solar over 3 1/2 years, Duke Energy Corp., owner of the state’s biggest utility, said. The legislation also allows customers to lease solar panels on their roofs instead of having to buy them, opening the market to third-party installers.

“This bill is critical for the future of significant increases in our already booming solar industry,” Cooper, a Democrat, said in a statement Thursday. “I strongly oppose the ugly, last-minute, politically motivated wind moratorium. However, this fragile and hard-fought solar deal will be lost if I veto this legislation and that veto is sustained.” 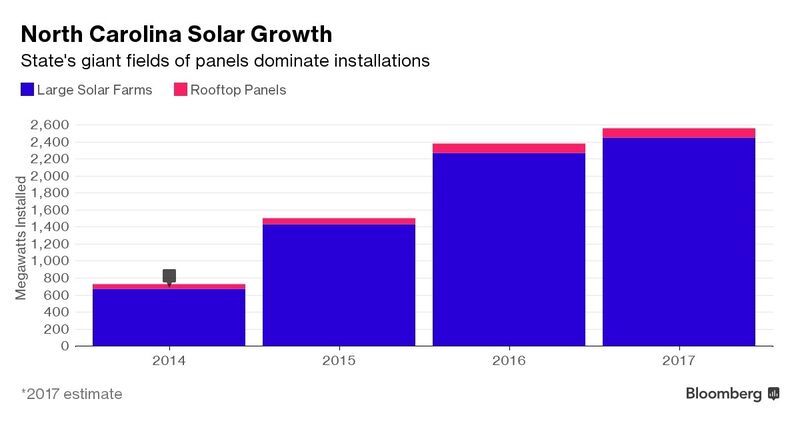 In an effort to minimize the moratorium, Cooper also signed an executive order that directed the state to make “best efforts” to expedite wind-project permit applications that were submitted by Jan. 1 of this year.

Duke “had no part in the wind moratorium,” spokesman Randy Wheeless said in an email Thursday. “In fact, we have 20 wind farms around the U.S. Our focus here was solar.”

“We look forward to working with the administration to help ensure that wind projects move forward without further delay once this unnecessary anti-business moratorium has lifted,” he said.

The bill limits small solar projects eligible for mandated utility contracts under 1978 law the Public Utilities Regulatory Policies Act, or Purpa. Eligible projects can’t exceed 1 megawatt — down from 5 megawatts, according to Bloomberg New Energy Finance. And utility contracts will be reduced to 10 years from 15 years.

Under the new bill, Duke contends that customers will save $850 million in purchased solar power over the next 10 years versus what it had projected under the existing Purpa system, Wheeless said.

“The bill will increase competition for renewable-energy development in North Carolina and lays out a clear path for Duke’s clean-energy procurement, but many of the developers that have thrived on Purpa will feel the negative impacts, as they are no longer guaranteed interconnection at Duke’s avoided cost rate for projects 5MW and lower,” Kyle Harrison, a New York-based analyst at BNEF, said in an email Thursday.

Abigail Ross Hopper, president and chief executive officer of the Washington-based Solar Energy Industries Association, said in a statement that the bill “will significantly enhance the solar market in North Carolina.” But she was critical of the wind moratorium.

“The last-minute inclusion of an 18-month wind moratorium was both unnecessary and disappointing and we hope the governor’s executive order can help mitigate that portion of the bill,” she said.