London and New York, 5 October 2017 – Seven giant wind projects, each costing between $600 million and $4.5 billion, and spread between the U.S., Mexico, the U.K., Germany, China and Australia, helped global clean energy investment to jump 40% year-on-year in the third quarter of 2017.

The numbers for the July-to-September quarter mean that investment in 2017 so far is running 2% above that in the same period of last year, suggesting that the annual total is likely to finish up close to, or a little ahead of, 2016’s figure of $287.5 billion. This year looks highly unlikely, however, to beat the record of $348.5 billion reached in 2015.

The stand-out move of the third quarter of 2017 was American Electric Power investing $4.5 billion in Invenergy’s 2GW Wind Catcher project in the Oklahoma Panhandle. Due to be completed by 2020, the project will have 800 turbines, connected to population centers via a 350-mile high-voltage power line. AEP still needs to secure some regulatory approvals, but construction has started and BNEF is treating the project as financed.

Amy Grace, head of North America research for BNEF, said: “Wind Catcher is an example of a regulated utility in a wind-rich area of the U.S. taking advantage of federal tax credits to build a project that will produce electricity at below the cost of its existing coal and gas generating plants.”

The other top asset finance transactions of the quarter were Dong Energy’s decision to proceed with the 1.4GW Hornsea 2 offshore wind farm in the U.K. North Sea, at an estimated $3.7 billion by the time it is completed in 2022-2023, and Northland Power’s financing of the 252MW Deutsche Bucht array in German waters, at $1.6 billion.

Breaking the 3Q 2017 figures down by type of investment, asset finance of utility-scale renewable energy projects, such as those above, jumped 72% globally compared to the same quarter of last year, reaching $54.3 billion. Small-scale project investment (solar systems of less than 1MW) came to $10.8 billion in the latest quarter, up 9%.

The two other areas of investment that BNEF tracks quarterly are venture capital and private equity investment in specialist clean energy companies, and equity-raising on public markets by quoted companies in the sector. Both these areas had subdued activity in the third quarter.

VC/PE funding was only $662 million in 3Q, down 79% from a very strong equivalent period a year earlier. July to September 2017 was the weakest quarter for this type of investment since 2005. The only deal to break three-figure millions was a $109 million private equity expansion capital round for Indian solar project developer Clean Max Enviro Energy Solutions.

Public markets investment was also subdued, down 63% year-on-year at $1.4 billion, its lowest quarter since 1Q 2016. The biggest equity raisings were by Chinese company Beijing Shouhang Resources Saving, to fund activity in solar thermal generation (a $675 million private placement), and a $314 million initial public offering by Greencoat Renewables, a Dublin-based investment company targeting operating-stage wind projects in Ireland and the rest of the euro area.

Abraham Louw, associate, clean energy economics at BNEF, commented: “The weak third quarter figure for public markets investment came ironically despite a strong performance from clean energy stocks, with the NEX index for instance rising 7.5% between the end of June and the end of September, and now standing 22% up since the start of 2017.”

Taking all the categories of investment (asset finance, small-scale projects, VC/PE, public markets, and an adjustment for re-invested equity) together, country-level results for the third quarter included:

The following chart shows the quarterly trend in clean energy investment by region. 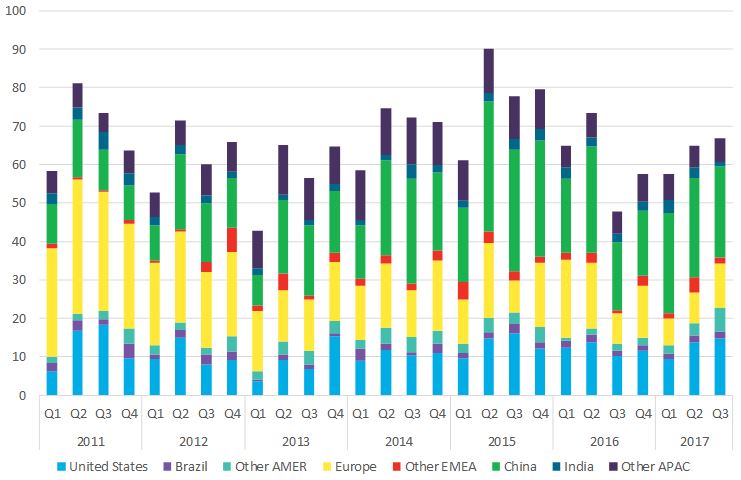 BNEF’s annual figures, published every January, include certain categories of investment that are not in the quarterly data – namely corporate and government R&D in clean energy and asset finance of smart meters and energy storage projects.

The report can be downloaded here.