Palladium climbed above $1,000 an ounce for the first time since 2001 on hopes for rising demand from the car industry amid a shortage of supply.

Prices for the metal used in catalytic converters to curb pollution from mainly gasoline-powered vehicles jumped as much as 1.8 percent to $1,009.50 on Monday, before trading at $1,004.81 by 11:18 a.m. in London. Gold held near a three-week high.

Palladium is one of this year’s best-performing commodities, advancing 48 percent, more than three times the increase in gold and about 10 times the gain in its sister metal platinum. 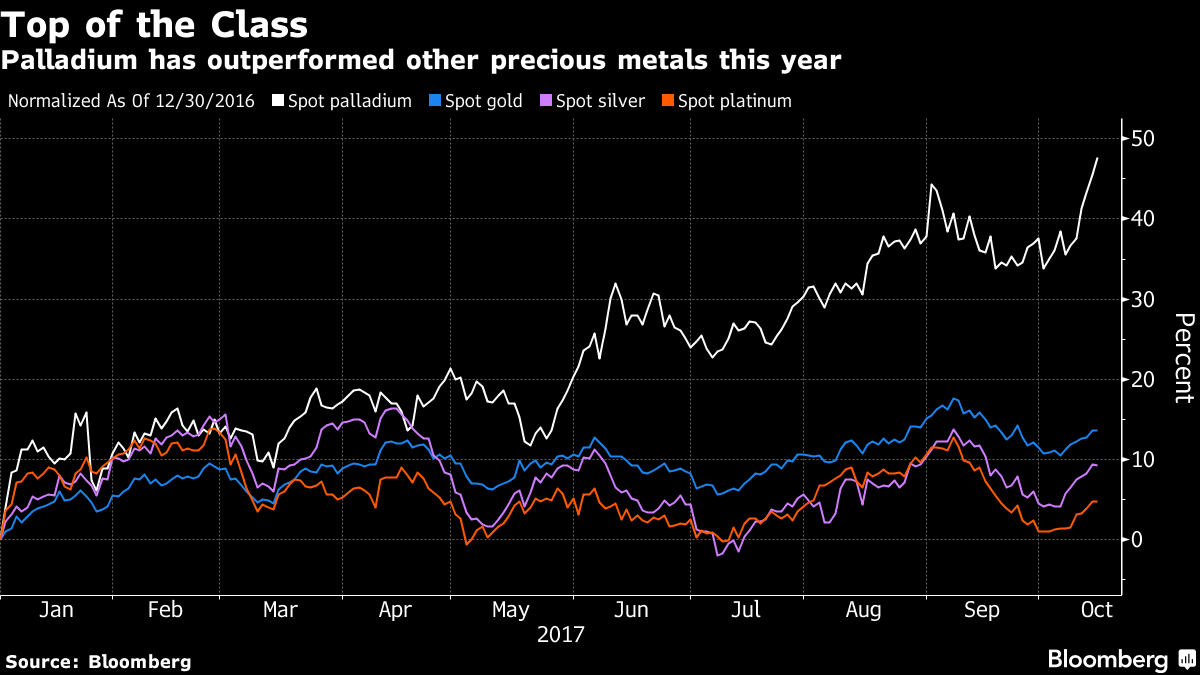 “Palladium continues to be driven by the positive momentum created by expectations of a supply deficit amid rising demand,” Ole Hansen, head of commodity strategy at Saxo Bank A/S, said by email. Industrial metals have risen this year as the world economy recovers, and copper burst through $7,000 a metric ton on Monday for the first time since 2014.

Palladium became more expensive than platinum last month for the first time in 16 years. Prices for platinum, used in autocatalysts for diesel engines, have been hit as some European carmakers admitted to cheating emissions tests for such vehicles, curbing consumer demand.

Things could get worse. Europe’s diesel-engine market share may fall by half by 2025, potentially removing 300,000 to 600,000 ounces of platinum demand in the next decade, according to Citigroup Inc. The bank sees global surpluses in platinum stretching out to 2020, while the shortfall in palladium is set to widen to more than a million ounces next year before narrowing to 750,000 ounces by 2020.

“Despite the PGM spread inversion since the end of September, we remain favorable to palladium over the short term,” Citigroup analysts including Nell Agate wrote in a note dated Oct. 13. “However, ever-looming substitution risks prevent an outright bullish view on palladium over the long term.”

Trading activity has also played a role in boosting palladium prices, Simona Gambarini at Capital Economics Ltd. in London, said by email. “As such, prices look vulnerable to a correction,” she said.

Gold touched the highest since Sept. 26, gaining as much as 0.2 percent to $1,305.91 before a host of Federal Reserve speakers this week who may provide clues on the outlook for U.S. monetary policy. Silver was little changed at $17.423 an ounce.