Inflation is taking off around the world, and one of the ways consumers are feeling the pinch is at the pump. As motorists pay near-record prices to fill up their tanks, oil companies, and their shareholders, are reaping the benefits of bumper profits.

Refiners enjoying this windfall are acutely aware, however, that the end of oil’s dominance on the world’s highways is on the horizon. Starting this decade, demand for gasoline and diesel is set to enter a long-term decline.

Here are five charts from BloombergNEF showing how the use of road fuels is expected to evolve over the coming decades.

2. Peak demand is less than five years away

Demand for road fuels is set to rebound to pre-pandemic levels this year, but that momentum is not expected to continue to the end of the decade. Under BNEF’s Economic Transition Scenario – which is driven by techno-economic trends and market forces, and assumes no new policies are enacted – overall demand would peak in 2027 at around 45.3 million barrels per day.

The path for the two major types of road fuel is projected to play out slightly differently, with peak gasoline demand arriving in 2026 and diesel following three years later. While it is not currently anticipated that the appetite for either fuel will disappear completely, demand for gasoline is projected to decline by almost two-thirds from its peak by 2050, and diesel by one-third. 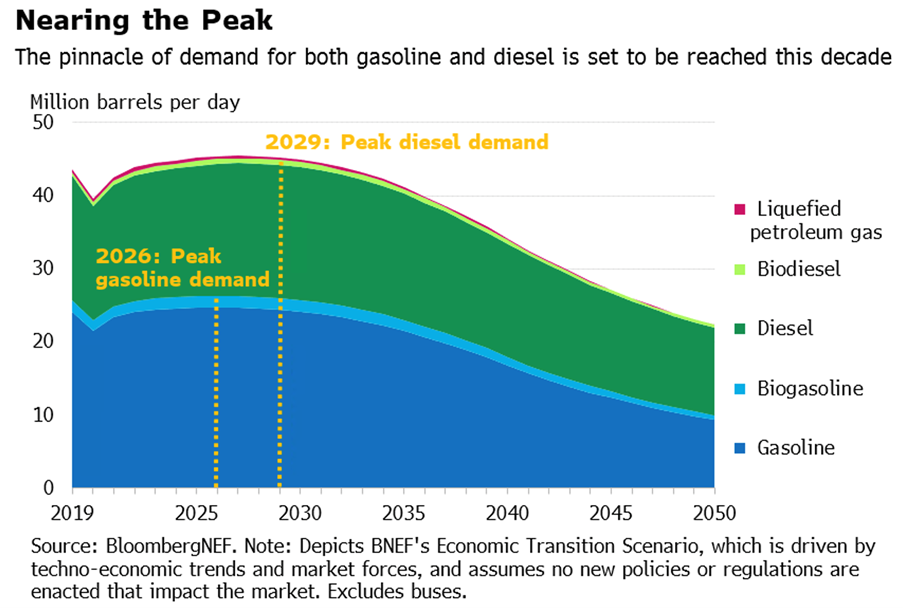 The dilemma for oil refiners is how to balance the positive short-term picture, particularly with the present supply squeeze, and an impending long-term decline.

“Refiners in the US facing pressure to increase gasoline and diesel output will have little incentive to invest in order to plug what, in most opinions, is a short-term supply gap,” says David Doherty, BNEF’s head of global oil demand. “Any structural investment today would face the prospect of competing in a shrinking market in the next five years, particularly in the US and Europe.”

Chinese refiners are expanding their capacity and could capitalize on higher prices overseas if export quotas are increased. Yet Beijing will be conscious of the tension between short-term profits and long-term climate ambitions. Allowing a boom in exports “will compromise China’s plan to consolidate the refining sector and cap emissions from fuels processing,” says Sisi Tang, an oil and petrochemical analyst at BNEF.

So, what is set to drive the decline in demand for road fuels? The immediate instinct is to perhaps credit the rise of electric vehicles. While this will certainly have a big impact in the long term, demand growth this side of 2030 will actually be disrupted more by mandates to improve fuel efficiency, before the uptake of zero-emission vehicles really kicks in.

Still, the proliferation of alternative drivetrains, shared mobility services and autonomous vehicles will have a profound effect on the future of the transport sector. Shared mobility is expected to account for 36% of passenger vehicle kilometers by 2050, of which the overwhelming majority will be powered by EVs. High fuel prices are already spurring some Uber and Lyft drivers to ditch their gasoline guzzling cars for a Tesla. 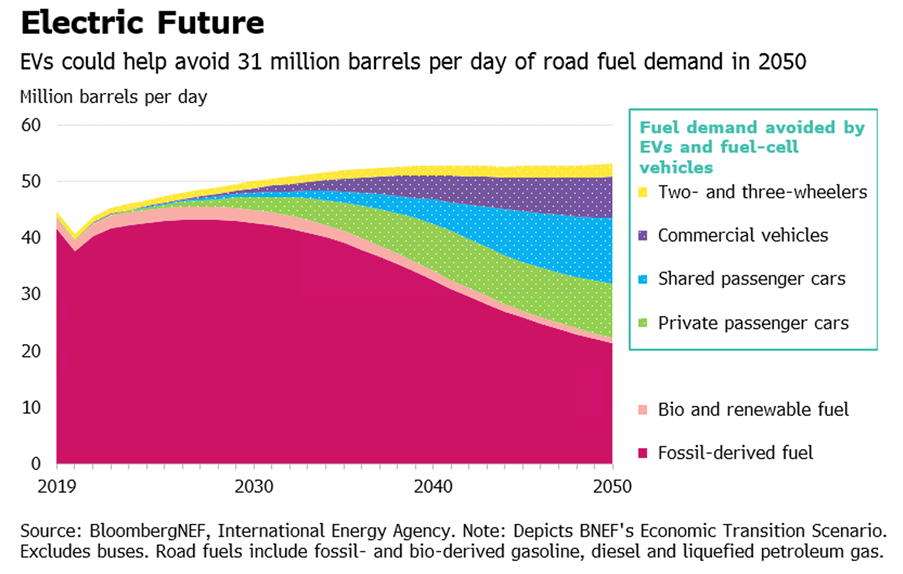 All in all, the switch to electric and fuel-cell vehicles could avoid 31 million barrels per day of road fuel demand in 2050.

3. Passenger cars ahead of the curve as commercial vehicles lag

While overall road fuel demand is forecast to peak in 2027, there are variations across the three main vehicle segments. Demand looks to have already peaked from passenger cars and pretty much plateaued for two- and three-wheelers. 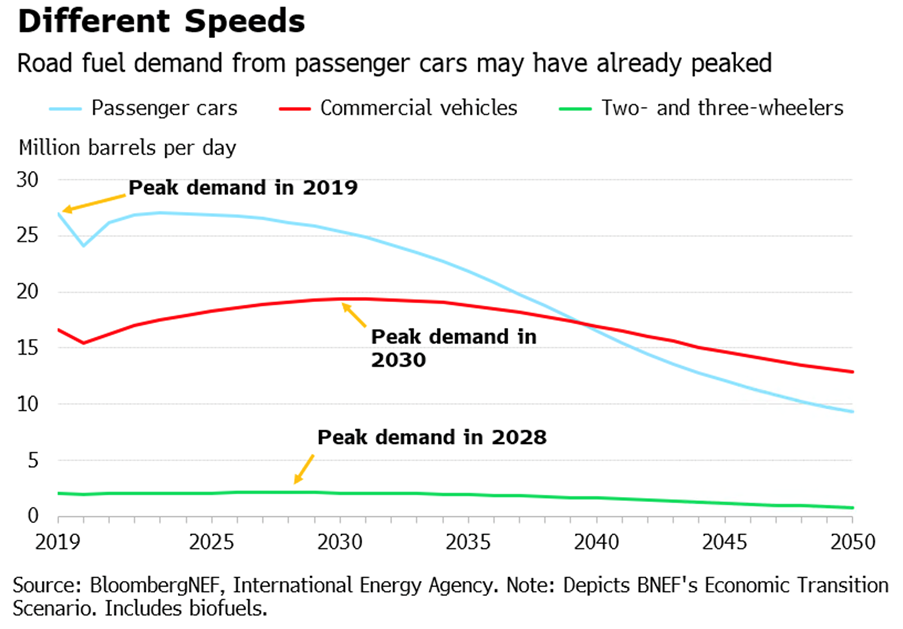 Fossil fuels are set to maintain their hold over commercial trucks for longer, as economic growth boosts the need for vehicles to transport goods, but models with alternative drivetrains are slow to arrive. Peak demand is only seen at the end of the decade in BNEF’s Economic Transition Scenario.

As more corporations with large delivery fleets, such as DHL, Ikea and Amazon, pledge to reach net-zero emissions, this is expected to see sales of electric light trucks take off. However, in the heavy truck segment, while investment from automakers like Daimler and Volkswagen should translate to more electric and fuel-cell options, diesel demand is still estimated to be higher in 2050 than 2021

The rise of EVs has eclipsed biofuels as a solution to decarbonize road transport. While demand for both biogasoline and biodiesel is expected to grow in the near term, the increase will likely be relatively modest, with the use of both peaking this side of 2030. 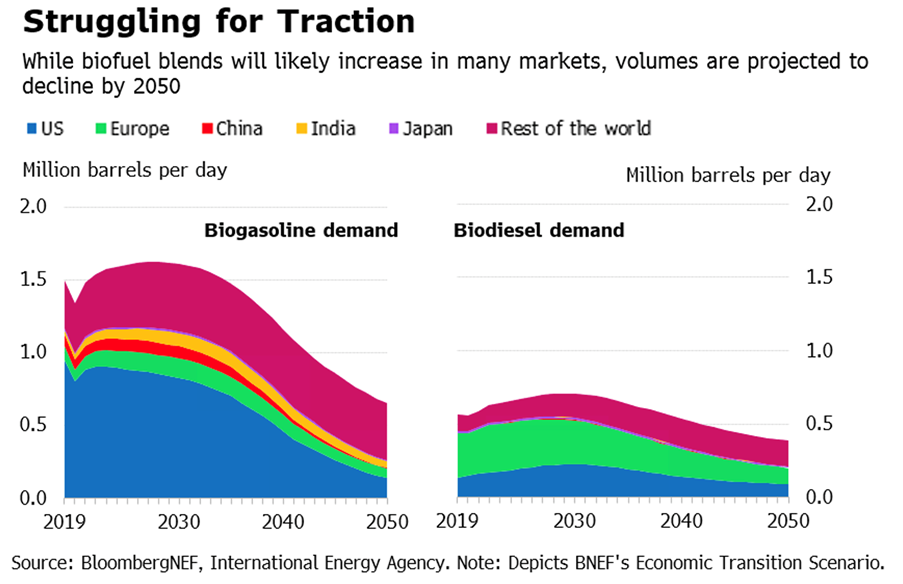 “The blend of ethanol in gasoline will rise moderately over time, led by some nations, like India, pursuing higher blend mandates, and improving availability of higher blends at gas stations in the US,” says Daisy Robinson, head of renewable fuels at BNEF. “However, this increased blending will not be sufficient to counteract the rapid decline in overall gasoline demand, leading to a fall in outright volumes of ethanol demand.”

While the long-term decline of gasoline and diesel is rapidly approaching, the world is nowhere near on track to eliminate fossil fuel use in the road transport sector.

Even with close to 2.4 billion zero-emission vehicles driving around in 2050, demand for road fuels is set to remain above 20 million barrels per day under BNEF’s Economic Transition Scenario. 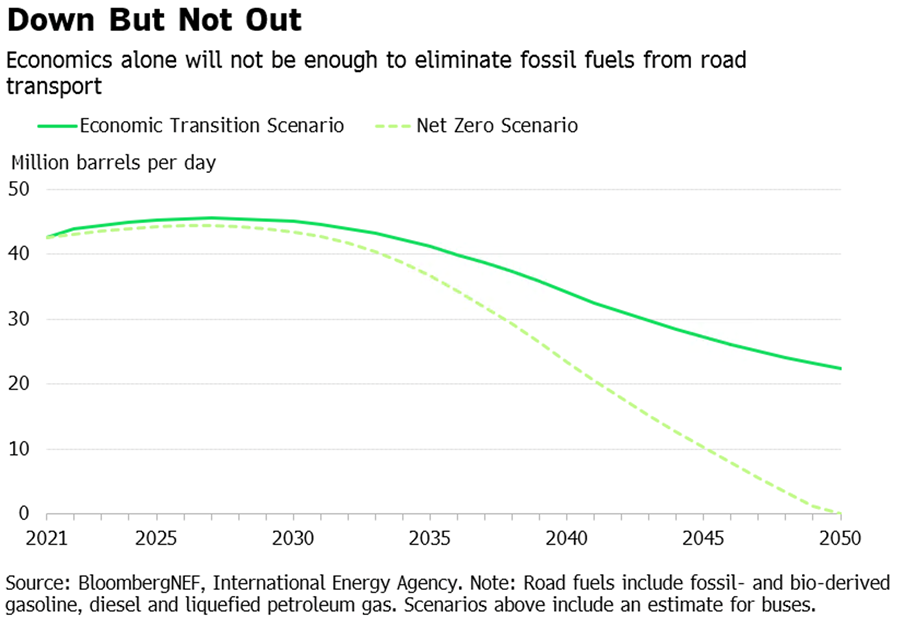 So, how can we get to zero?

“In the absence of an even faster EV revolution, or a breakthrough in technology to help decarbonize heavy trucks, the sector will continue to rely on fossil fuels,” says Doherty. “New technologies like synthetic or e-fuels could close that gap, or a strong push into cleaner fuels like renewable diesel. But costs are a huge impediment for now – each would require the introduction of policy to be competitive.”