Drivers around the world are feeling the strain of higher gasoline prices to fill up their cars. But metals could soon become the new oil in the road transport sector, underpinning the batteries that will power the electric vehicle revolution.

As demand continues to grow, battery producers and automakers are scrambling to secure access to key metals such as lithium and nickel, battling high prices and tight supply.

Here are five charts from BloombergNEF showing the pressures arising from the battery boom.

Total demand for battery metals is forecast to jump by 50% this year to 4.8 million metric tons, and race to over 17.5 million tons by the end of the decade. Demand for lithium is set to grow the fastest, surging more than sevenfold between 2021 and 2030. 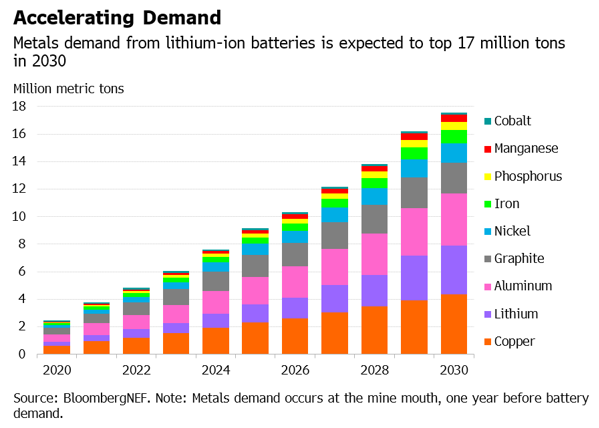 The key question is whether there is sufficient supply to meet booming demand. Battery metals markets are expected to be tight in 2022 as rising demand coincides with inflationary pressures and supply chain constraints. Lithium, nickel and manganese could all see technical supply deficits this year, according to BNEF’s latest Battery Metals Outlook.

Upstream mining capacity is limiting supply for lithium and nickel refineries, while manganese – which is used to make battery cathode precursors – faces challenges from underinvestment in downstream sulfate refining capacity.

2. Trouble ahead for lithium

Lithium, specifically lithium carbonate and lithium hydroxide, is a crucial ingredient in EV batteries, and the silvery-white metal has been getting increasingly expensive.

Raw materials availability is the biggest constraint for the production of lithium carbonate and hydroxide, and the market could face a supply squeeze this year. While risk-adjusted capacity at the mine level is projected to reach around 673,000 tons of lithium carbonate equivalent (LCE) in 2022, demand is forecast to exceed 676,000 tons LCE. The lithium industry could struggle to meet growing demand from EVs unless new projects are ramped up quickly over the next two years. 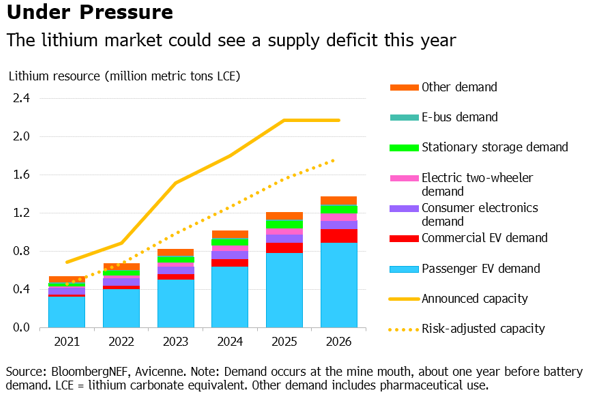 “This year, mined lithium from both spodumenes and brines is likely to trail demand as BNEF sees EV sales reaching record levels,” says Ampofo. “This is likely to sustain the higher prices recorded in the first half of the year.”

Lithium has led an upward charge in battery metals prices, with nickel’s recent ascent reflecting risks to supply from key producer Russia amid the war in Ukraine. Higher commodity costs could send the years-long trend of declining battery prices into reverse.

3. Higher battery costs could delay the tipping point for EVs

The battery is the most expensive component of an electric vehicle, meaning cheaper batteries are key to enabling the shift away from petrol and diesel cars. Battery prices have been falling as growing EV sales enable economies of scale and new cell chemistries improve energy density. While the rate of decline has slowed, prices are edging ever closer to the $100-per-kilowatt-hour mark at which EVs are expected to reach parity with internal combustion engine vehicles on an upfront cost basis. 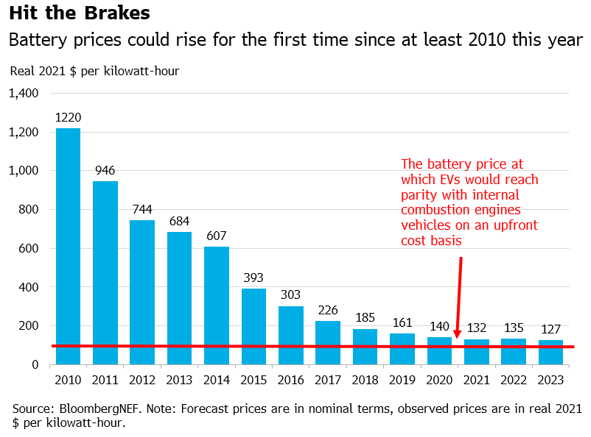 However, there could be a bump in the road this year. Amid rising raw material and component costs, battery prices could increase for the first time since at least 2010. BNEF forecasts the average battery price will climb to $135 per kilowatt-hour in 2022, some 2% higher than a year earlier. If inflationary pressures persist, this could delay the point at which EVs reach the $100-per-kilowatt-hour threshold by two years, to 2026.

As costs go up and supply chain challenges continue, this has translated to more expensive EVs as automakers feel the squeeze. Among others, Tesla, Rivian and GM have all increased the prices of their models this year.

High commodity costs could spur car manufacturers to adjust their battery strategies and opt for cheaper compositions. One such avenue is to substitute cobalt with nickel.

“Cobalt use in lithium-ion batteries has evolved over the last three years as a result of the higher prices recorded in 2018 and the ethical concerns automakers have around supply from artisanal miners in the Democratic Republic of Congo,” says Ampofo. “These concerns have resulted in a shift to less cobalt-intensive battery chemistries, or those without cobalt.” 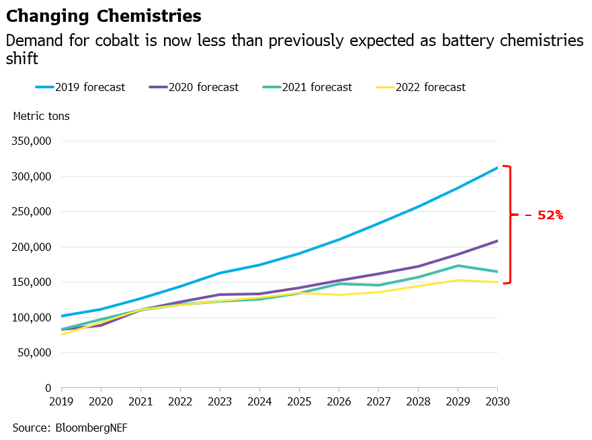 The switch to higher nickel content, as well as the rapid uptake of lithium iron phosphate cells, means less cobalt will be used in batteries than previously anticipated. BNEF’s latest forecast is that cobalt demand will grow by 28% between now and the end of the decade to over 150,000 tons. However, this is less than half what was estimated back in 2019.

China is also a battery manufacturing powerhouse, accounting for almost 75% of total commissioned capacity. Europe and the US are set to make inroads in the market. Tom Jensen, chief executive officer of Norwegian battery startup FREYR, told BNEF earlier this year that he sees Germany, Eastern Europe and the Nordics as the likely regional hubs in Europe. Indeed, Volkswagen recently broke ground on a new battery plant in Germany as the “starting point for a global battery offensive.” 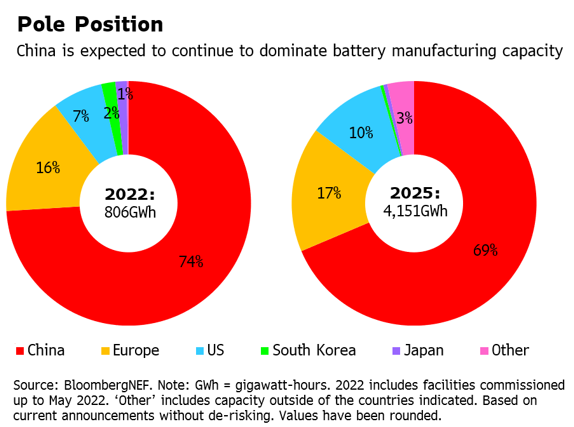 Nonetheless, China is expected to remain in the driving seat, retaining a 69% share of global manufacturing capacity in 2025, according to BNEF.