Commodities markets have been thrown into disarray by Russia’s invasion of Ukraine, ratcheting up inflationary pressure on a global economy already hit by surging costs. Russia is a major supplier of everything from oil and gas to aluminum and nickel, and prices are soaring on fears of potential supply disruptions.

To a certain extent, Russia and its exports have become a pariah over the past two weeks amid the growing risk of doing business in and with a country at the center of a geopolitical storm. But this crisis has also spotlighted the degree to which the world can really afford to turn its back on Russia, raising important questions around energy security and the transition to net-zero emissions.

Russia is the world’s third-largest oil producer behind the U.S. and Saudi Arabia, and the largest exporter. As the war in Ukraine escalates, global oil prices have soared.

Many countries in Europe have been hesitant to directly target Russian energy exports with sanctions given a high degree of dependency on Russia as a supplier. However, the U.S. announced a ban on Russian fossil fuel imports, including oil, on March 8. It was joined by the U.K., which plans to phase in a ban of Russian oil imports over the course of 2022.

Reports that the U.S. was discussing an embargo sent the front-month contract for West Texas Intermediate (WTI) — the U.S. benchmark — close to $130 a barrel on March 6, a level last seen in 2008, while Brent crude topped $137 a barrel on the same day. 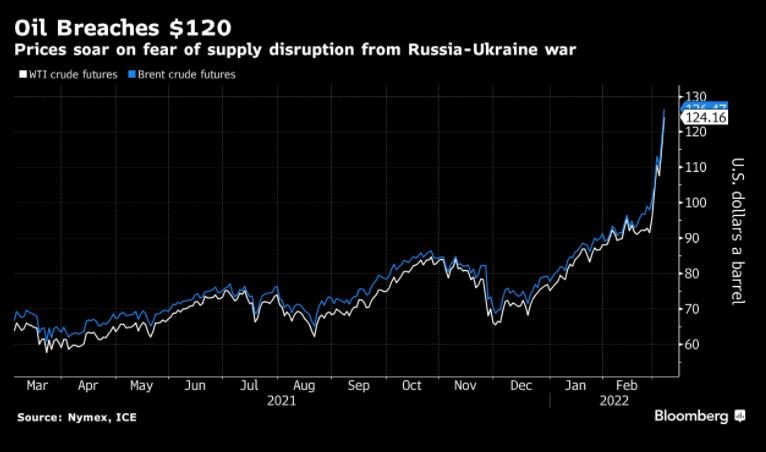 Russian oil is being offered at deep discounts, but that has not stopped refiners, traders and shippers approaching Russian barrels with caution or even ‘self-sanctioning’ for fear of backlash. Oil tanker rates for multiple trade routes have spiked.

If more sanctions end up targeting Russian oil exports, there are limited barrels to fill the gap. BloombergNEF sees upside for a sizable increase in oil output from the Permian Basin, the largest oil producing region in the U.S. However, any expansion in production would take time.

The option to lift sanctions on Iranian oil exports is on the table as well, but Iran’s oil production capacity is only a fraction of Russia’s export volumes and would also take time to ramp up.

European gas and the Russia conundrum

Europe had been wrestling with how to address its dependency on Russian gas well before the invasion of Ukraine. As the market prices in the risk of a reduction in flows from Russia — be it from sanctions or Russia itself cutting off supply — Europe’s benchmark front-month TTF gas price jumped to as high as 335 euros per megawatt hour ($364/MWh) on March 7, and has more than doubled from the start of the year.

In its base case scenario, BNEF estimates that the ‘European perimeter’ — Northwest Europe, Italy and Austria — will end the summer with 55.9 billion cubic meters (Bcm) of gas in storage, or 84% full. However, with uncertainty around winter delivery of Russian gas supply, and no guarantees that liquefied natural gas can bail out the European market as it did this winter, it is unlikely that the market or policy makers will be content with this level of storage.

Should Russian supplies fall by 20% from the base case, perimeter gas stocks would end the summer at around 47Bcm, all things being equal. This would be the same level as in 2021, when, despite the possibility of a Nord Stream 2 startup helping to keep a cap on winter prices, they still ended the month upward of 80 euros/MWh.