Asia and Europe continue to lead global industrial digitalization, with most strategies focusing on AI and advanced manufacturing

South Korea took the top spot in 2020, advancing from third place in BNEF’s 2019 ranking. The move was propelled by policy developments like a national AI strategy and its ‘new deal’ recovery package which set digitalization and green technology as top national priorities. Several pieces of legislation solidified the link between digitalization and sustainability globally in 2020, with leading nations elevating these two imperatives as vital elements for future economic growth.

Digitalization has become a key pillar of government policy as nations globally struggle to prop up Covid-19 impacted economies. Government digital strategy is aimed at boosting industrial competitiveness and building capabilities in key technologies such as artificial intelligence (AI) and the Internet of Things (IoT).

The pandemic also fueled a rise in technology sovereignty and onshoring initiatives. France, Germany and others have committed to building a European cloud to challenge the dominance of American and Chinese technology giants. Japan is paying its high-value goods manufacturers to move production away from China, and South Korea is committing to develop a Korean AI chip.

Manufacturing competitiveness remains the priority for global industrial digital policies – 14 countries announced new initiatives to digitalize manufacturing since last summer. Many governments (14 since the 2019 report) are also digitalizing their power, mining, agriculture and oil sectors with policies and incentives. Saudi Arabia’s national strategy calls for digital technologies to help enable a new logistics industry for the country, helping diversify away from oil and gas. Germany emphasized the importance of digital technologies in realizing its goals of developing a battery cell industry for electric vehicles.

The report details additional themes for national digitalization strategy in 2020, such as new partnership models between corporations and governments, growing standardization in technology regulation, and innovation on managing the labor impact of digitalization.

Claire Curry, BNEF’s head of digital industry, commented: “As the race for industrial digitalization advances, it is essential to learn from the successes and mistakes of others. BNEF’s report analyzes leading initiatives around the world, revealing recent themes and strategy differentiators for the largest world economies. The analysis can inform digital strategy for policymakers, industrial companies and technology providers alike.” 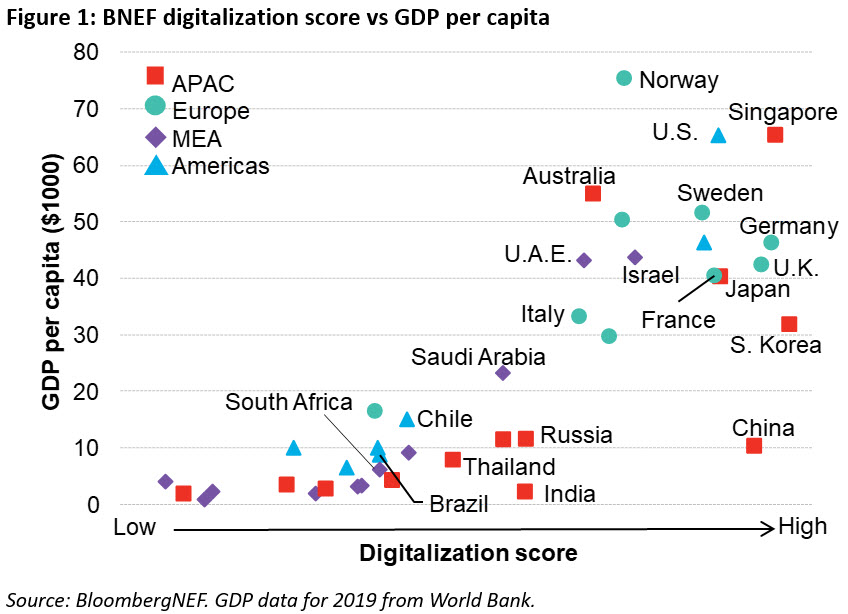