A $12 billion tax-equity tool that U.S. wind and solar developers depend on to finance projects appears likely to remain largely intact as part of the sweeping reform that Republicans were negotiating Thursday.

A tentative compromise would preserve most, but likely not all, of the value of renewable energy tax credits that developers sell to JPMorgan Chase & Co., Bank of America Corp. and other large financial institutions, said Senator John Thune, the chamber’s No. 3 Republican. Those credits are threatened by a provision in the Senate bill that would impose a minimum tax on foreign transactions, reducing the need for companies to buy credits.

Selling tax credits is a critical funding source for clean energy. The two biggest U.S. solar companies, First Solar Inc. and SunPower Corp., are counting on closing such deals by the end of the year to finance projects, said Jeffrey Osborne, an analyst at Cowen & Co. If left unchanged, the minimum tax on foreign transactions — called the Base Erosion Anti-Abuse Tax, or BEAT — would make that harder.

“It’s a fix that I think everybody in the end can live with, and will allow the credits that have been used to finance these projects to continue to be used to finance these projects,” said Thune, one of the negotiators hammering out the differences between the House and Senate bills. “We were going to make sure the wind industry, for example, wasn’t adversely impacted.”

SunPower, which Osborne expects has the most to gain from clarity over the tax provision, rose 4.7 percent to $8.99 at the close in New York.

“The uncertainty over the past few weeks has delayed financial close of many projects,” Osborne said in an interview. “Now that there’s certainty evolving, we expect a flurry of activity into year end.” 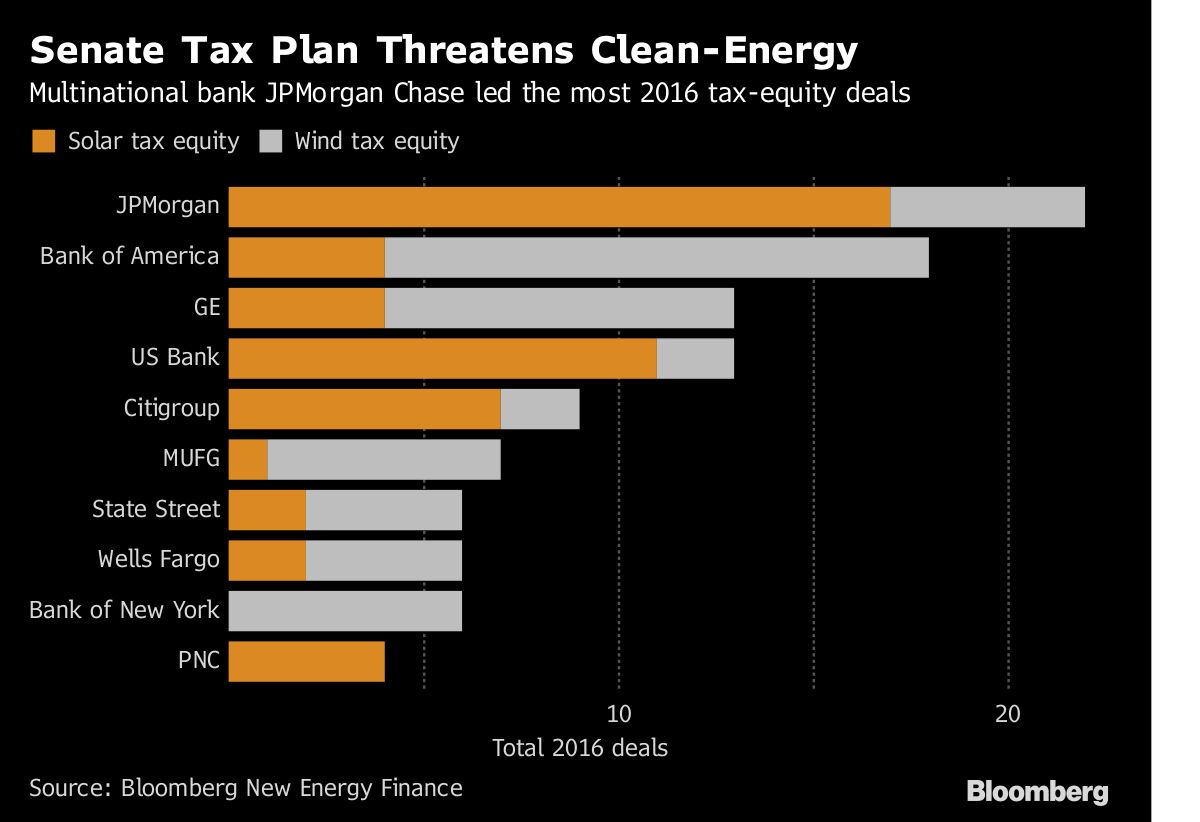 Major financial companies told groups including the American Council on Renewable Energy that they would no longer participate in tax-equity financing if the measure from the Senate bill was adopted, Greg Wetstone, the Washington-based group’s president, said in an email.

In addition, Thune said the $1.5 trillion tax legislation, expected to receive votes in both chambers of Congress next week, preserves a phase-out of tax incentives for both the solar and wind industries that was passed as part of a 2015 bill that also lifted the 40-year-old ban on U.S. crude oil exports.

The jobs created by wind and solar in recent years played a key role in the compromise, said Senator Cory Gardner, a Colorado Republican.

“There are tens of thousands of jobs on the line,” Gardner said in an interview. “If we get it right, it will continue to add to that opportunity to grow jobs in renewable energy and beyond — and if not it will do harm to an industry that’s just now really hitting its stride.”

Tax credits for fuel cells, small wind and geothermal heat pumps, which were left out of that 2015 legislation, will again be omitted. Thune said those credits may be dealt with in a subsequent “tax extenders” package. But it’s unclear that Congress will have the time or inclination to pass that legislation.

“Deferring consideration of the tax credits for fuel cells and other energy ‘orphans’ may have been necessary to get a tax bill finished on schedule,” said Stephen Munro, an analyst at Bloomberg New Energy Finance. “Based on recent history, I’m skeptical they will be reinstated.”

Also excluded from the final bill is the extension of a tax credit for new nuclear production that had been included in the House’s bill, according to a Republican familiar with the process. That credit, which may go unused before a 2021 deadline, would benefit Southern Co.’s delayed Vogtle project in Georgia.