President Donald Trump may have quit the Paris climate accord, but shareholders aren’t going to let carbon-producing U.S. ­companies off the hook. Witness the investor victory over Exxon ­Mobil Corp. management on May 31, a day before the Trump decision.

Over the Exxon board’s objections, almost two-thirds of shareholders voted for a proposal asking the company to provide a detailed report on how curbing climate change could affect its business. Leading the charge was the giant New York State Common Retirement Fund, which manages $192 billion and is a veteran activist. Its partner was a far smaller and lower-profile newcomer taking one of its first public stands in the U.S.: the Church of England.

Through a £7.9 billion ($10 billion) fund that finances the church’s mission activities, cathedral costs, and clergy pensions, the church has been quietly—and successfully—engaging with European companies in the energy and mining industries for the past few years. BP, BHP Billiton, and Royal Dutch Shell have all voluntarily adopted similar climate change steps to those sought at Exxon.

“We see ourselves as active, rather than activist,” says ­Edward Mason, head of responsible investment at Church Commissioners for England, as the fund is formally known. The Church of England, also known as the Anglican Church, is the state church of England. Christianity came to the country during Roman times, but the church split from Rome in the 16th century under King Henry VIII. Like many socially responsible investors, the church today prefers to engage collaboratively with companies rather than resort to a public brawl.

Exxon, though, has resisted, asking the U.S. Securities and ­Exchange Commission for permission to keep the proposal off its proxy two years in a row, which the SEC denied. Exxon argued that its current processes were sufficient to test its holdings for risk. Last year when Rex Tillerson, now U.S. secretary of state, was Exxon’s chief executive officer, the proposal got 38 percent of votes.

The Church of England rallied dozens of U.S. religious ­investors—from the Maryknoll Sisters to the Unitarian Universalist Association—to back the Exxon shareholder resolution, along with giant ­institutions such as Hermes Investment Management, AXA Investment ­Managers, and CalPERS. It won 62.1 percent of the vote. Exxon’s board will now reconsider its opposition to the measure.

“It was an incredible watershed moment,” says Natasha Lamb, director for equity research and shareholder engagement at­ ­Boston-based Arjuna Capital. “They got this whole European ­coalition together,” she says. “The Church of England pulls a lot of weight.”

Sister Patricia Daly, director emeritus of the Tri-State ­Coalition for ­Responsible Investment, based in Montclair, N.J., agrees. “It was great to have them front and center,” says Daly, who’s ­engaged with Exxon on environmental issues for years. “They helped push the needle and gave new impetus to shareholders and not only faith-based ones.”

The church’s ability to enlist backing from giant institutions such as BlackRock Inc. was crucial to passing the resolution, says Gregory Elders, an analyst for Bloomberg Intelligence. “They push mainstream responsible-investing views,” he says. “It’s not preachy.”

“This is a vital ethical issue and relates to our stewardship of the environment and our care for the poorest and most ­vulnerable in the world, who will be those most impacted by climate change,” Mason says. The Church of England fund is a signatory to the Principles for ­Responsible Investment, which are backed by the ­United Nations.

U.S. religious groups and socially responsible investors who together manage more than $200 billion are focused on ­climate change, according to the Interfaith Center on Corporate Responsibility. It’s the single largest category of proposals filed by ­religious groups and last year accounted for 66 of 283 resolutions, ­according to ICCR data.

The church has a long history of activism on climate. In a 2015 op-ed in the New York Times, Archbishop of ­Canterbury Justin Welby, a former oil industry executive, described how the church started taking a faith-based stance on protecting the environment in the 1980s. The issue got particular attention after Pope Francis put out an encyclical two years ago saying the earth “cries out to us because of the harm we have inflicted on her by our irresponsible use and abuse of the goods with which God has endowed her.”

It’s also a smart investment. “Climate change is one of those issues that combines an ethical dimension with a risk-and-­opportunity dimension,” Mason says. The church got consulting firm Mercer to assess its portfolio for climate change risk in 2015; last year it adopted a climate change policy. The fund has reduced risk by ­divesting from coal and oil sands and now has more than 4 percent of its portfolio in low-carbon investments, Mason says. 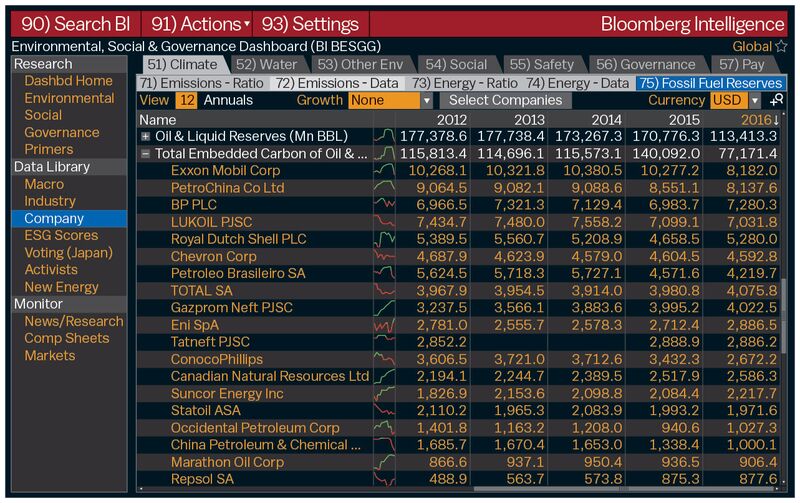 The policy appears to be producing results. Last year the fund returned 17.1 percent; over the past 30 years its diversified portfolio has averaged 9.6 percent annually, or 6.3 percentage points above inflation. Its objective is to return at least 5 percentage points above retail price inflation for the entire portfolio, which consists of about 30 percent equities, including 19.3 percent in global stocks such as Exxon.

Real estate produced a relatively weaker 11.6 percent return. But among the church’s real estate investments are climate-­friendly projects such as a 5-megawatt solar farm that powers 1,200 homes near Carlisle, England, close to the Scottish border.

The environment isn’t the only area where the church tries to enforce values through its investments. It excludes investment in companies that make, sell, or engage in weapons, pornography, tobacco, gambling, high-interest-rate lending, human embryonic cloning, thermal coal, and oil sands. And it has responsible ­marketing standards that companies selling alcohol must meet.

It also tries to engage with companies as individual cases come up. After Rupert Murdoch’s News Corp. was embroiled in a phone-hacking scandal in 2011, the church sold its shares in the media conglomerate. And it sold its stake in mining company ­Vedanta ­Resources Plc because of concerns about how the company’s operations were affecting local communities where it ­operates in India.

The church is also trying to make sure its own house is in order. It disclosed in August that its female employees earn on average 27 percent less than its male employees. Women predominate in lower-paid jobs, while the reverse is true at upper-pay levels, the data show. “We have more work to do,” a spokesman says, adding that the church is reviewing its evaluation-and-pay ­methodology as well as trying to recruit more diverse candidates.

Last year it began voting against directors at the 350 largest British companies whose boards were less than 25 percent ­women. Diversity, too, is part of the church’s remit, says Adam ­Matthews, head of engagement for Church Commissioners. “As an investor, board diversity is important to us,” Matthews says. “Not only is it a simple matter of fairness, but gender diversity leads to better decision-making.”

Colby is a senior reporter at Bloomberg News in New York.

This story appears in the forthcoming issue of Bloomberg Markets.