Natural gas is about to get a glimpse of its future role in the U.S. power mix as solar energy’s backup.

During the upcoming Aug. 21 eclipse, operators of giant solar fields from California to the Carolinas will rely on power from fast-start natural gas generators as well as hydroelectric plants and other sources to fill the gaps as the sky darkens. The celestial event, the first total solar eclipse visible in the lower 48 states since 1979, will provide owners of gas turbines a chance to shine even as the fossil-fuel is expected to be displaced over time by solar and wind energy.

The eclipse comes as the U.S. power grid undergoes a transformation that will bring increasing amounts of flexible resources needed to complement growing supplies of solar and wind energy. Solar installations have grown ninefold since 2012 and renewable sources are forecast to supply just as much of America’s electricity demand as gas by 2040, according to Bloomberg New Energy Finance.

The “electric grid of tomorrow” will increasingly have to deal with fluctuating power supplies from the wind and sun while incorporating quick-start gas turbines during events like the upcoming eclipse, said Stephen Berberich, president of California ISO, the state’s grid operator. Operators will also use new technologies to control demand when the moon will completely block the sun along a 70-mile-wide (113-kilometer) corridor stretching from Oregon to South Carolina. 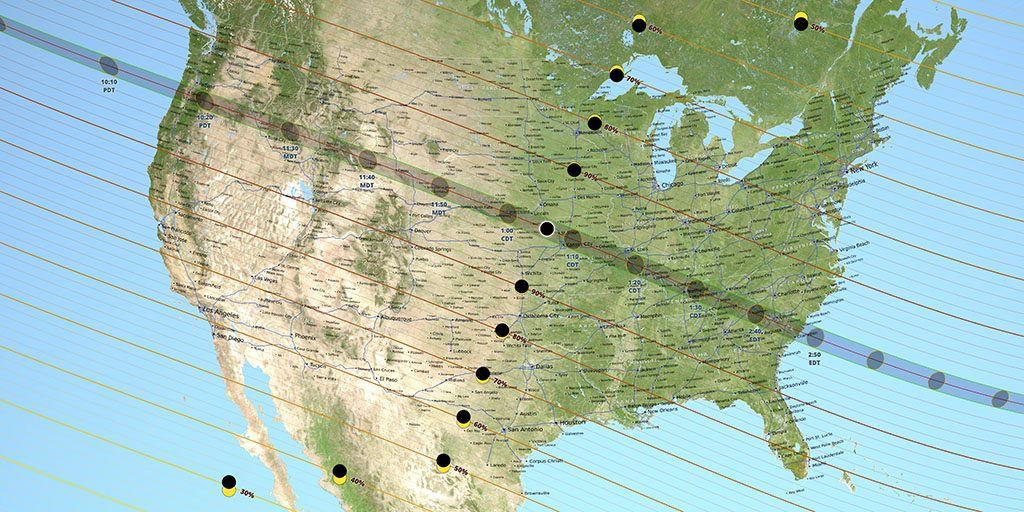 A map of the United States showing the path of totality for the August 21, 2017 total solar eclipse.

Based on a Bloomberg calculation of grid forecasts, more than 9,000 megawatts of solar power may go down. That’s the equivalent of about nine nuclear reactors.

To help keep the lights on, the California Independent System Operator will tap the state’s network of gas generators and hydroelectric dams to make up for the loss of about 6 gigawatts of solar output over three hours. Duke Energy Corp. said it will utilize gas generators in North Carolina, the biggest solar state after California, to make up for output that is expected to sink 92 percent to about 200 megawatts in 90 minutes.

The North American Electric Reliability Corporation doesn’t foresee any reliability issues as grid operators have been planning for the eclipse for months.

“Given that the timing and path of the eclipse are well understood and well reflected in solar generation forecasts by CAISO and other grid operators, generation dispatch or curtailment would be managed as a part of routine operations,” said Steve Krum, a spokesman for First Solar Inc., the largest operator of solar plants in the U.S.

AutoGrid Systems Inc. says some utilities will be using its software systems to shut off unnecessary appliances during the height of the eclipse, and bring them on slowly as solar power returns, said Adam Todorski, a director of product technology for the Palo Alto, California-based company.

“It’s a lot like a planned outage; you know it’s coming,” Todorski said. “You can get hundreds of megawatts by shedding things like water heaters and pool pumps, and heat pumps.”

Demand for gas is forecast to stop growing in the U.S. by 2040 as new technologies such as battery storage ramp up to provide backup for wind and solar, according to Bloomberg New Energy Finance.

During a March, 2015 eclipse that crossed Europe, German grid operator TenneT TSO GmbH brought on 8 gigawatts of generating capacity to compensate for the loss of solar power as the sun disappeared, double the usual amount. It also kept hydropower plants that can store energy on standby and coordinated its flows with neighboring grid operators.

Power prices in Germany’s wholesale market surged then dipped for a short time as the first eclipse of the emerging solar age passed, briefly switching off thousands of panels that on the brightest days provide 40 percent of Germany’s power.

In the U.S., which will have another full eclipse in 2024, gas will continue to provide a backstop to solar until battery storage becomes cheaper and more widespread. Until then, regulators are urging consumers to pledge to cut consumption during the hours of the eclipse.

“We have plenty of wind, geothermal, hydro, and natural gas to make sure the grid runs smoothly during the solar eclipse, but we also have a lot of Californians who want to do their California thing and step in to help replace the sun when it takes a break,” said California Public Utilities Commission President Michael Picker.