The Electric Car Revolution Is Accelerating

The Bloomberg New Energy Finance forecast says adoption of emission-free vehicles will happen more quickly than previously estimated because the cost of building cars is falling so fast. The seismic shift will see cars with a plug account for a third of the global auto fleet by 2040 and displace about 8 million barrels a day of oil production  — more than the 7 million barrels Saudi Arabia exports today.

“This is economics, pure and simple economics,” BNEF’s lead advanced-transportation analyst Colin McKerracher said before forecasts were published on Thursday. “Lithium-ion battery prices are going to come down sooner and faster than most other people expect.” 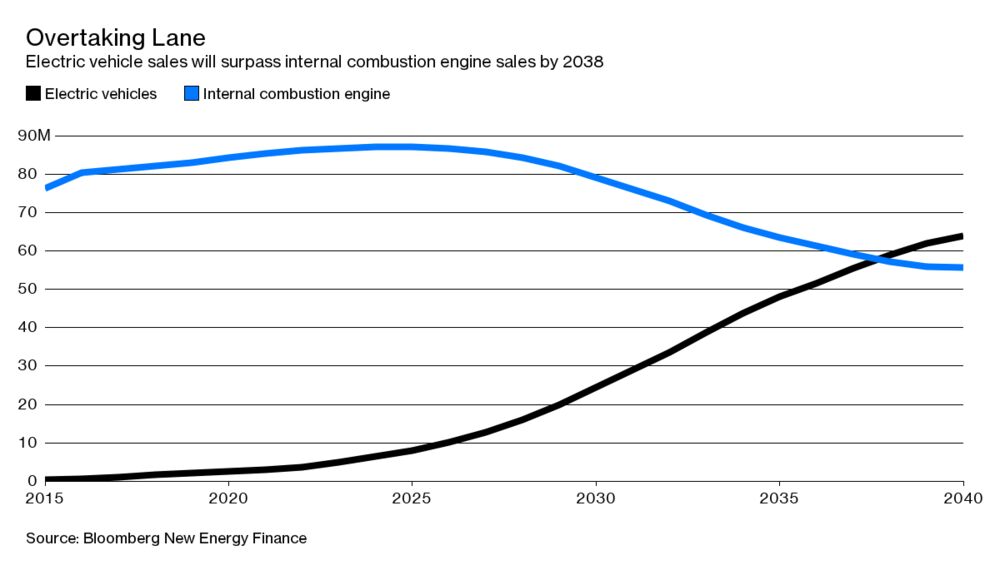 The forecast is BNEF’s most bullish to date and is more aggressive than projections made by the International Energy Agency. Surging investment in lithium-ion batteries, higher manufacturing capacity at companies including Tesla Inc. and Nissan Motor Co., as well as emerging consumer demand from China to Europe support BNEF’s projections, which also include:

Lithium-ion cell costs have already fallen by 73 percent since 2010 and BNEF predicts innovation of battery manufacturers will accelerate and lead to further steep declines in average prices over the next two decades. While they won’t fall as fast as solar panels, it could still lead to suppliers getting squeezed as they compete for contracts, McKerracher said. 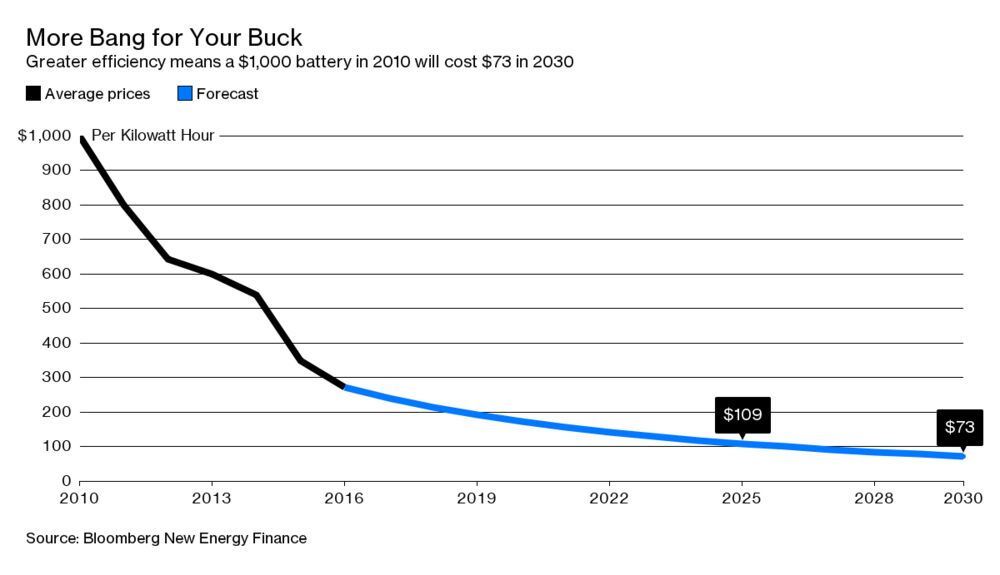 “There’s an element of competitive dynamics and a real possibility of oversupply in the lithium ion battery market that will serve to hammer down prices,” he said.

The world may need the equivalent of 35 of the so-called Gigafactories like the one built by Tesla founder Elon Musk in Nevada over the next 13 years to meet the power demands of electric cars, according to BNEF.

The global shift toward electric vehicles will create upheaval for the auto industry: from oil majors harmed by reduced gasoline demand to spark plug and fuel injection manufacturers whose products aren’t needed by plug-in cars. BNEF, which last year forecast as much as 13 million barrels of oil a day displaced by electric cars, said its revised 8 million barrel a day figure is “likely understated.”
While traditional car suppliers may be hurt by EV growth, some commodities will get a lift, according to BNEF:

It’s the world’s biggest economies — China, the U.S. and Europe — that will drive demand for battery powered cars over the next 25 years, according to BNEF. These governments which have already been the most advanced in providing subsidies and installing charging points, will reap the benefits sooner than other emerging economies like India.

“Electric cars are intrinsically cheaper than gas or oil fuelled cars because they’re simpler and their maintenance is a lot easier,” said Enel SpA Chief Executive Officer Francesco Starace said in an interview in Rome.

In Europe, almost 67 percent of new cars sold will be electrified in 2040, and 58 percent of sales in the U.S. and 51 percent in China, BNEF said. Though there’s  uncertainty in the U.S., where President Donald Trump could dramatically disrupt electric vehicle growth by withdrawing support for the technology in the world’s second biggest car market.

“The next 6 to 8 years become really critical,” McKerracher said. “If those volume amounts falter dramatically, then some of those cost reductions may not come to pass and that will affect the crossover point and therefore the overall adoption level.”

Why Electric Cars May Dominate the Auto Market by 2040