The Gas Tankers Lurking at Sea Looking for a Better Deal

When the tanker Provalys left Louisiana for Chile last month with a full load of U.S. liquefied natural gas, it sailed around South America instead of taking a shortcut through the expanded Panama Canal. Not only may the route be cheaper without canal transit fees, but advances in technology mean less of the fuel would end up lost at sea during the journey.

Gas is frozen into liquid for transport over long distances without pipelines, allowing surplus American reserves to be shipped to high-demand regions like Asia. Trouble is, some LNG evaporates on the voyage. A new generation of ships is reducing such losses, giving traders more flexibility to choose the scenic route in search of the highest prices.

Once a regional commodity, natural gas is becoming global. As new LNG export plants pop up from the U.S. to Australia, a glut has emerged and ships are becoming more than just transporters. They allow fuel to be stored until demand rises or a scheduled delivery window arrives. Oil markets have operated that way for decades, but it’s new for natural gas, which was historically dominated by long-term contracts to specific destinations.

“People use vessels more as trading vehicles,” said Paul Wogan, chief executive officer at shipowner GasLog Ltd. “And once you can get the newer ships out, you can use them almost as storage vessels” because improved insulation keeps the LNG in its liquid state for longer, he said. 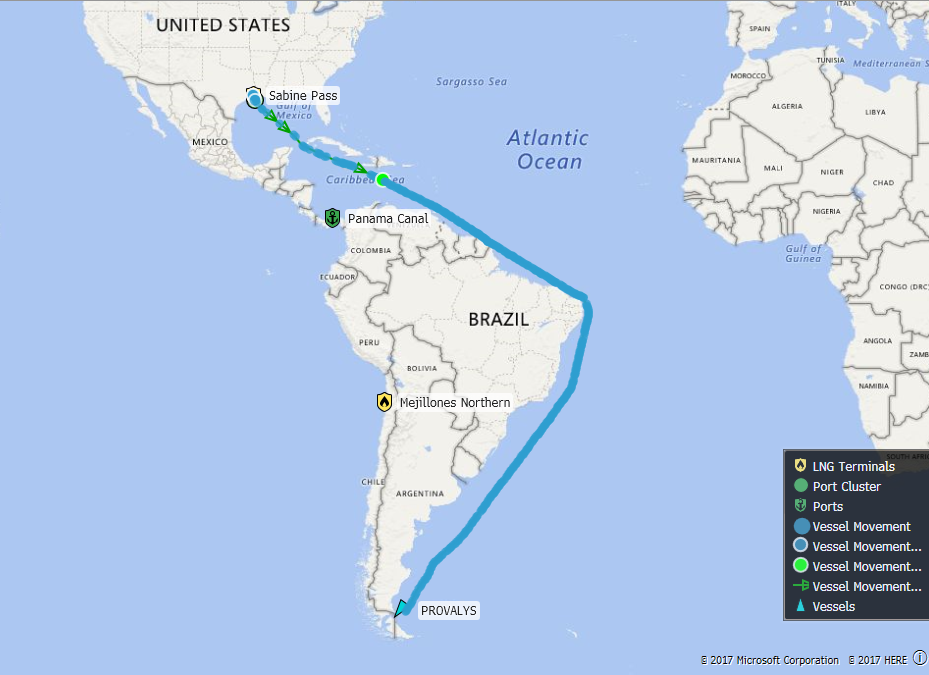 New vessels allow for longer voyages because their rates of boil-off, or LNG evaporation, are about 0.1 percent, compared with 0.15 percent a decade ago, according to GasLog’s Wogan. Ships built from this year on will bring the rate down even more, he said.

The average distance for cargoes from the U.S., which have traveled as far as Thailand, has reached 7,500 nautical miles, about double the global long-term average, according to Wogan. The average voyage speed from Louisiana’s Sabine Pass terminal — the first to ship U.S. shale gas — has been 14.3 knots, compared with an average of 16 to 17 knots for other tankers over the past few years, he said.

The Provalys is due to arrive at Chile’s Mejillones terminal Aug. 25, making the journey via Cape Horn, according to ship-tracking data on Bloomberg. An alternative route through the expanded Panama Canal would have seen it arrive about two weeks earlier and would have required paying tolls and securing a slot.

“The Panama Canal tolls are very expensive in relation to the current market freight rates, and LNG prices as well as fuel prices,” said Emilie Menard, a spokeswoman at Engie SA, which owns Provalys. “It is sometimes more attractive to travel the longer distance.”

The ship was delivered in 2006 and was one of the most efficient of her kind at the time.

Since the start of the year, four ships from Sabine Pass and nine vessels from Qatar, the biggest LNG producer, took longer routes to deliver their cargoes, according to Kpler SAS, a Paris-based ship tracker. Qatari vessels sometimes opt to go via the Cape of Good Hope instead of taking a quicker path through the Suez Canal, and the Symphonic Breeze with a cargo from Trinidad and Tobago, is taking a month-long trip around the cape to China.

The Provalys’s longer journey to Chile would increase shipping costs by about 10 cents per million British thermal units, or $350,000, at current freight rates, according to Sofia Kiriukhina, a market analyst at Kpler. But that may not matter to gas buyers like Engie and Royal Dutch Shell Plc, who often consider their long-term vessel charters a sunk cost. Thus, they’re less concerned about making a speedy delivery and releasing the vessel from charter, she said.

Shell, one of the buyers of Sabine Pass LNG, declined to comment.

Because U.S. LNG isn’t contractually bound for a specific destination — a departure from traditional contracts — ships carrying the nation’s gas can be diverted en route to get a better deal. Still most cargoes are sold to a particular buyer before they’re loaded, Cheniere’s Bensaude said.

“These vessels have been built in anticipation of the requirement to go at much slower speed,” Wogan said.