As the world continues to grapple with its plastic waste crisis, BloombergNEF’s annual Circular Economy Ranking reveals the companies that are leading the charge to develop more sustainable packaging and those that are falling behind.

Based on their strategies and ambition to transition to a circular economy, Colgate-Palmolive, Coca-Cola and Pepsi are the top three brand owners, while Borealis, Braskem and Dow are at the front of the pack among plastic producers. 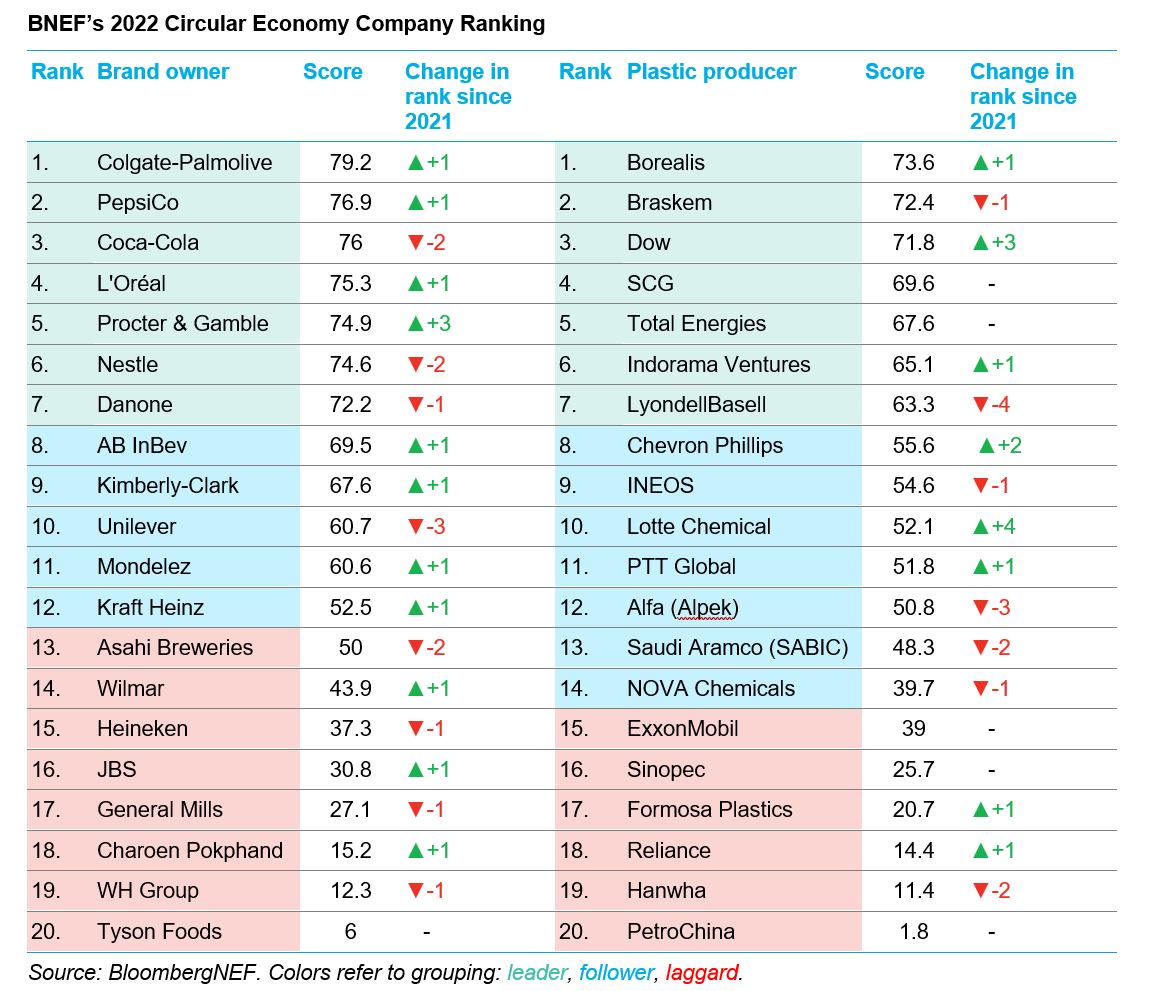 BNEF has once again assessed 40 companies in total, comprising 20 brand owners and 20 plastic producers. Some 35 of these firms now have net-zero emissions targets, with Oreo maker Mondelez, brewing giant AB InBev, and oil major ExxonMobil among those announcing new commitments since late 2021.

Both brand owners and plastic producers are split into three tiers: leaders, followers and laggards. Leading companies are making incremental progress towards their circular economy goals. At the same time, many firms are setting new targets, allowing them to leapfrog some of the original circular economy stalwarts.

Companies that moved up in the ranking include:

Companies that moved down in the ranking include:

Brand owners’ progress is slow and targets could be stronger

Scores at the top of the ranking for brand owners are tight, with only a few percentage points between the leading companies. Still, overall, brand owners have room to do more and set stronger targets.

The circularity efforts of companies in the second tier, known as followers, are mostly being driven by consumer demand for sustainable packaging or policy. The laggards in the third tier have made few announcements or changes since 2021, with the likes of Kraft Heinz and Heineken yet to set absolute packaging reduction targets or recycled content goals.

The leading brand owners have been pushing the circular economy agenda for some time and are actively increasing the use of materials that have been recycled after consumers have finished with them – so called post-consumer recycled, or PCR content. For example, L’Oréal’s PCR plastic content increased from 15% to 21% in 2021 and it is aiming to reach 100% by the end of the decade.

Recycled content targets are among the most difficult to achieve and have the highest weighting in BNEF’s ranking as they require companies to work with their supply chains to source materials and change packaging formulations. Government policy is helping to drive progress, with the UK’s plastic packaging tax likely a key factor in Mondelez now using up to 30% recycled plastic for certain Cadbury chocolate packaging. Brand owners will be forced to increase the circularity of their packaging globally as more countries follow suit with mandatory recycled content policies.

Efforts to improve product design to reduce packaging and increase recyclability have been expanding. Out of the 20 brand owners reviewed by BNEF, 17 have set targets for 100% recyclable, reusable and compostable packaging by 2025 or 2030.

Creating recyclable packaging is only the first step to recyclability, however – a hurdle that Colgate has encountered as many material sorting centers in the US reject the recyclable toothpaste tube it launched last year. Detailed and broadly applied standards for ‘recyclability’ could help avoid these bottlenecks. Such criteria are expected to be set out by the European Commission as part of a proposal that aims to make all packaging recyclable in the European Union by 2030.

Borealis pipped Braskem for the number one spot among plastic producers this year, having revised its renewable and recycled production targets dramatically. Still, Braskem remains the only plastics producer ranked that is not expanding the manufacture of virgin plastic.

Each of the top tier companies have both bio-based and recycled products planned and are expanding their recycling capacity. While most plastic producers classed as ‘followers’ have some chemical recycling capacity, be it in the planning or pilot stage, only a few have commercialized their chemically recycled plastic. This second tier has grown as Lotte Chemical, PTT Global and Nova Chemicals moved up the ranking driven by new partnerships and target announcements.

The group of laggard companies is much smaller compared to BNEF’s previous ranking. ExxonMobil, Hanwha and Saudi Aramco announced net-zero targets, bumping up their scores. Meanwhile, PetroChina moved from a negative to positive score after forming a joint venture with Ineos to supply recycled material for a circular product, although the company still sits in last position due its limited data disclosure. 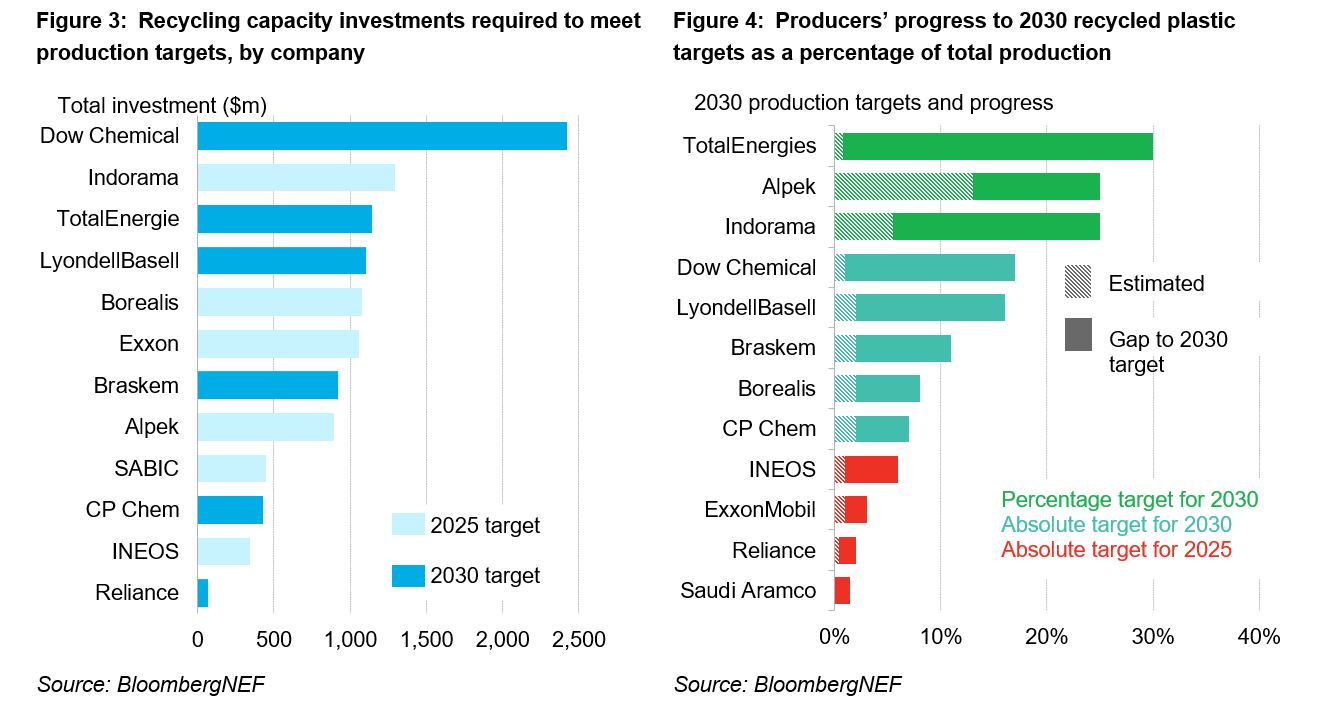 Investment in better waste collection and sorting will be crucial

Of the 20 plastics producers reviewed by BNEF, 14 have set recycled and renewable production targets. However, they must first find the plastic waste to feed their plants. To maximize the future supply of secondary materials, plastic producers must invest in advanced collection and sorting, especially in regions where investment has been lacking.

Industry partnerships and collaboration will be vital to helping plastics producers reach their targets. A number of them have joined the Alliance to End Plastic Waste, a non-profit industry organization founded by BASF, Chevron Phillips Chemical, ExxonMobil and Dow, among others. Members of the alliance contribute to building out the required infrastructure to collect and recycle millions of tons of plastic waste.