The U.S. is the world’s largest biofuels market. Bolstered by more than a decade of supportive policy, almost one in every ten barrels of road fuel consumed in the U.S. is biofuel. Yet the growth potential of conventional biofuels is limited, and there is a growing need for biofuel producers and policymakers alike to adapt to changing demand dynamics. Biofuels can contribute to the decarbonization pathway for hard-to-abate sectors such as aviation.

BloombergNEF’s ‘U.S. Biofuels Outlook’ analyzes the key themes shaping the outlook for biofuels for road use and otherwise.

Currently, almost all biofuels are consumed on roads. They are blended into conventional road fuels, gasoline and diesel, and so their demand outlooks are linked to these fuels. BloombergNEF’s ‘2020 Road Fuel Outlook’ finds that U.S. gasoline demand is already in decline and diesel demand will peak in 2023. This is due to improving fuel economy and increased uptake of alternative drive trains like electric vehicles.  You can read more on BloombergNEF’s ‘2020 Road Fuel Outlook’ here. 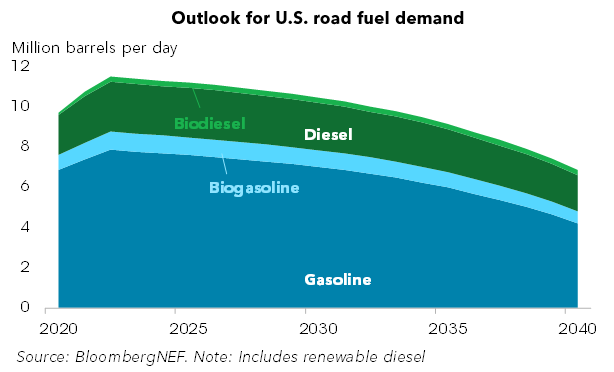 This creates a serious challenge for biofuels. The rate at which they are blended into fossil fuels must rise sufficiently in order for their total use to continue to increase in the face of declining overall road fuel demand. However, there is a limit to how much conventional biofuel can be blended into fossil fuels without placing potential risk on a vehicle engine.

This is particularly the case for ethanol. A blend wall of 10% has long been considered the maximum blend rate for conventional engines. That said, the majority of new cars now have automaker approval to use E15, a blend of 15% ethanol. As such, we expect the blend of ethanol in gasoline to increase moderately from 10% to 12.3% by 2040. Yet this is not enough to keep outright demand from falling. Three scenarios illustrate this. 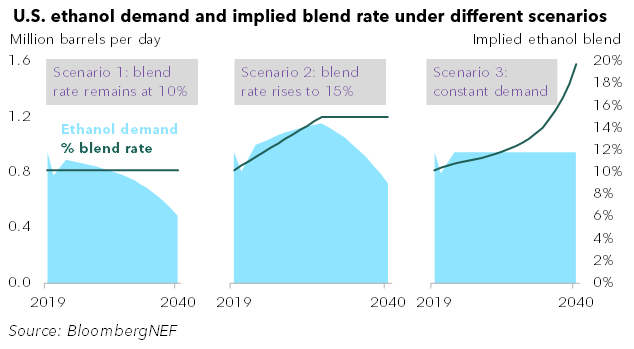 The outlook for biofuels in the diesel pool is more optimistic. BloombergNEF expects the implied blend rate to increase from 5% to 13% in 2040 and to expand rapidly over the next two years thanks to supportive policy. Unlike ethanol, the rise in bio-based diesel blending is sufficient to keep demand increasing even after overall diesel demand peaks in 2023, albeit at a much slower rate. This is in large part thanks to the growth of renewable diesel, an advanced biofuel which is so similar to diesel that it can be used as a like-for-like replacement, so is not constrained by blending limits. Several major projects are due to come online between now and 2024, which will boost U.S. production capacity by 500%. 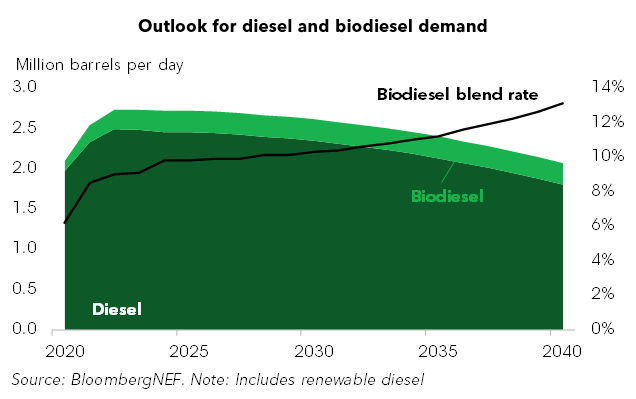 Renewable diesel has the potential to be used in applications beyond road transport in hard-to-abate sectors, such as aviation and marine. These sectors are in direct competition with one another for the available supply of renewable fuel.

Policy is a key driver of biofuels markets but has long been focused on road transport. However, this is beginning to change; renewable jet fuel was recently added to the U.S. Renewable Fuel Standard and to California’s own state-level policy, although on an opt-in basis. Yet incentives remain skewed in favor of on-road biofuels. Renewable fuel used on the road generates more credits than in the sky, amounting to a roughly $0.24 per gallon advantage. 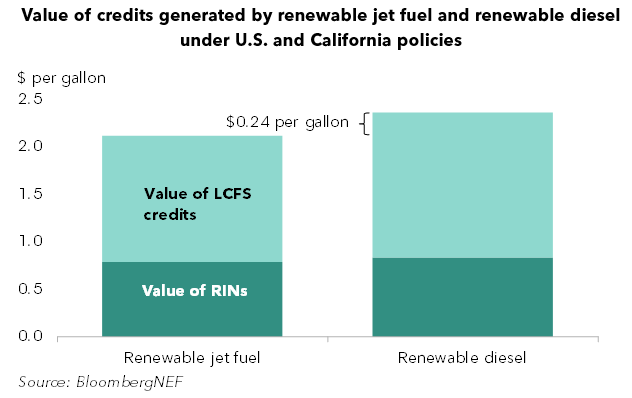 As long as the incentive for on-road biofuel exists, other sectors will be at a disadvantage, and their growth inhibited. Policymakers must standardize incentives across competing sectors in order to create a level playing field and allow biofuels in hard-to-abate sectors, like aviation, to take off.