California’s 2035 ban on the sale of new gasoline-powered vehicles is yet another nail in the coffin for the internal combustion engine. As policy makers step up, automakers shift strategy and consumer appetite grows, the future of our cars is looking increasingly electric.

There are risks ahead, namely being able to successfully scale up battery and electric vehicle manufacturing to bring down costs, ensure there is sufficient supply of critical metals, and build out charging infrastructure.

Still, the initial stages of the EV revolution have already seen annual sales rise sixfold over the past five years and, as things currently stand, the upward trajectory is set to continue through to 2050.

Here are five charts from BloombergNEF showing the ascendancy of EVs.

1. On track for another record year

As passenger EV sales keep on climbing, they are expected to reach a record 10.6 million this year, despite supply chain bottlenecks and the strain of inflation. That represents an almost two-thirds increase from 2021. 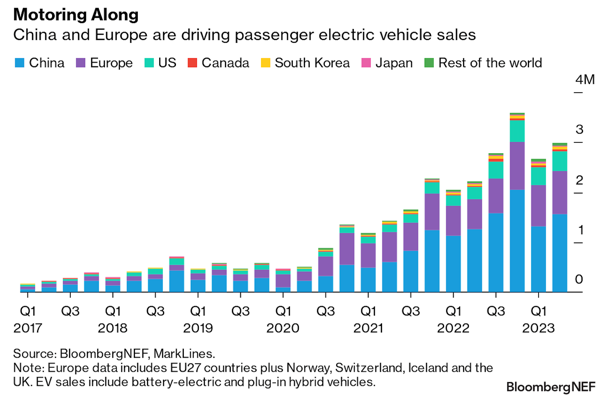 China has been the main driver of the momentum, with one in five passenger cars sold being battery electric in the second quarter of this year. EV sales in China are forecast to hit 6 million in 2022.

The appetite for EVs has also exploded in Europe in recent years, led by Germany, France and the UK, although growth is set to slow in 2022 amid wider economic pressures.

Over in the burgeoning US market, the revamping of the $7,500 tax credit for EVs as part of the Inflation Reduction Act should help propel sales further.

2. Tesla is at the front of the pack

In terms of what EVs consumers are buying, Tesla is the king of the market, having sold over 2.9 million vehicles globally to date. Its Model Y and Model 3 remain the most popular EVs in the world. 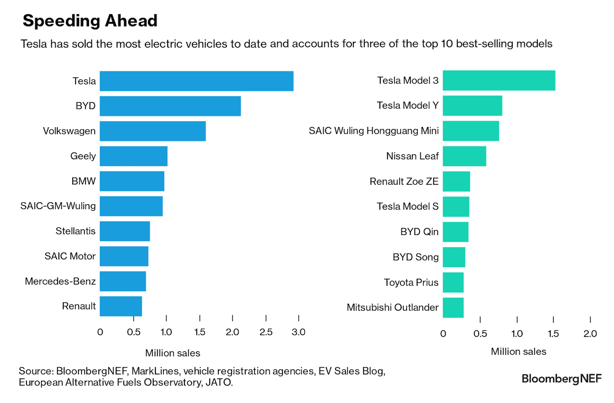 Tesla’s dominance is rooted in the US, where it has amassed a market share of more than 50%. Racing ahead of the competition, Tesla’s cumulative US sales are almost three times those of General Motors and Ford combined. Looking to close that gap, Ford plans to spend $50 billion by 2026 to accelerate its EV business, while GM aims to deploy $35 billion by 2025.

In China, the world’s largest EV market, Tesla trails homegrown rivals BYD and the SAIC-GM-Wuling joint venture, both of whom have been benefitting from a strategy of rolling out more affordable cars. The Wuling Hongguang Mini EV, a four-seater microcar that is less than 3 meters long, is China’s best-selling electric car and starts at around $5,000, compared to over $40,000 for a Tesla.

Meanwhile, in Europe, Volkswagen is in pole position, although the German automaking giant has yet to produce a car that can beat the popularity of Tesla’s Model 3.

3. A higher gear is needed to reach net zero

Under BNEF’s Economic Transition Scenario – which is primarily driven by techno-economic trends and market forces, and assumes no new policies are enacted – annual passenger EV sales are estimated to more than triple by 2025, to close to 21 million, and rise to nearly 80 million in 2050.

However, even with this level of growth, EVs would only comprise just over two-thirds of the global passenger car fleet by the middle of the century. There would still be more than 400 million internal combustion engine vehicles being driven around.

To get them off the road, all new passenger cars sold globally would need to be zero-emission from around 2035, with annual EV sales hitting a peak of 139 million in 2040. Policy changes will be critical to speeding up the switch to electric cars. 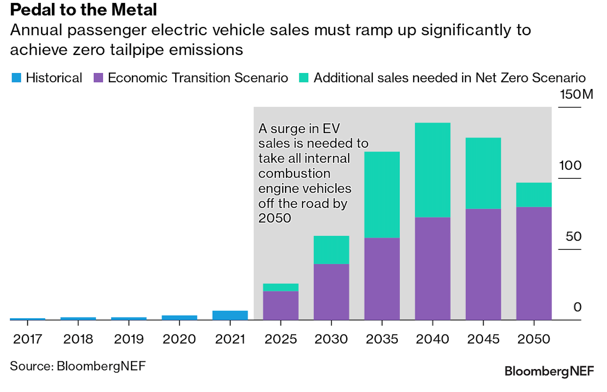 “How successfully ICE sales bans, such as those in California, Europe and the UK, are implemented will be pivotal in pulling EVs’ share of sales forward,” says Ryan Fisher, a specialist in BNEF’s advanced transport team. “Developing countries and those with low EV adoption will also require more stringent fuel-economy targets and ICE sales phase-out bans, combined with government incentives and support.”

Fisher notes that government buyback programs to pull EV sales forward and push gasoline and diesel cars off the road may also be a lever required to reach net zero.

4. The growing adoption gap is a roadblock

One significant barrier to achieving zero tailpipe emissions is the gap in EV adoption between wealthier and developing economies. While the likes of China and Europe race ahead, electric car sales have been slower to take off in countries such as India and Brazil.

In the absence of intervention, this two-tier structure is set to become more pronounced. Under BNEF’s Economic Transition Scenario, the difference between the EV share of passenger vehicles sales for leading and emerging markets is set to grow from 11 percentage points in 2021 to 44 percentage points by the end of this decade. 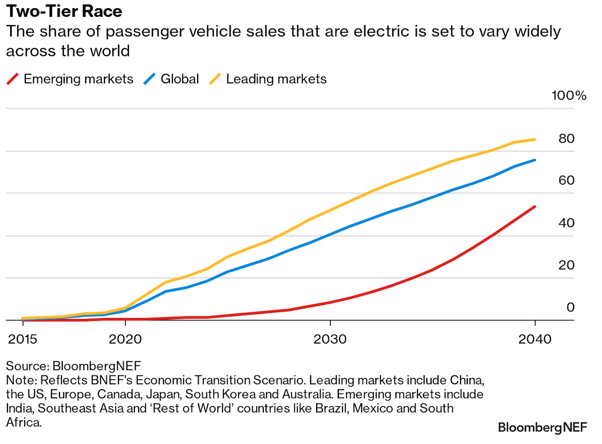 Ensuring adequate access to charging facilities is not just an issue for emerging markets, it is essential for mass adoption of EVs across the world.

“Having the expertise available within the workforce to install chargers, and getting the grid upgrades and permits complete in a timely fashion are key challenges to scaling up the charging sector,” says Fisher. “The pace of change required is exceptional and already at the beginning of the adoption curve we see these problems causing delays.” 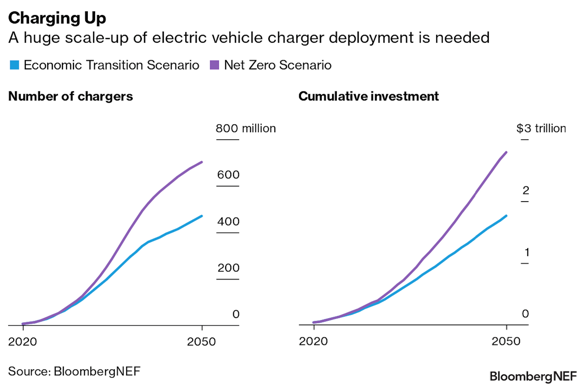 While the difference between the two scenarios looks big, Fisher points out that developed markets could make do with a smaller, more highly utilized charging network if required. “A lot of the gap is associated with building a network in countries which go from low to high EV adoption across the two scenarios,” he says.