The Way Asia Pays for Clean Energy Is Being Upended

China’s electricity price on a solar deal for Inner Mongolia plunged 44 percent last year. In India, prices to supply wind energy dropped to a record low in October. And Japan last week cut its solar-industry support by as much as 28 percent.

In all three cases, the government had adopted an auction system to determine how much it would pay developers. Across Asia competitive bidding is making the difference, accelerating a renewables boom sparked by already tumbling prices for solar panels and wind turbines. 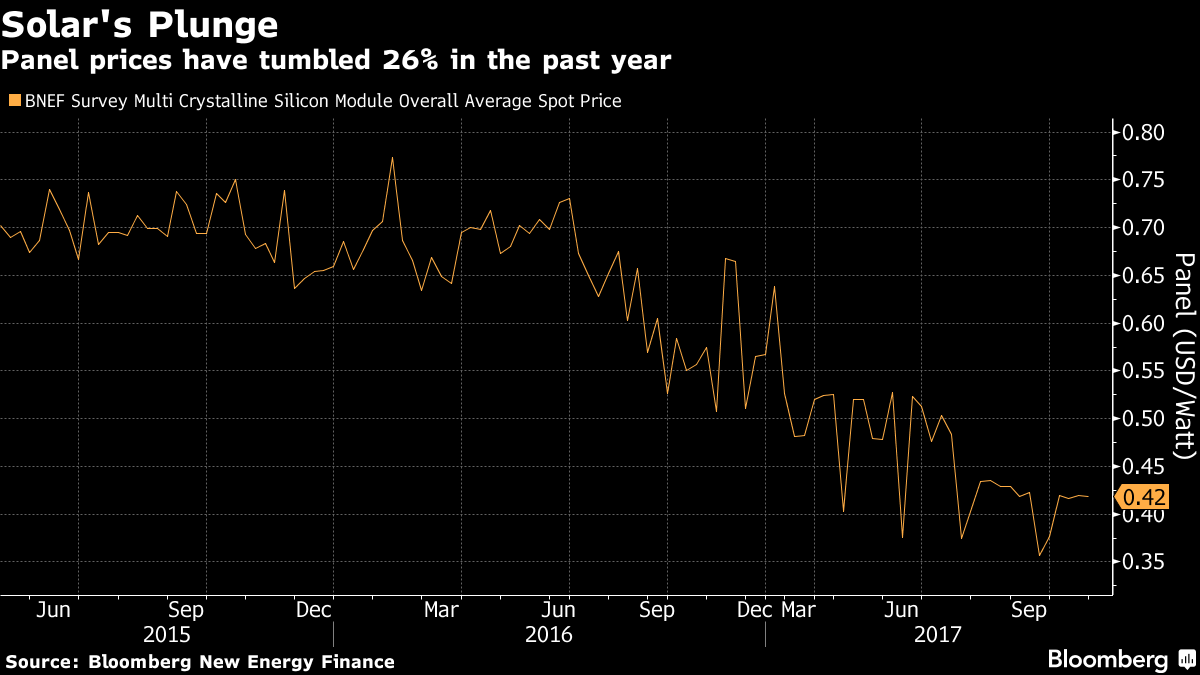 The old system relied on bureaucrats calculating how much in above-market rates developers should get as an incentive to move away from dirtier fossil fuels. Now, the builders submit bids representing the amount they’re willing to accept to proceed with a project. The lowest bids win.

“Only those that have the most efficient technology, most precise and best practice of manufacturing, most solid financing and strongest control over the supply chain can survive,” said Qian Jing, a vice president at JinkoSolar Holding Co., the world’s biggest solar-panel maker. The trend “will squeeze margins for developers,” forcing them to become more efficient and use money more wisely, Qian said.

The Asia-Pacific region has attracted the most clean-energy investment since the beginning of 2012, more than tripling cumulative solar and wind capacity, according to Bloomberg New Energy Finance data. But there’s a downside: China generates more clean energy now than its electricity grid can accommodate, a “curtailment” problem that’s the worst in the world.

The transition to an auction system is a way for governments to put a lid on what’s become a hard-to-control boom in clean-energy installations stimulated by government subsidies.

Incentives have been so enticing that developers are building on a scale that became inefficient, forcing governments to consider whether they should keep subsidizing the industry at current levels, said Zhai Yongping, chief of the energy-sector group at the Asian Development Bank. “Some governments intend to slow the growth of renewable power in order to develop it in a more efficient way” when energy-storage technology advances, Zhai said.

Bidding systems “are effective in preventing projects from being over-subsidized,” said Justin Wu, head of Asia-Pacific for Bloomberg New Energy Finance. “Most regulators are discovering competitive auctions are better in capturing the actual cost of building renewable-energy projects.”

India, which switched to auctions for wind projects earlier this year, received the lowest bids in the world to supply electricity in October, at 2.64 rupees (4 U.S. cents) per kilowatt-hour. The result, for setting up 1 gigawatt of capacity, represented a 24 percent drop from the nation’s first auction in February.

Solar is also benefiting from auctions, which have been in use in India since 2010 and yielded one of the world’s lowest tariffs globally in May. The government’s “solar-park” model, which provides land and a guaranteed stream of buyers through power-purchase agreements, has also been instrumental lowering costs.

“We are busy preparing solar parks because they are what attract marquee investors bringing tariffs down,” said Sanjay Sharma, general manager at state-owned Solar Energy Corp. of India Ltd., which conducts auctions on behalf of the government.

Still, investors might be taking on too much risk by locking themselves into 25-year supply contracts based on assumptions that module prices continue falling or the rupee keeps strengthening, said Deepak Amitabh, chairman of state-owned power-trading company PTC India Ltd.

“Then it’s a risk out of your hands,” he said. “We are surprised the way prices have fallen both in solar and wind from 4 rupees to 3 rupees and now sub-3 rupees.”

Auctions in the thermal-power sector a decade ago had a similar experience, and those tariffs ultimately became unsustainable, Amitabh said.

For now though, solar is still surging, with China on track for another year of record installations, according to BNEF estimates. The nation could add more than 50 gigawatts of solar power in 2017, exceeding the entire photovoltaic power capacity in Japan. The increase may give the government an upper hand in controlling the development of the market.

Auctions could become “the primary method to select solar-power generators by the government,” Qian at JinkoSolar said.

In Japan, the process is still in its infancy. The nation’s first-ever solar auction last week resulted in nine project approvals totaling 141 megawatts, less than a third of the capacity the government had offered as it introduced competitive bidding to cut costs.

Japan is planning two more solar auctions by the end of March 2019.