Driven by developing markets such as China and India, the global vehicle fleet is expected to increase in terms of both passenger and commercial vehicles. More vehicles on the road leads to increased demand for gasoline and diesel.  This view underpins the global investment outlook for upstream oil and refining. 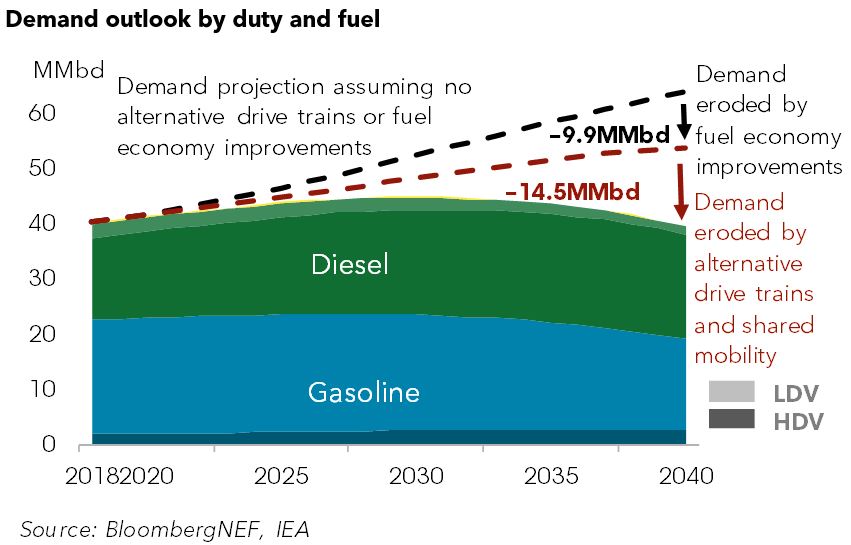 BloombergNEF have identified three disruptive forces that threaten to impact the demand outlook for gasoline and diesel.

In our Road Fuels Outlook, we forecast oil demand across the light and heavy duty vehicle sectors to peak in 2030 at 45.1MMbd before declining to 39.6MMbd in 2040, despite significant growth in the global passenger and commercial fleets.

Clients can access the 2019 Road Fuel Outlook on The Terminal or on web.

Mandated fuel economy improvements are the most effective way to reduce oil consumption and emissions before 2030, according to BNEF analysis. The U.S. and China each have policies in place to improve the fuel economy of light duty vehicles (LDVs) to 2025, and the EU to 2030. Other markets are impacted by regulations in these countries as they seek to develop competing legislation or inherit fuel economy improvements through importing second-hand vehicles to meet domestic demand.

Fuel economy mandates are new to the heavy duty vehicle (HDV) segment. China and the U.S. mandated fuel economy improvements in 2012 and 2014, and European standards come into force in 2020. Historically, unlike the LDV market, fuel economy levels of HDVs have not improved over the last decade. 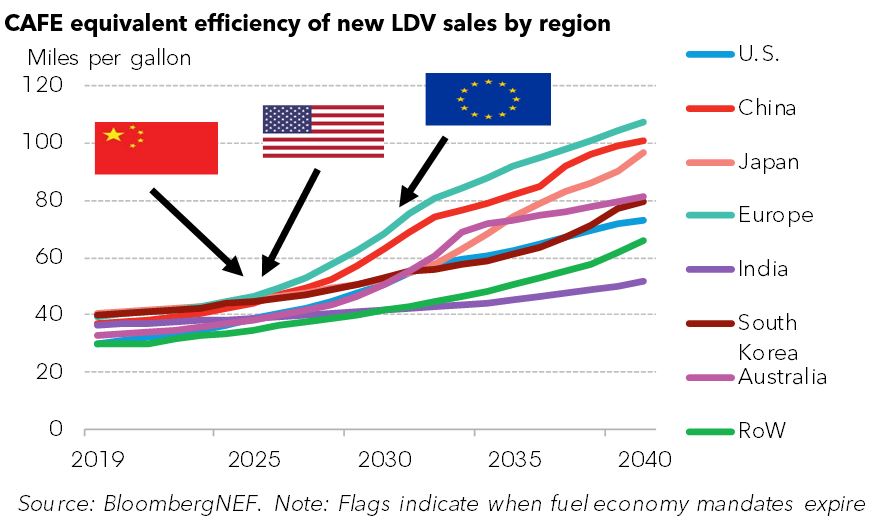 Alternative drive trains include natural gas, hybrid and electric vehicles. BNEF expects these to rapidly penetrate both the LDV and HDV markets, adding in excess of half a billion alternative vehicles to the global fleet by 2040. China will experience the strongest uptake of electric vehicles of all the regions covered in our analysis, with the proportion of electric vehicles growing from 1% to over 50% in the LDV fleet, and to 27% in HDVs by 2040. Consequently, we see Chinese demand for road fuels in 2040 to be less than today, despite the number of vehicles on the road almost doubling in that time.

Shared mobility services such as Uber, DiDi Chuxing and Grab help satisfy rising demand for transport in developing markets, and will lead to an additional 2 trillion miles travelled by 2040. Additionally, BNEF expects that EV adoption by shared mobility services will increase faster than that of privately-owned vehicles due to better economics. Autonomous vehicle technologies are expected to arrive in the second half of the 2030s, by which point EVs are forecast to be cheaper than equivalent ICE vehicles, so that autonomous vehicles are likely to be electric. 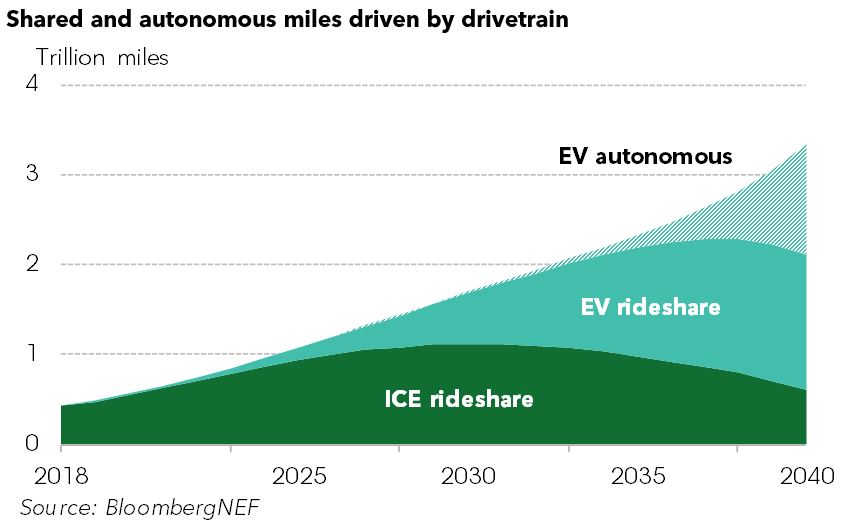 Finally, how will these forces impact CO2 emissions? According to BNEF analysis, oil-related CO2 emissions from road transport won’t have changed much from today’s levels by 2040. While the U.S. and Europe will see major reductions in CO2, this will be counteracted by increasing mobility and freight demand from developing markets.

Clients can access the 2019 Road Fuel Outlook on The Terminal or on web.