U.S. LNG to Shut in Before Gas Replaces Coal in EU Power

Exporters of U.S. LNG may be forced to keep gas at home during the next seven months despite the potential demand in the German power sector, according to BloombergNEF analysis. European and U.S. gas forward prices would have to drop for gas to be cheap enough to replace all hard and brown coal (lignite) in Germany. 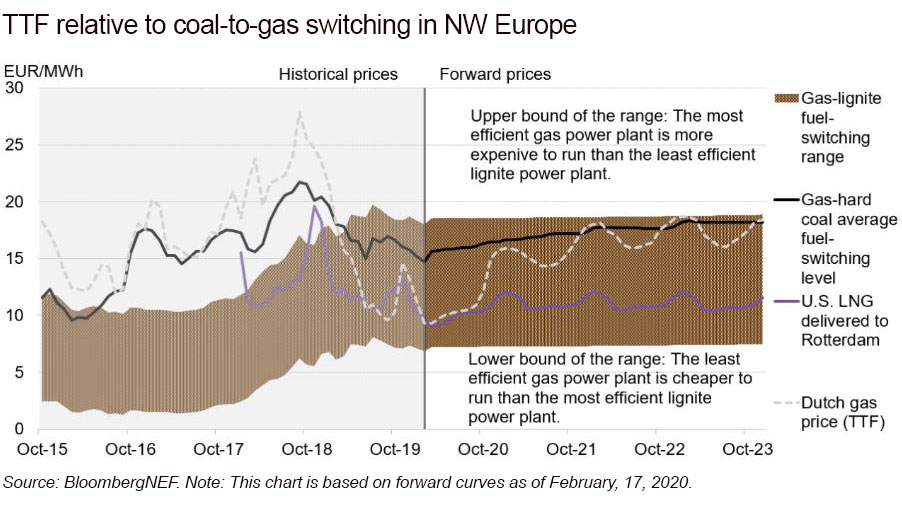 Global gas prices currently indicate LNG supply from the U.S. will wane before all possible European gas demand is maximized. At current forward prices of U.S. and European gas, the profit margins of delivering U.S. LNG to Europe are thin. In Asia it is a similar story. This puts U.S. LNG exports at risk of so-called “shut-ins” over the summer. By contrast, TTF – the European gas benchmark – would have to drop another 2.90 euros/MWh on average for least efficient gas generator to be cheaper than the cheapest lignite-fired power station. The cheapest lignite station is one that only pays for the cost of EU carbon allowances and treats fuel as zero marginal cost.

The lignite fleet in Germany generated 11.1 gigawatts of power in March-September 2019. If this was all replaced by gas generation it would be equivalent to 48 million cubic meters of gas demand, more than double the amount consumed in the German power sector over the same seven months.