London, October 7, 2021 – China continues to dominate BloombergNEF’s (BNEF) global lithium-ion battery supply chain ranking in both 2021 and its projection for 2026, thanks to continued investment and strong local and global demand for its lithium-ion batteries. China hosts 80% of all battery cell manufacturing capacity today, with capacity expected to more than double to over two terawatt-hours, enough capacity for more than 20 million electric vehicles (EVs), in the next five years. Yet, as governments around the world recognize the strategic importance of the battery industry, local supply chains are emerging to challenge China’s dominance.

The U.S. moves up the ranking to come second in both 2021 and 2026. As a country, the U.S. has the second largest EV market globally, after China. Tesla and Asian cell manufacturers continue to make significant investments in the country, and the Biden administration’s policy to help establish a domestic battery supply chain and support EV growth will further strengthen the country’s position.

James Frith, BNEF’s head of energy storage, said: “The U.S. has many of the ingredients needed to foster a domestic lithium-ion battery value chain, but in the past, individual companies like Tesla have had to forge a path by themselves. Now that there is policy support in place, we are seeing a coordinated effort from companies across the supply chain to anchor more value within the country.”

European countries are also rising up the ranking as passenger EV sales steadily grow, attracting more investment in the supply chain. Nordic countries are increasingly important to Europe’s efforts, as their low-carbon power supplies make them attractive to environmentally conscious companies. Finland will soon be home to one of the world’s largest refineries for nickel and cobalt sulfate, both key ingredients for use in EV batteries. Battery material producers Umicore and BASF have also both invested in the country. Later in 2021, batteries are expected to roll off the production line from the first European-owned gigawatt-hour scale cell plant, when Northvolt commissions its Swedish facility.

While European countries are ranked individually in the BNEF report, the ability for tariff-free trade between countries in Europe means that, as a continent, its battery demand is second only to China. If ranking Europe as a whole, it comes first in our ranking in 2021 and 2026.

Cecilia L’Ecluse, energy storage analyst at BNEF said: “Europe has set the ambitious goal of supplying all of its own battery demand for the region by 2025, and has committed billions of euros in state aid to attract investments in the battery supply chain. We are now starting to see the results of this effort.”

South Korea and Japan rank lower in 2021 compared to last year, but Japan is on track to rise up through the ranking to take third place in 2026, as domestic demand increases alongside continued investments in materials refining and component production. However, Japan and South Korea’s environmental scores continue to hold them back, a result of the high carbon intensity of their power grids. While not everyone values sustainability when it comes to lithium-ion battery manufacturing, automakers have increasingly high standards for the carbon footprint of battery cells. 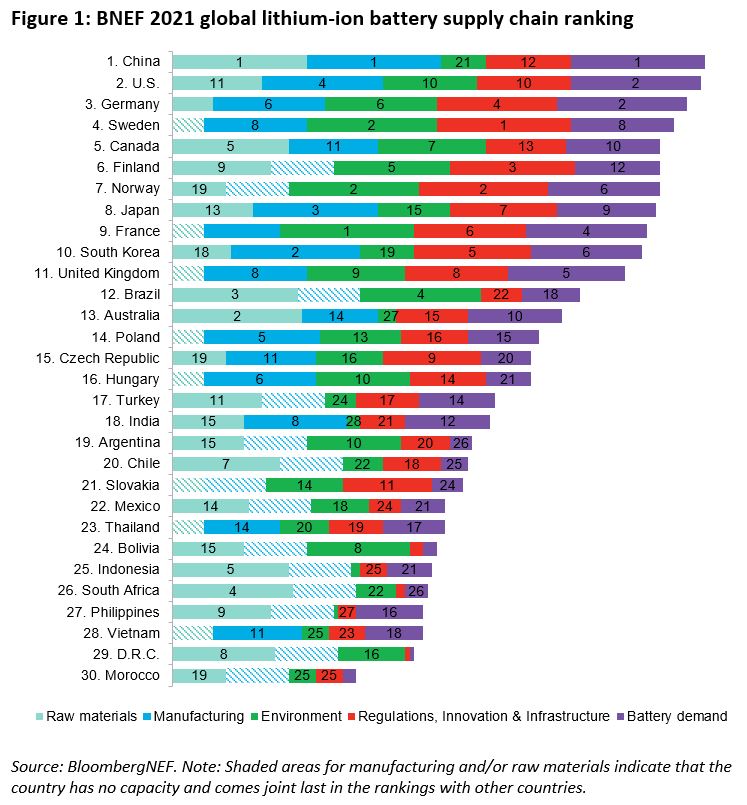 Most resource-rich countries rank lower in the supply chain ranking as they generally lack a domestic battery supply chain and battery demand. However, some of these countries, such as Australia and Finland, have managed to move up the rankings.

Allan Ray Restauro, metals analyst at BNEF commented: “A few resource-rich countries are leveraging their metals supply to attract more investments into their domestic battery industry. Indonesia is shifting its focus downstream to become a key player in the global battery value chain, while Canada and Finland are looking to provide a greener alternative for battery metals supply. Countries like Australia, Philippines and South Africa also have potential to capitalize on their resource wealth to retain more value from the supply chain.”

In the report, BNEF ranks 30 leading countries across the lithium-ion battery supply chain based on 41 metrics across five key themes: availability and supply of key raw materials; manufacturing of battery cells and components; local demand for electric vehicles and energy storage; and policy and environmental considerations.

(On October 8, 2021 BNEF updated figure 1 in this press release to reflect correct values for countries ranked 15-30.)