The US is on course to more than double its gas liquefaction capacity over the next five years. With three projects slated for final investment decision this year, the country’s annual LNG export capacity is expected to reach 169 million metric tons by 2027, placing it far ahead of the world’s second-largest exporter, Qatar.

“The US is in the lead because of its flexible contract terms and the competitive landscape of project developers,” said Michael Yip, BloombergNEF’s global LNG specialist. “Its aggressive but transparent pricing and reliability as an LNG supplier has made it easy for these new projects to secure contracts.”

Contracts with US projects made up 89% of deals in 2022. Once roughly 75-80% of an LNG project’s capacity is contracted, funding gets unlocked, and construction can begin. 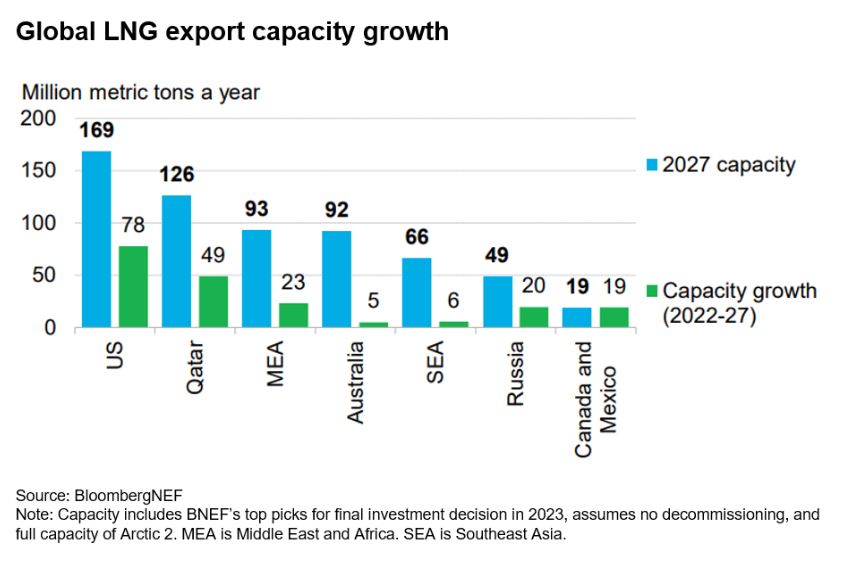 “The US will become more of a global gas player,” said Enrique Gonzalez, BNEF’s lead analyst for US gas. “Unlike in the past, prices in its domestic gas market will be more connected with the rest of the world.” 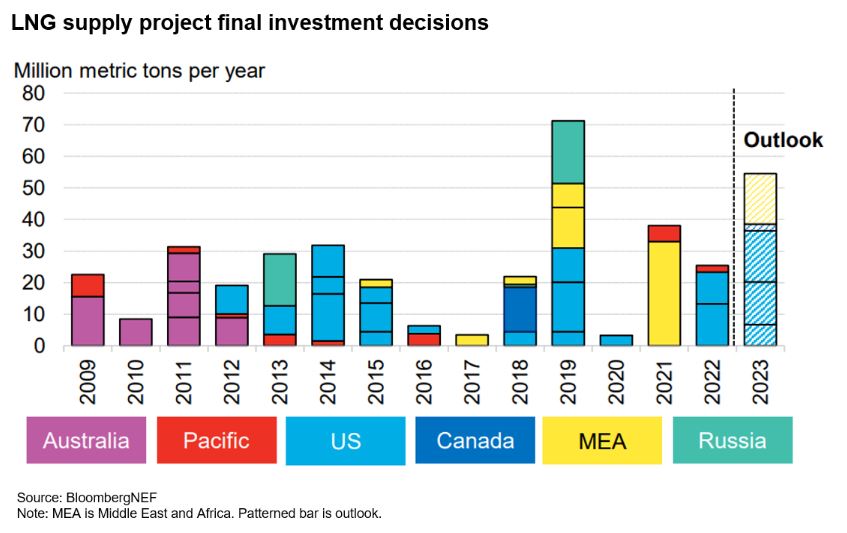 Other potential ‘wildcards’ in the queue for approval in 2023 are Energy Transfer’s Lake Charles LNG, Venture Global’s Calcasieu Pass 2 LNG, New Fortress Energy’s ‘Fast LNG’ concept in the US, and TotalEnergies’ Papua LNG.

Global LNG demand is forecast to reach 401 million tons this year, a 2% uptick from 2022, while global LNG supply is set to grow 3% to an estimated 415 million tons. The jump in supply is driven by Venture Global’s Calcasieu Pass reaching full capacity post-commissioning, and Freeport LNG resuming operations in the first quarter of this year.

New projects aiming to begin operations in 2023 include the Tortue floating LNG project, on the maritime border of Senegal and Mauritania, Tangguh Train 3 in Indonesia and the deployment of the Tango floating LNG vessel in the Republic of Congo.